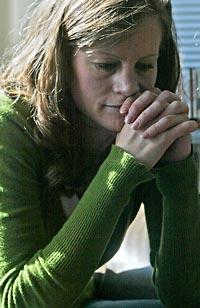 Amy Wales had graduated from college and was living in London when she got word that her father had been fatally shot in Seattle in 2001. She now once again lives in Seattle. (ALAN BERNER / THE SEATTLE TIMES)
By Steve Miletich and Mike Carter
Seattle Times staff reporters

The premonition came in early October 2001. Amy Wales dreamed that her father — federal prosecutor Thomas Wales — had been shot.

She was living far from home, in London, after graduating from college. The 9/11 terrorist attacks against the U.S. had occurred only weeks earlier and she was feeling unsettled.

She called home to Seattle and left a message on her dad's answering machine.

When he called back, he said, "I'm very much alive. Don't you worry."

He joked that Amy and her older brother, Tom, would someday be caring for him in old age, wondering what to do about his flirting with old ladies at a rest home.

Thomas Wales was only 49 when he said that. A week later, he was shot to death.

This week will mark the fifth anniversary of Wales' killing. Investigators believe he was shot in an act of revenge by someone he had prosecuted, which would make him the first federal prosecutor ever killed in the line of duty.

Amy Wales learned of the shooting when she got an early morning phone call from her mother, who was in Frankfurt, Germany. The couple had divorced after the children were grown but had remained close. In a shaky voice, Elizabeth Wales said that "Pa" — the family's endearment for him — had been shot.

In shock, Amy Wales called an uncle on his cellphone. The uncle, who was in Harborview Medical Center's emergency room, first reported that Thomas Wales was in surgery. He then called Amy back to say that her father couldn't be saved.

Now 27 and living in Seattle, Amy Wales says she remembers that day — Oct. 11, 2001 — with "great clarity, visually and emotionally." For Amy and her family, it is known simply as "10/11," a personal day of grief added to the weight of the nation's tragedy.

Five years later, no one has been arrested even though the FBI has focused its investigation primarily on one suspect, an airline pilot whom Wales once prosecuted. The pilot rose to the top of the suspect list within hours of the shooting; he and Wales had clashed before in court. Investigators say there is intriguing, even compelling, evidence against the pilot but not enough to indict him.

Amy Wales is willing to wait: "I remain patient that the investigation will be resolved in a way that would make my father proud."

He would want hard evidence before anyone is arrested, she said.

Thomas Wales worked in the U.S. Attorney's Office in Seattle for 18 years, handling mostly white-collar cases. He was viewed as tough but fair, sometimes helping those he sent to prison find jobs later, or allowing defendants to work off prison time by talking to others about their mistakes. He also was president of Washington CeaseFire, a gun-control advocacy group.

At home, he was playful. He, Elizabeth Wales, Amy and Tom moved from the East Coast to Seattle when Amy was 5. They moved into a cozy Craftsman home atop Queen Anne hill on Hayes Street.

Amy remembers it as the scene of rollicking adventures with her father, the "belly monster" who crawled through living-room caves made from chairs and sheets. As they grew older, he would lead the family in animated dinner-table discussions.

"To my brother and me, us kids, he was the heart of hearts, our center — everything," she said.

Today, she carries on his legacy as a founding board member of the Thomas C. Wales Foundation in Seattle, which among other things rewards ordinary citizens for civic leadership. She is looking for employment, after recently leaving a job with a nonprofit agency.

Her brother, an academic living in London, will deliver an anniversary eulogy Wednesday at a private memorial at the U.S. Courthouse in downtown Seattle.

It will recall the night Thomas Wales was shot several times through a basement window while sitting alone at his computer.

Weeks after the killing, Amy Wales returned to the house, which has since been sold. On her first visit, she sat on a dark stain on the basement concrete, where blood had seeped through a rug. She could picture her father the night he was killed, sipping a glass of good wine with the family cat, Sam, nearby.

Sometimes, she said, she'll let herself imagine what must have transpired when her father was shot. It's troubling, but "sometimes I do it to comfort myself in a way, to try to be there with him in that moment."

The FBI's primary suspect in the case is a pilot with deep roots in the Seattle area. The pilot, now in his 40s, graduated from the prestigious Lakeside School in Seattle, lived for years in a quiet Bellevue neighborhood before recently moving to Snohomish, and has worked for US Airways and Republic Airways.

Friends say he is being unfairly targeted only because the FBI needs a suspect. They describe him as charming and helpful, the kind of person willing to fix a neighbor's plumbing.

Others paint a darker picture. In interviews and court documents related to a divorce and allegations of harassment, his ex-wife and three former girlfriends portray him as manipulative, controlling and volatile, demanding, for instance, that the women wear lingerie around the house and always tell him if they were going somewhere.

In court documents, one of them once described coming home and finding guns scattered around the house, which she took as a threat.

Wales prosecuted the pilot and others on charges they converted a military helicopter to sell as a civilian model. After four years in the courts — and after the pilot amassed legal fees of $125,000 — the criminal charges were dismissed in July 2001 as part of a deal in which the defendants' company pleaded guilty to a misdemeanor and paid a fine.

The pilot sued for malicious prosecution, saying the case had been constantly on his mind and affected him emotionally. His suit, pending when Wales was killed, later was dismissed as groundless.

The investigation into Wales' killing has been difficult from the beginning, said Charles Mandigo, who was the special agent in charge of the FBI in Seattle when Wales was killed. The initial investigation was "snake bit," he said, noting that shell casings were initially missed at the crime scene.

Most significant, though, was the fact that the Justice Department, reeling from the Sept. 11 terrorist attacks, just didn't pay enough attention, Mandigo said.

"It got overshadowed," said Mandigo, who has since retired from the bureau.

The only witness to see the assailant reported someone had walked quickly from the house about 10:40 p.m. and had driven away. She didn't get a good look at the person in the darkness.

The pilot has told others he was home alone at the time Wales was killed, and that he has a billing record of a telephone call he made from there to prove it.

Investigators have suggested someone else might have placed the call or that a call-forwarding trick was used to create a record.

In their hunt for evidence, investigators three times have searched houses owned by the pilot in Bellevue and Snohomish. His friends have been called to testify before a grand jury, and the FBI continues to search nationwide for a unique gun barrel used in the killing.

Early this year, when the case seemed to have stalled, the FBI received an anonymous letter from Las Vegas. The writer claimed to be a hit man hired to kill Wales, but investigators concluded the letter was a hoax meant to throw them off. They also learned the pilot had been in Las Vegas about the time the letter was mailed.

Throughout, the pilot has declined to be interviewed by the FBI and has refused to talk to reporters. The Seattle Times is not naming him because he has not been charged.

Investigators have long believed there are people who could help them but are reluctant to come forward, even with a $1 million reward. At least one person with key information has refused to testify in front of the grand jury, citing fear of the pilot.

A call for courage

If there are people withholding information, Amy Wales said, they should break their silence.

"I would say to that person or persons that he or she should not be afraid and have the courage and bravery to step forward and do what is right."

To many, the shooting represented an attack on the legal system.

For Amy Wales, it's simpler. It's not having her father around to teach her more about catching mackerel or to help her face young adulthood.

She misses the "goofball" side of her father, who would fart loudly while they were jogging, holding his arms in the air and proclaiming he was jet-propelled. She also misses his "instructive" side — when he would question her decisions in his "lawyer voice."

In May 2001, she saw him in Boston, shortly after she graduated from Middlebury College in Vermont. She was about to venture out to London, to work for a social-advocacy group.

They stood outside. The streetlights, she vividly recalls, cast a muted yellow glow.

He then gave her what she now calls a great gift: He told her how proud he was.

They hugged for a long time.

"And that was the last time I saw him."

Amy Wales, daughter of Thomas Wales, fondly remembers her father's "goofball" side as well as the principles by which he lived. (ALAN BERNER / THE SEATTLE TIMES)

Amy Wales, brother Tom and father Thomas at the Japanese Garden at the Washington Park Arboretum in the mid-1980s. 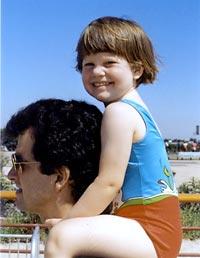 Thomas Wales was 49 when he was killed.

Fifth anniversary of the slaying of Thomas Wales

The FBI will hold a news conference to discuss its investigation, including the search for a suspect, the nationwide hunt for a unique gun barrel used in the killing, and efforts to identify the writer of an anonymous letter mailed from Las Vegas in January claiming responsibility for the slaying.

Friends and colleagues will gather for a private memorial at the U.S. Courthouse to honor Wales.