"Omakase" is a word as magical as "abracadabra" and as mystical as "Open sesame!" best employed while seated eye-to-eye with a sushi chef whose hands — and colorful wares — are clearly visible. By saying "omakase" when you're eye-to-eye with a sushi chef, you've tendered your ticket for a meal and a show that, in the best of all worlds, is full of delicious surprises.

Uttering "omakase" to an unfamiliar sushi chef, though, is the culinary equivalent of going on a blind date with a hot-looking prospect: You never know what you're going to get. And it's a meal that may (or may not) cost dearly, depending on the whim of the chef in charge.

When, on a recent evening, I said the magic word to Kotaro Kumita, co-owner and chef in charge of the sushi bar at Shun, near University Village, he made certain there'd be a second date. And a third.

Open since June, the place has been embraced by everyone from University of Washington students, to families with young children, to guests staying at the Silver Cloud hotel across the street. Native Japanese flock here, and many regulars apparently know the owners from their previous gigs. Formerly the long-lived Thai Dusit, Shun has been made over with dark plank-wood flooring, polished tables, a compact sushi bar and classic Japanese artwork for a spare, minimalist look.

I watched as he handled his knife (deftly), his garnishes (with an artist's touch) and his rice (lightly seasoned, vaguely warm and fashioned with restraint). I looked on as Kumita-san carefully considered an array of pretty tableware before deciding which best set off his dark-fleshed sockeye salmon, unbelievably sweet Hokkaido scallops, melting Spanish bluefin tuna and kelp-wrapped saba (marinated mackerel). And I noted the care with which he chose his ingredients, ditching a nori wrapper that lacked the appropriately crisp texture — before twirling rice and toro into a proper handroll.

"Hai!" I said when offered sake by efficient Japanese waitresses: young women who know how to shift into gear when wannabe diners jam the entranceway overlooking this small cafe. "Oh, my!" I said, when the chef presented me with the teensy deep-fried vertebrae of fresh ocean smelt: hot, salty and better than the best fries I've ever eaten. I was especially thrilled to learn that back in the kitchen, co-owner Yoshi Nishizawa (late of Nishino) was preparing matsutake dobin mushi — a dish that gives credence to the name Shun: translation, "seasonal."

Imagine the lightest, smokiest of "teas" made when matsutake mushrooms are steeped in dashi, garnished with shrimp and gingko nuts and presented in a teapot-like dobin whose lid is removed to release its clear perfume. That broth tasted as it should: like autumn, distilled.

At the end of a meal that began with a thick slice of daikon (cooked radish) and rich morsels of hamachi kama (yellowtail collar), moved on to bite after blissful bite of modestly proportioned nigiri (each slice of fish a perfect mouthful), ending with tamago (sweet omelet fastened with a belt of dried nori) and costing about 50 bucks, I was sold.

Having eaten here in fair weather and foul, I suggest bringing a sweater. You may need it to ward off the chill from ill-positioned air-conditioning ducts, or cold air blowing through doors that open onto a small parking lot. But there's an even better way to warm up: with chawanmushi — shiitakes, shrimp and spinach suspended in a silky savory custard.

In addition to a mix of clean-tasting seafood and/or vegetable tempura — and perhaps with a nod to the kids — chicken tempura is also an option. Too bad those tender wands of white meat had been doused with a salty overdose of soy sauce and grated daikon. Next time, I'll order the sauce on the side knowing that special orders for, say, spicy octopus salad or an "appetizer" portion of sashimi are accepted with good grace.

Other let-downs included overcooked soba noodles whose accompanying condiments did little to offset their inferior quality. And seriously oversalted oshinko (assorted pickles) that tasted commercially processed. Bara-chirashi, a rice bowl wearing a mish-mash of seasoned raw fish, served tableside one night when the joint was jumping, was less than appealing and a far cry from the same dish served at the sushi bar during an early lunch visit when it was artistically crafted for full visual effect.

But given my time spent at the sushi bar, and reasonable prices for everything from appetizers to sushi combos to grilled dishes — including sliced wafu beef cooked precisely to order, and miso-marinated salmon that tasted like a cunning cross between deli lox and Native American smoked salmon — this neighborhood newcomer gets the big nod from this Japanese food fan.

Share your news or restaurant tips with Nancy Leson: 206-464-8838 or nleson@seattletimes.com. 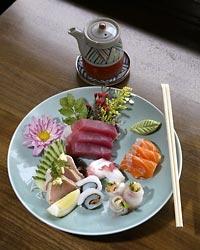 Assorted sashimi gets the artist's touch at Shun. (DEAN RUTZ / THE SEATTLE TIMES)

Drinks: A limited number of wines and spirits available, though most guests opt for sake or Japanese beer.

Sound: Gets loud with a crowd.