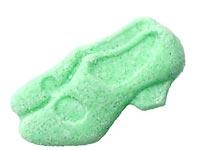 From a very early age Julia Harrison recognized the hierarchal order of candy. There was the candy that you ripped open without a modicum of finesse and shoved right away into your mouth. One's Halloween booty, say. Then there were the sweetened marvels that gave pause: a piece of gum shaped as a taco; or a candy carat shaped like a gem.

One of Harrison's earliest candy memories was the time she visited a science museum and watched transfixed as a man created a menagerie of sweets — a turtle, a dragon, a crane, each fashioned the way a glass-blower blows glass. She was one of the lucky few to be handed one of these treats. Back at home, though, she refused to eat it. Her crane turned into goo.

But Harrison, 32, has now made her own batch of candy. A pink shoe. A green suitcase. A blue boarded-up window. Available for free at Seattle's KOBO at Higo art gallery until the stock runs out, which is likely to be soon.

The candy, though, was always meant to do more than just satisfy some sugary jones. It was a way for Harrison to tell the story of a Seattle neighborhood transformed when the United States interned those whose pedigrees traced back to Japan.

It was also a way for Harrison to draw attention to a particular Japanese confectionary technique that's about to vanish soon. And so what started as a mere curiosity emerged into a years-long project that transformed Harrison, already a woodworker and cultural anthropologist, into a momentary confectioner.

"Everywhere I go I'm always looking around for sweets you can't get anywhere else," Harrison says. "One of my weird goals is to do these travel guides for people like me who are obsessed with sugar."

Harrison sits in the Fresh Flours bakery/cafe in Phinney Ridge, her latest haunt and the professional kitchen where she ended up making her sweets called higashi.

Persuading the bakery owners to let her use their kitchen came after she secured her professional food handler's license. And after she took a local Japanese-candy-making class. And researched the consistencies of various types of sugar. And spent two weeks in Friday Harbor carving her wooden candy molds.

But first, Harrison roamed Seattle's Chinatown International District, finding her way into the old Higo Variety store, a landmark in what used to be the city's Nihonmachi, or Japantown. At Higo, now the KOBO art gallery, there are nooks where time has stood still.

Back in the day, Higo's shelves offered rice cookers and kimono fabric; paper fans and tricycles; Bachelor Girl Two Way Stretch Hose. It was a place to shop, a place to meet friends. And after it stood shuttered during World War II, its owners and its customers shuttled off to the Minidoka internment camp, it was a place to purchase the essentials for starting over.

As everything around it changed, the Higo Variety Store remained mostly the same for some 70 years until the Murakami family closed it in 2003 and the building was turned over to husband-and-wife gallery owners. But Binko Chiong-Bisbee and husband John determined the past was too valuable to pack away. And so they dusted off the old Higo glass cabinets, repainted the shelves and unearthed old store and family artifacts. Those items are now showcased amongst the new ceramic dishes and paper lanterns for sale at the Jackson Street shop.

Enter Harrison, originally from Nashville, who initially settled in Seattle to pursue a master's in fine arts degree at the University of Washington. Harrison once lived in Japan and Australia. She loves being a foreigner, so whenever she wanted to experience that feeling of being somewhere far away, Harrison used to wander the old Japantown and the aisles of the old Higo store.

She has no ancestral connection to Japan, only a strong affinity for the culture and the country, first sparked by the year she spent teaching English in Tokyo. While there she indulged in Japanese sweets. And in Seattle, as part of her graduate studies, she studied the traditional Japanese tea ceremony. A cup of tea is customarily served with sweets, candy or small cakes.

When it comes to cultural anthropology, Harrison loves looking around and assessing what's most vulnerable to being lost — and what can be preserved. So upon discovering that certain Japanese sweets were fashioned out of handcarved wooden molds — she's a woodcarver, after all — and after learning that only three men in Japan still handcarved these molds and it appeared there were no apprentices in the wings, Harrison decided to see what she could do.

"I started to realize that these molds were not part of anyone's collections. I started looking around for a written history, and I couldn't find much," she says.

So she began carving, experimenting with various woods because the customary wood for such molds, called kashigata, isn't available in this country. She decided to carve 20 molds that visually represented the history of Japantown. A hand, for example, is modeled after one of the mannequin hands found in Higo. A bowl of noodles used to be a neighborhood neon sign.

She figured out a way to avert the high cost of using a specialty sugar by using a cheaper one in her candy recipe. And then she worked two graveyard shifts in Fresh Flours, whose owners are Japanese and who immediately understood what Harrison wanted to do.

The candy project is entitled "A Lingering Sweetness." She made 500 pieces and about half remain, to be distributed as part of a lecture at KOBO at Higo on Saturday, which will include cups of tea.

The project was one of the last things Harrison completed before moving last week to London, where she's pursuing a Ph.D. Her research topic (no surprise): these candy molds.

Mannequin hands at KOBO at Higo art gallery in the Chinatown International District inspired one of the wooden candy molds, created by Julia Harrison to revive a dying tradition. (THOMAS JAMES HURST / THE SEATTLE TIMES)

"I started to realize that these molds were not part of anyone's collections. I started looking around for a written history, and I couldn't find much," says Julia Harrison, cultural anthropologist and wood carver, of how she started on the journey that led to the exhibit "A Lingering Sweetness." (THOMAS JAMES HURST / THE SEATTLE TIMES) 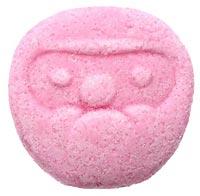 Julia Harrison carved 20 candy molds that visually represent the history of Japantown. A bowl of noodles, for example, used to be a neighborhood neon sign. (THOMAS JAMES HURST / THE SEATTLE TIMES) 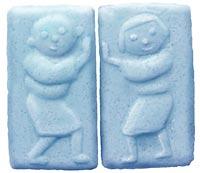 "A Lingering Sweetness: Confectionery Celebrating Seattle's Historic Japantown" KOBO at Higo, 604 South Jackson St., Seattle; 206-381-3000. Gwen Stamm will lecture about the Urasenke way of tea and Japanese confections at 1 and 3 p.m. tomorrow. Tea and the candies created by artist Julia Harrison will be served. The carved wooden sweet molds will then remain on display at the gallery through the middle of this month.