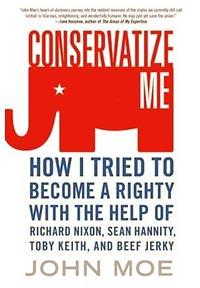 "Tootsie," "Black Like Me," "Alias" — pop culture's filled with daring men and women who alter their identities to infiltrate different groups.

Now Seattle-based NPR personality John Moe has come out with a virtual "Crying Game" of political books: "Conservatize Me: How I Tried to Become a Righty with the Help of Richard Nixon, Sean Hannity, Toby Keith and Beef Jerky" (William Morrow, $24.95). His hilarious "experiment": shed the trappings of his liberal life and spend a month immersed in conservative culture — or rather, stereotypes — with the help of a power suit, puffy flag T-shirt and the music of Toby Keith.

I debriefed the radio commentator, 38, as he was settling back into his old life, over frou-frou coffee drinks.

Q: Here's an ice-breaker: Is your book intended to change anyone's politics, or mainly something to amuse your effete, godless, liberal peers?

A: [Laughing.] The godless liberal peers have plenty to amuse them already. They're well amused. It's not intended to change anyone's mind. It's intended to stretch everybody's mind. I came away from it much more agnostic about the idea of, you're left or you're right, you're red state or you're blue state, you're Limbaugh or you're Franken, and much more about degrees and ambiguities and multiple solutions for some issues, and no solutions for other issues. And so I think we can all hate each other less if we listen to each other more.

Q: Isn't your book's subtitle like "How I Tried to Become a Lefty by Eating Brie, Undermining Our Troops and Marrying a Dude?" — an Ann Coulter cheap-shot, but with intentional humor?

But for the purposes of my experiment, the only way I could really do it was in a highly personalized way. So I took the things that to me represented conservatism and went with them head-on.

A: I went online to freerepublic.com, which is a highly conservative, militantly so, Web site, and posted something saying "Raised a liberal, wanting to find out what movies conservatives enjoy, wanting to see if there are movies that could change my mind. Whattaya got?"

I came away from that with a bunch of suggestions. So I went to Blockbuster and got "Red Dawn," "Stand and Deliver," "Dirty Harry," "Forrest Gump," all three "Lord of the Rings" movies and "Patton." And then I would watch those in my down time as I was flying to the Nixon museum in L.A. or the Toby Keith concert in Indianapolis and do write-ups on their persuasiveness.

Q: How are the "Lord of the Rings" movies conservative with all those gay hobbits?

A: Keep in mind the striking similarities between Sam and Tony Blair. "Here's this mission that we're going off on. We've got to go do this thing that nobody understands." "OK, I'm with you." So in this analogy, Frodo is George W. Bush, Sam is Tony Blair and Bilbo, conveniently, is George H.W. Bush.

And I maintain that if George H.W. Bush had acted like Bilbo when he actually has that ring for that moment and gets all bug-eyed and crazy, he might have beaten Perot and Clinton.

Q: What did you learn from interviewing Jeff Gannon, the former male prostitute who lobbed all those fawning questions in the White House press briefings?

A: What I found out in talking to him, his whole thing was he wanted to be a right-wing pundit. He wanted to be Sean Hannity and Ann Coulter and have his own show on Fox News and his own book with him smirking on the cover of it. He wanted the whole thing and he just didn't figure that anybody would ever track down what he'd done in the past online.

Q: You also fired guns at a local range. Two questions: Why are guns conservative, and why is "shoot someone in the face" almost ALWAYS funny?

A: Because the vice president shot someone in the face! [Chuckling.] That's why that phrase is funny. And the fact that the guy didn't die — which makes you wonder, how do you get shot in the face and be like 80 and not die?

I think they might represent power. And I think they're conservative because of that libertarian appeal. Not only do you have a right to freely roam this country and travel the interstate highway system, you have this killing power, this shooting power, and you're not going to have big government to control you doing that — that'll mean lower taxes — and then you just assume those rights and responsibilities at the same time.

Q: Conservatives revere our Constitution, you found. So why is the Second Amendment untouchable while the First, Fourth and others are looking like Swiss cheese?

And I think the conservative belief as it was articulated to me was, "Look, if you believe in the First Amendment, Lefty McLiberal — How's your latte? — and if you want that untouched, then the Second should be untouched and the Fourth should be untouched as well. And you shouldn't have to quarter soldiers in your house if you don't really want to.

Q: I hate quartering soldiers in my house!

A: I know! It's a drag. "Soldiers can you pick up those towels please?" But that's where I think a lot of conservatives are breaking away from the Republicans, because conservatives as I understood them are very interested in sacred texts — the Bible, the Constitution. These things are locked down.

Q: Many conservatives you met seemed united by their obsession with gays.

A: That continues to elude me. That's the one great mystery in the book that I really tried to figure out. I talked to this girl at the College Republican convention who said she used to shop at Target but she doesn't anymore because they give money to the United Way, which supports groups that are for "The Gay." And so throughout the book I refer to "The Gay." It's just an interesting bit of phraseology because it turns 10 percent of the population into an anthropological curiosity. I still don't get what is so scary about gay people. It could be because I was an actor for many years.

Q: You found the most Bush-friendly town also to be the friendliest?

A: In this little town, Rexburg, Idaho, which had voted for Bush at 92 percent — the highest rate I could find anywhere in the country — people were just so nice.

So then I thought, what are some of the more friendly towns I've been in? And they were like rural Montana, rural Arizona, these really small places that are really conservative places. OK, where have people been the biggest jerks to me? Seattle, San Francisco, Portland, Los Angeles, safely blue state kind of regions. So it was a little dissonant. Also everyone has seven babies in Rexburg, Idaho.

Q: So you walk a mile in another man's Top-Siders and discover that we're really all the same underneath and the only thing that matters is that you're a good person ... uh, right?

A: This is brought to you by the Hallmark Channel. What I discovered is that things are just a lot more complex than people make them out to be.

A: Yeah, that's the other thing, the difference between simplicity and complexity. But it's a really powerful thing to just shut up and listen to somebody who has ideas that are different than your own. 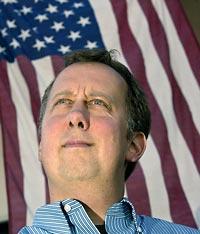 "What I discovered is that things are just a lot more complex than people make them out to be," said John Moe, author of "Conservative Me: How I Tried to Become a Righty with the Help of Richard Nixon, Sean Hannity, Toby Keith and Beef Jerky." (DEAN RUTZ / THE SEATTLE TIMES)