ON THE BERING SEA — If the research vessel Thomas G. Thompson were the set of a reality show, the seal guys might have been voted off first.

Not that they weren't delightful company.

But they wanted the ship to stay near the Russian border, where the ice was thick and the seals abundant.

The oceanographers and plankton biologists were grumpy because bad weather had driven them out of the areas they were most interested in. Now that conditions had improved, they argued the ship should head south and try again.

It was a power struggle of the most genteel sort.

"I'm already hurting," said oceanographer Edward Cokelet, explaining that there wasn't enough time to return to the spot that would yield the best data on ocean conditions. To reach even the second-best location, the ship needed to turn back soon.

"I feel your pain," deadpanned John Bengtson, leader of the seal contingent.

Laughter filled the ship's library, where the 20-person science team was gathered to hash out the schedule for the remainder of their spring voyage to the Bering Sea.

The mediator's job fell to chief scientist Nancy Kachel, a National Oceanic and Atmospheric Administration oceanographer based in Seattle.

"Everybody wants something they can publish," she said, summing up the challenge for the expedition to study the impact of climate change and shrinking ice cover on the nation's most productive fishing grounds.

Every research cruise is a balancing act. The five-week trip this spring required extra juggling because so many different specialties were represented. Scientists studying water chemistry and microscopic plants and animals were vying for ship time with those looking for fish, counting birds and tagging seals.

At the end of the 90-minute negotiation — complete with whispered conferences among the factions — most seemed satisfied with the compromise: Two more days of seal hunting; an overnight run back to the oceanographers' southern stations; a couple of quick crab larvae trawls; and bird observations sandwiched in between. That left about four days of nonstop sailing to reach Seward, the journey's end, by May 12.

"You try to keep everyone happy," Kachel said, shaking her head.

Scientists who work at sea size up ships the way gourmets rate restaurants.

The Thompson, a University of Washington ship, gets high marks as one of the most "sea-kindly" vessels in the research fleet.

As it was, the Thompson bucked so hard during bad weather that seasickness remedies were a popular topic of conversation.

In the old days, folks used to stock up on a two-capsule combination called a Coast Guard cocktail. But too many sailors took the upper and skipped the downer, and now it's hard to come by.

Scientists who boarded the Thomas during a stop at St. Paul Island midway through the cruise got a chance to let their stomachs settle and stow their gear before mustering in the main lab for the mandatory safety briefing.

The highlight was the Gumby suit drill.

Made from Neoprene, these fluorescent-orange survival garments cover every inch of skin, except a small window over the eyes. To put one on, you lie flat on the deck and tug the bulky one-piece up over your clothes, shoes and all. The arms end in oversized mittens. The feet flop like flippers.

If an alarm sounded, said chief mate Robert Symonds, everyone was supposed dash to their cabins, grab their Gumby suits and meet in the lab.

Someone asked how long the outfit would keep a person alive in the 35-degree water.

Symonds thought for a moment.

"We'll, you're going to swallow a lot of sea water," he said. "I think that'll get you first."

The Gumby suits are only for the worst-case scenario: Abandoning ship.

For working on deck or on the ice, the scientists don Mustang suits. The insulated nylon coveralls block wind that slices through ordinary outerwear. If you fall through the ice, the buoyancy keeps you afloat. White, waterproof "bunny boots" and insulated rubber gloves complete the ensemble.

Even with the foul-weather gear, time spent outside was a misery for most of the trip. Ice rimed the bow like glaze on a cake. Early in the trip, the wind-chill factor dipped to minus 25. Instruments pulled from the water froze before the winch could set them down.

"Darned unpleasant, even by Bering Sea standards," conceded University of Washington ecologist George Hunt, who has worked in the area for more than 25 years.

Seattle has always been a seafaring town. Though jets and software long ago supplanted fishing and shipping as the region's economic engine, more than 43,000 Washingtonians still make a living on boats, from tug operators to Navy ensigns and trawler deckhands.

Six research ships and three Coast Guard ice breakers are based in Seattle. Collectively, they spend about 2,000 days at sea each year.

For those on shore, it sounds romantic.

But shipboard science is more like an assembly line than a Jacques Cousteau documentary.

A research vessel like the Thompson costs $30,000 a day to operate, so scientists work in shifts around the clock to maximize their time.

Much of what they do is repetitive.

The workhorse tool of the Thompson's spring cruise — and virtually every oceanographic expedition — is an instrument called the CTD.

The rosette of 4-foot-tall cylinders samples the water and measures temperature and salinity at different depths. During the spring trip, scientists lowered and raised the CTD 122 times, collecting more than 2,000 samples.

Other stalwarts were "bongos" and Tucker trawls — nets towed alongside the ship to capture plankton, fish larvae and tiny crustaceans.

With their roaring Zodiacs and mad dashes across the ice to net seals, the marine-mammal biologists were the rock stars of the voyage. But even their exploits were bracketed by the time-consuming routines of lowering and raising the inflatables, checking batteries and tinkering with outboards.

The ship's utilitarian furnishings are geared for work, not relaxation.

Vinyl couches and chairs look like rejects from an Army surplus store. Spartan, two-person cabins, with narrow, metal bunks don't invite lounging. In the communal heads, the sole decorative touch was a rope strung with toilet-paper rolls, like beads on a necklace.

Those who spend the most time onboard create their own environments.

NOAA oceanographer Calvin Mordy called the Thompson home for 10 weeks this year, split between the South and North Pacific Oceans. His work, analyzing nutrients in the water, kept him stuck in his lab near the ship's stern. So he outfitted the space with a stereo — often blaring Pink Floyd — a television to play videos and comfy chairs to entice visitors.

The one thing that brings everyone together is food.

"The galley is the heart and soul of the ship," said Shawn Strange, one of two cooks.

Strange and head steward Dan McBriar served up to three meals a day on a clockwork schedule for the ship's 20 scientists and 22 crew members. Crab legs, T-bone steaks, grilled mahi-mahi, tacos, lasagna — every dinner offered at least two entrees, with a salad bar, homemade soups and assorted side dishes. Leftovers were stored in the fridge for snacking. Tubs of candy bars and cookies were topped off regularly.

The only thing missing from the menu was booze. Like most research vessels, the Thompson is a dry ship.

A crew full of characters

On the midnight-to-4 a.m. shift, occasional moonlight and the green glow of instrument panels provided the only illumination on the bridge.

The Whidbey Island man first went to sea as a teenager, and used to sail oil tankers between Alaska and San Francisco. "It was mind-numbing," he said. He took a 30 percent pay cut for a job on the Thompson.

He likes the variety and the way scientists push things — asking for one more run before the ice closes in, one more hour to chase seals.

He also likes to pace and throw out random comments.

"Did you know Michael Nesmith's mother invented Wite-Out?" he asked during one shift. "The guy from the Monkees."

Simultaneously contemplating an ice-free stretch of water and Superman's Arctic lair led him to wonder: "Will global warming melt the Fortress of Solitude?"

At 274 feet, the Thompson is like a small city. It has six diesel electric motors, a desalination plant for drinking water and rudimentary sewage-treatment capacity. It carries 260,000 gallons of fuel and burns 3,600 gallons a day going full speed.

On this trip, the ship's master was Capt. Phil Smith. An affable but exacting veteran of the marine-salvage industry and Alaska's ferry system, Smith was the final authority over scientists and crew members alike.

He fills in when the ship's full-time captain is off. Others, like Strange, the cook, prefer to hop between ships, working a few months straight, then savoring a block of free time.

Haroldson is more of a regular, spending about seven months a year on the Thompson.

Working long stints with no time off can seem grueling to those not disposed to the seafaring life, said Linda Mancuso, able-bodied seaman. (The designation dates to the 18th-century British Royal Navy and denotes an experienced hand able to do everything from stand watch at the helm to swab floors.)

"You have to have a high tolerance for other people," she said. "You're never more than 273 feet away from everyone you work with."

Even so, some crew members rarely surface — particularly the engineers who prowl the ship's bowels.

Jan Gawel spends much of his time in the machine shop, where the walls are covered with drill bits, sockets and wrenches the size of small children. He honed his fix-it skills working on Polish and Russian fishing boats, using bicycle tubes to lash broken pipes together so not a moment of valuable money-making time was lost.

In his three years on the Thompson, he's learned to read the ship's rhythms. "Noise is a good thing," he said. "You wake up when it's quiet."

The Thompson's eclectic scientific missions keep life interesting, and the university's willingness to spend on maintenance makes the engineer's job much easier, Gawel said, the day before the Thompson pulled into Seward.

For the scientists, the Alaskan port was the end of the journey. They packed up their gear and flew back to Seattle. For Gawel and the rest of the crew, it would be more than a month before homecoming.

Another group of scientists came aboard in Seward for a survey in the Gulf of Alaska. After returning to Seattle, the ship was scheduled to work the Pacific coast and the Strait of Juan de Fuca until later this month.

The long separations are hard on relationships, but Gawel has been married for 28 years. "To the same woman," he points out.

He likes to travel. She doesn't.

On drifting ice in the Bering Sea, oceanographer Edward Cokelet tests the thickness and stability of the ice before bringing his crew out to collect data. (STEVE RINGMAN / THE SEATTLE TIMES) 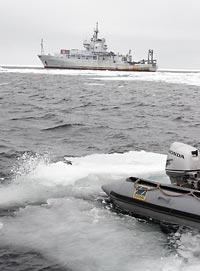 Though not an icebreaker, the Thomas G. Thompson can sail &#8212; slowly &#8212; though floes up to 2 feet thick. However, its propulsion system is vulnerable to ice-chunk damage. (STEVE RINGMAN / THE SEATTLE TIMES)

The sun sets amid a wash of brilliant color near the edge of the Bering Sea ice floes. The 274-foot Thompson encountered few other ships during its research trip. (STEVE RINGMAN / THE SEATTLE TIMES)

In the galley, cook Shawn Strange loads a pan of lasagna into the oven while steward Dan McBriar prepares a cake. The Thompson's filling menus included two entrees at dinner, salads and plenty of snacks. (STEVE RINGMAN / THE SEATTLE TIMES)

Oceanographer Colleen Harpold, right, steadies a line as a winch lifts the CTD (conductivity, temperature, depth) &#8212; the instrument used over and over to collect water data. During the trip, the CTD collected more than 2,000 samples. (STEVE RINGMAN / THE SEATTLE TIMES)