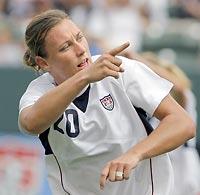 Wambach collects three goals, three assists: Abby Wambach had three goals and three assists to lead the U.S. women's team to a 10-0 rout of Taiwan in an exhibition match Sunday before 5,479 in Carson, Calif.

Wambach has 62 goals in international play, ranking sixth on the U.S. career list.

Goalkeeper Briana Scurry of the United States (12-0-3) did not need to make a save. Taiwan was outshot 23-0.

Manchester United and two-time defending champion Chelsea each have 16 points, but Man U leads the league based on goal difference.

Blake, seeded third, has won four ATP Tour tournaments this year and seven in his career.

Garrett Gomez rode the Saeed bin Suroor-trained colt, who ran a mile in 1:36-2/5 on a main track rated good.

Devils trade Malakhov: New Jersey made a major move to get under the league salary cap by sending suspended defenseman Vladimir Malakhov — who has a $3.6 million salary — and a conditional first-round draft pick to the San Jose Sharks for defenseman Jim Fahey and the rights to left wing Alexander Korolyuk.

Researchers developing test: Anti-doping laboratories are working on a test to detect protease, a powder some contend is being used to destroy traces of performance-enhancing EPO in urine samples.