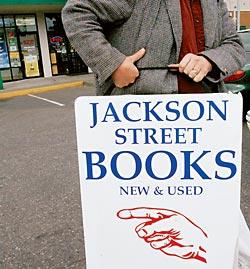 Six days a week, and sometimes seven, about 10:30 a.m., Dan Domike schleps his sandwich board out to the curb on South Jackson Street, pointing the way to his small shop. (ALAN BERNER / THE SEATTLE TIMES)
By Tyrone Beason

"Why do people go into bookselling? It's not for the money, or the glamour, or a secure future. The answer is simple: love. You love books so much that you believe a book, any book, is an important object, nearly sacred."

SURE, IT WOULD be nice if business was booming at Jackson Street Books, the tiny bookshop Dan Domike and his wife, Tammy Domike, opened with their own savings in 2004.

The shop, practically hidden around a corner at the Promenade 23 Shopping Center on 23rd Avenue South and South Jackson Street, is the kind of nondescript storefront you wouldn't notice unless you were looking for it.

And you really do have to search it out at this awkwardly designed strip mall, where Army and Navy recruiting offices vie for attention with a Red Apple market, a Rent-A-Center furniture store and a Taco del Mar.

On one particularly quiet morning, Dan sits alone at the check-out counter and explains the main challenge of operating the bookstore, a fact that seemed obvious: There's very little foot traffic. That means slow sales on many days. And that doesn't add up to much of a living, Domike admits.

But in two years, Domike and his wife, who also manages the popular Seattle Mystery Bookshop in the heart of downtown, have achieved a different type of success, even as the Internet and chain retailers threaten the very idea of a locally owned, bricks-and-mortar bookstore. They are survivors in an industry undergoing monumental change, in a neighborhood grappling with its own growing pains.

The store draws in loyal customers by meshing well with the surrounding racially and economically mixed Central District neighborhood, where the Domikes live with their 17-year-old son, Tony.

At Jackson Street Books, fliers promoting African-American cultural events line the windows, and a shelf of black literary titles sits next to a shelf of general-interest best-sellers.

"When we first moved here, we were one of the few white couples," Dan Domike says. Locals took notice when a bookstore opened — at last — in their district. "Probably my best-selling line of books is African-American books," Domike points out.

Still, owning a bookstore, or any kind of store, can be a struggle at an inner-city crossroads that has only recently hit its stride. The Domikes have learned to keep their expectations in step with certain external realities.

It took years of neighborhood activism to lure a supermarket to 23rd and Jackson in the 1970s, when the Central District was home to virtually all of Seattle's black households. The first Starbucks in the area, across the street from the bookstore, arrived in the late-1990s only after the Seattle coffee company had firmly established itself in the city's predominantly white neighborhoods. The perception, up until recently, was that 23rd and Jackson was a place to avoid, not a place to hang out and shop.

Gentrification did come, but its effects have been uneven. Tammy Domike says many residential intersections now boast traffic circles to slow speeding vehicles, an amenity neighborhood old-timers had unsuccessfully campaigned for in previous years.

But when asked to identify any other general-purpose bookstores operating in the vicinity, both Dan and Tammy Domike come up empty.

THE ODDS OF financial success are stacked against the Domikes, but Jackson Street Books is more than a business gamble for them. It is a way of being good neighbors in a district where cultural tensions often simmer just beneath the surface. More important, the store is the Domikes' way of expressing their idealism about the act of selling books, something both have done in one setting or another for most of their adult lives.

"I don't know how to do anything else," Dan Domike says. In 1975 at the age of 26, he opened his first bookstore in Seattle's Montlake neighborhood after moving here from Portland. Poor foot traffic plagued that location, as well, and he stayed open just four years.

After a series of jobs in the local book industry, including one in the early 1980s at which he met his wife-to-be, Domike decided to give it another chance.

"We could have done this online," he explains, noting that he supplements store sales by selling part of his inventory on Abebooks.com. "But I like seeing people. I like dealing with people. I like talking to people and having people talk to me."

Will Peters, president of the Pacific Northwest Booksellers Association, says times have gotten hard for bricks-and-mortar chains as well, as online buying and used-book sales cut into in-store revenues across the board. But small, independent bookstores, especially those operating on slim profit margins, are even more at risk.

"A lot of bookstores have gone away, but the ones who have survived have done a lot to adapt," says Peters, who runs Annie Bloom's Books in Portland. "The best ways are really knowing who your customers are and what they want."

He is confident that if a book gets hot and runs out, his store can get it more quickly than a bigger bookstore could because larger chains may batch orders or work through a main warehouse, which may add to delivery times.

The Domikes also work at getting to know their customers and making them feel like neighbors. With its purple couch, chairs and coffee table, their bookstore is like an extension of some bookworm's living room. Dan's zebra finch, named Gertrude, occasionally chirps in its cage next to the couch.

On Wednesday nights at the store, Tammy, who grew up on a farm in Pierce County, hosts a "Stitch-'n-Bitch" knitting session, where neighborhood denizens spend two hours doing more or less what the expression implies.

"Some weeks we don't get anyone in," Tammy says. "Some folks come for weeks on end, and then we don't see them again."

Elaina Buzzell, a 25-year-old who moved to Seattle this past summer and lives on Beacon Hill, says the event reminded her of a similar bookstore knitting session in her hometown of Iowa City. She was using her first visit to the Seattle event to finish a scarf she planned to give as a Christmas gift.

But before Buzzell's bitching could begin, longtime resident Nina Harding ambled in and immediately stole the show. Harding, who claims to be "almost 70," declares that she's lived in the Central District since 1960 and wouldn't leave "for all the tea in China." She was one of the Domikes' first customers and a founding member of the knitting group. She's also a member of the store's frequent book-buyer program — Dan orders books with large print for her weakened vision — and she's been active in campaigns to revitalize 23rd and Jackson with just this type of small business.

She praises Tammy for providing yarn and needles to members of the group who need them.

Having a neighborhood bookstore to visit, and a new place to shoot the breeze, clearly excites Harding. "It's very important for black folks to read and to have a bookstore," she says. "One thing Dan is kind enough to do is to make sure there is an eclectic mix of books. It's good exposure for our African-American youth."

African-American romance writer Edwina Martin-Arnold, of Seattle, appeared at the store in July to read from her novel "House Guest" (Harlequin, $5.99 paperback). Big-name authors such as Walter Mosley have also given readings at the store, raising its profile among Seattle's independent booksellers.

Word-of-mouth plays a huge role in what the Domikes stock. Unlike large retailers, small local stores can't afford to stock dozens of copies of a new hardcover only to have the book fail in terms of sales. The Domikes have to be good at predicting exactly what their customers will buy.

Khaled Hosseini's 2003 debut novel set in Afghanistan, "The Kite Runner" (Riverhead), for example, has been popular in paperback form, helped along by praise in book clubs.

THE ELEMENTS for longevity seem to be in place at Jackson Street Books.

Longtime customers have come to think of the store, and Dan Domike, as fixtures in the neighborhood.

"African-Americans, Asians, white people — everybody gravitates to his bookstore," says one of Domike's regulars, Bobby Fleeks, a publisher and president/chief executive of Write Professionals: Creating words that sell. "It's a resource that the community hasn't had."

"You can go up there and find almost anything, and if he doesn't have it he can find it."

But it all comes down to dollars and cents, and patience.

The first shelf people see when entering the store is one devoted to books of essays, histories, novels and statistics about Domike's favorite sport, baseball, which isn't what many customers come looking for, Domike acknowledges.

"One of these days," he says with knowing over-optimism.

Balancing personal ideals and bottom-line interests can be a tricky thing.

"When I get someone to knit, that look of just absolute joy, of 'I did that!' is just amazing," Tammy says. "Or if you get a reluctant customer to read a book and they like it, it's so cool."

"We hoped the business would be at a higher level," she says a bit obtusely. Asked to be more specific, she blurts, "More money!"

"But we'll stick it out," she says. "We knew that might not happen quickly."

"We're still struggling. But the passion is still there."

Tyrone Beason is a Seattle Times staff writer. He can be reached at 206-464-2251 or tbeason@seattletimes.com. Alan Berner is a Times staff photographer. 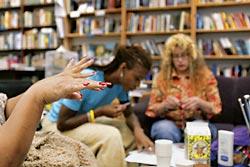 At the Wednesday-night Stitch-'N-Bitch, Merica Whitehall (in blue) learns to knit from Tammy Domike, wife of Dan Domike. (ALAN BERNER / THE SEATTLE TIMES) 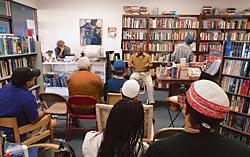 It doesn't take many to fill up the bookstore during a talk by author Babalawo Oloye Ifa Karade. Owner Dan Domike, at his familiar spot behind the counter by the door, has drawn attention from other independents by bringing in high-profile writers such as Walter Mosley. (ALAN BERNER / THE SEATTLE TIMES)

Nelson Mandela, bottom left, peers out from Jackson Street Books in the Promenade 23 Shopping Center at 23rd Avenue South and South Jackson Street. He's on a bag Domike picked up at a conference. Originally, Domike, 55, and wife Tammy, 47, were one of the few white couples in the neighborhood. They've gained acceptance in the community by creating a store that appeals to all races. (ALAN BERNER / THE SEATTLE TIMES) 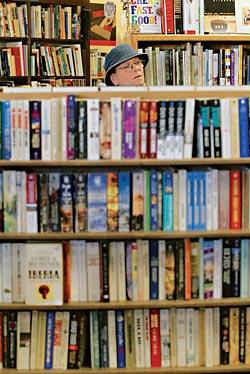 While he doesn't have crowds of customers, Dan Domike estimates he has between 12,000 and 14,000 books in his store. (ALAN BERNER / THE SEATTLE TIMES)