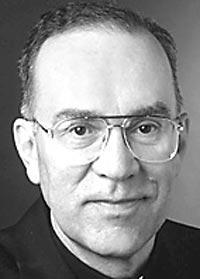 The president of Seattle University said Thursday he has no doubt that a Jesuit priest who taught at the school from about 1950 to 1976 sexually molested young boys.

But the Rev. Stephen Sundborg also said he believed that Seattle University bears no legal responsibility for the actions of Michael Toulouse, because any acts of sexual abuse he carried out occurred outside the scope of his official duties as a teacher at the school.

"This was a professor at Seattle University. We know now that this person abused minors. That's a very hurtful thing," Sundborg said. "As the president of this university, I feel an obligation to acknowledge that." Sundborg said the first he heard of such allegations was in 1993.

At the same time, he said, such allegations do not involve "sexual abuse in his functions as a teacher at Seattle University."

A lawsuit making its way through federal court in Seattle accuses Toulouse of molesting a 12-year-old boy in the Jesuit residence at Seattle University in 1968. Toulouse died in 1976.

Mike Pfau, one of the plaintiffs' lawyers, disagreed with Sundborg's position. "We are seriously considering suing Seattle University in the next round of Toulouse cases," Pfau said. Toulouse was "a faculty member who was molesting children and molesting children on campus. To the extent they knew this was going on, it's a strong argument that they're liable."

The lawsuit seeks damages from the Society of Jesus, Oregon Province, which has about 250 Jesuit priests and brothers in five Western states including Washington. Seattle University is not a defendant in the suit, and Sundborg, in response to questions from The Seattle Times, said he believes the university bears no legal liability.

Documents recently filed in the court case claim that at least a dozen victims of Toulouse have been identified. They also show that Toulouse was allowed to continue teaching even though Jesuit leaders — including some at Seattle University — repeatedly raised concerns.

One of the earliest allegations against Toulouse came in Spokane around 1950 when the father of one victim threatened to shoot Toulouse. Shortly after, priests told the victim's father that Toulouse, who had been a teacher at Gonzaga High School, had been sent to Seattle University, court documents say.

Pfau, the plaintiffs' lawyer, said that after Toulouse came to Seattle, he helped out at various parishes and ingratiated himself with families, abusing some of their children.

In one family, he had sex with the oldest son for several years, then moved on to the next-oldest son, then to the third son, plaintiffs' attorneys said in one filing.

After the parents finally learned of the abuse in 1965, the province apparently ordered Toulouse to have no contact with the victims, but continued to allow Toulouse to work with young boys, court documents say.

In 1967, Toulouse abused the young son of a widow, according to court filings. Both the boy's mother and a Jesuit priest wrote letters in 1968 to the province requesting action against Toulouse, but the province hasn't produced the letters.

The court documents further claim that:

The province then apparently promised the boy a scholarship, but years later, when he wrote the province in 1993 and sought compensation in the form of scholarships for his own children, Sundborg, who was then Oregon provincial, wrote back that "there is nothing about this matter in the provincial files, in the personnel files of Fr. Toulouse, or in the files of Seattle University."

In Thursday's interview, Sundborg said the scholarship request struck him as odd, but he checked into it. While a priest did confirm a 1968 conversation with the victim's mother about Toulouse's abuse, he said, people's recollections were vague.

Then around 1968, Toulouse is said to have taken a 12-year-old boy to the Jesuit residence at the school and molested him — the subject of the current lawsuit.

Sundborg said that while the Jesuit residence is on Seattle University's campus, what happens there falls under the authority of the province, not the school.

Sundborg also said he couldn't talk about other documents that questioned Toulouse's behavior over the years.

Minutes from a 1938 meeting of province leaders questioned Toulouse's obedience and lack of religious discipline.

In the 1950s, minutes from a meeting of province leaders say that Toulouse "permitted a school boy to attempt intimacies" with him.

And Seattle University's president repeatedly wrote to the provincial saying Toulouse was a source of worry.