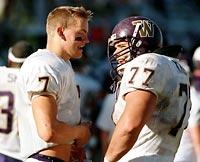 "If I could have picked any of those guys to come back and play with me my last year, it wouldn't even be a second thought," Brock Huard, left, says of former Huskies teammate Olin Kreutz. (MARK HARRISON / THE SEATTLE TIMES, 1997)
By Danny O'Neil
Seattle Times staff reporter

Brock Huard had told Olin Kreutz his mother was pretty.

There was no wink that went along with that comment. No raised eyebrow. No sort of insinuation at all.

"No reference in any way other than his mom was very young and pretty," Huard said. "And he snapped."

And that sent Huard running from an offensive lineman whose job was usually to protect the quarterback. Kreutz chased Huard out of the cafeteria of McMahon Hall on the University of Washington campus.

Kreutz is now the man in the middle of Chicago's offensive line, a center in his ninth season in the NFL who has been named to the Pro Bowl five times. His job requires a little nastiness and a whole lot of toughness, and Kreutz plays it with an edge that has cut both ways.

Twice he has broken a teammate's jaw in a fight. Sports Illustrated named him one of the 10 most feared players in the NFL earlier this season. His response?

"I thought it was a pile of crap," Kreutz said in a telephone interview this week.

"Olin is one of my favorite people on the team," Chicago linebacker Brian Urlacher said. "No. 1 thing, I'm glad he's on my team because I wouldn't want to play against him."

Sekou Wiggs can't help but chuckle a little when he gets the phone call.

Wiggs has earned his degree from Washington and works as a real-estate broker for John L. Scott, but he remains linked to Kreutz by one punch that was thrown more than a decade ago. A confrontation that began on the field carried over into the locker room, and Wiggs was left with a badly broken jaw.

He said he would take it back if he could.

"I feel, honestly, that Olin truly, truly didn't mean for that to happen," Wiggs said. "I think he truly feels in his heart, some regret."

Wiggs has become a reference point in Kreutz's history. He was called by a reporter from Chicago last year after Kreutz punched Bears teammate Fred Miller in an off-field incident. Miller suffered a broken jaw, and though he apologized for provoking the incident, it led some people to revisit what happened between Kreutz and Wiggs back in 1996.

It was spring practice. Wiggs was a defensive tackle who started six games as a sophomore. Kreutz was coming off his freshman season. They skirmished at practice. The conflict flared up again in the locker room, and Kreutz punched Wiggs, breaking his jaw so badly it had to be wired shut for more than a month.

Kreutz was kicked off the team for the rest of the spring and reinstated only after he attended anger-management classes.

Wiggs couldn't eat anything solid for more than a month and lost more than 40 pounds. He missed the first three games of the next season, but even when he returned he was 25 pounds lighter than he had been. The trajectory of his career was forever altered.

"If this wouldn't have happened I'm pretty sure I would have went pro," Wiggs said. "A big setback obviously ... I would have had a very successful career like Olin is having."

Don't read bitterness into those words. Wiggs is not playing football, but he has found success. He has also demonstrated acceptance where others may have exercised anger.

"That did put me on another path," Wiggs said. "It was an opportunity to go out and do something else. Early on, it was a little tough."

Wiggs and Kreutz have agreed to keep between themselves the details of exactly what happened, and Wiggs sees it as something unfortunate that happened between two competitive people.

"We were both very similar in a lot of aspects," Wiggs said. "He's a tough guy, and that's his style and his personality. I'm that as well. It was like two bulls."

Steve Morton was in Hawaii to see a high-school recruit.

It was the sound of the weight-lifting apparatus in the outdoor gym of Kreutz's grandfather. It was housed in a large carport with a simple placard out front, which was yellow like a traffic sign with black letters bluntly instructing people to keep the gym clean.

Kreutz's father is a longshoreman, his mother a teacher and it's his grandfather's gym that was the reason Kreutz arrived at Washington able to bench press 450 pounds and prepared to play as a true freshman. He appeared in all but one game in 1995, playing guard.

He left Washington after finishing his junior year in 1997. He was one of 10 players drafted into the NFL from UW in 1998.

"Without a doubt, he was the biggest loss," Huard said. "If I could have picked any of those guys to come back and play with me my last year, it wouldn't even be a second thought."

"He's one of the best leaders I've been around at any level," Smith said.

The kind of guy who comes in on his days off to lift weights, and a veteran the younger players turn to when they need an example. 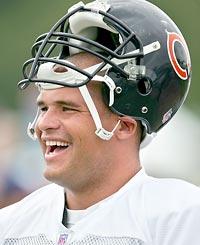 One of 10 Huskies drafted into the NFL in 1998, Olin Kreutz is the Chicago Bears' starting center. Twice he has broken another player's jaw in a fight. (JONATHAN DANIEL / GETTY IMAGES)