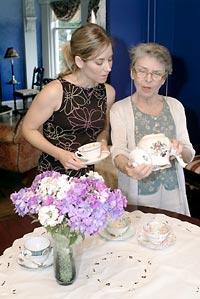 The yearning for family in an atomized society of scattered, estranged blood relations is a recurring theme in modern American literature.

A popular recent novel in this vein, "Broken for You" by Seattle author Stephanie Kallos, imagines a disparate group of strangers forging strong familial bonds in a big city like this one.

That such a tribe would be a bastion of unconditional mutual love and support is what makes Book-It Repertory Theatre's new stage version of "Broken for You," ultimately, an upbeat tear-jerker. And thanks largely to a well-cast, compelling crew of actors making the most of Kallos' dry wit and choice local references, the show can almost get you believing in the possibility of an instant, idyllic clan.

Almost ... until the illusion starts to crack under too many "Oprah"-lit clichés. And the more complex reality of "repairing the world" and forming new attachments to replace the old is overtaken by the saccharine fairy-tale vision.

Whether this lack of credulity stems from the novel itself, or Laura Ferri's rambling adaptation of it, is not entirely clear. But evoking coincidences and convergences over many pages may not have the same contrived effect as jamming many of them into an overloaded three-act play.

The main catalyst in "Broken for You" is Margaret Hughes (played with wry humor and grace by Anne Ludlum). A wealthy elder woman who lives in an antiques-crammed Capitol Hill mansion, Margaret is diagnosed with a fatal brain tumor.

She takes the news as a wake-up call to radically change her life. After years alone, Margaret takes in a colorful crew of boarders starting with Wanda (the vivid Jennifer Sue Johnson), a wounded, angry young woman clinging to a failed romance.

Margaret also takes a lover, met by happenstance, the doting Scotsman Gus (Sean G. Griffin). And she faces the massive guilt related to a terrible legacy: her inheritance of many coveted objets d'art purloined from European Jews during World War II.

For the first act, Ferri's adaptation and her cogent direction of the excellent cast make "Broken for You" an engrossing puzzle.

Some of Margaret's prized pieces of fine china and ceramic figurines chime in as a Greek chorus of voices and opinions. Shards of Margaret's childhood, with an attentive father (also played by Griffin) and unstable mother (Emily Grogan) poke sharply into her present reality.

Wanda also has a painful past of severed ties. And, in a parallel story line, so does Michael O'Casey (Russell Hodgkinson), a Yeats-spouting bowling-alley attendant, enlisted as a surrogate son by an older Jewish woman, Irma (Stephanie Hilbert).

People die and suffer in this story. They harbor old wounds. But as the play winds on (and on), so does a vision of an alternate family of near-saintly patience, commitment and generosity. And as life's cracks are mended, just about everyone gets what they want — a good death, a good love (like Colin Byrne's Troy), reconciliation, artistic success, even a baby (for a sweet, sexless gay roomie played by Bill Johns, carried by Lisa Viertel's housemate/hospice nurse).

If Ferri's script had streamlined the novel more, perhaps the heart-tugging triumphs would not pile on so thickly and (by the end) so incredulously.

As is, "Broken for You" may get you rummaging for a Kleenex. Fairy tales can do that, especially if you want to believe in what's too good to be true.