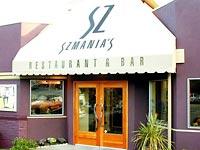 Szmania's Restaurant & Bar is a neighborhood bistro for the Magnolia area. (COURTESY OF SZMANIA'S)
By Providence Cicero
Special to The Seattle Times

At the end of the '80s, Ludger Szmania was a high-profile chef at the (then) Four Seasons Olympic Hotel downtown, but he and his wife, Julie, made their home in Magnolia. As they pushed the first of their three sons in a stroller through the wide streets of that quiet village, they would fantasize about opening a restaurant within walking distance of their home. On Sept. 19, 1990, they did.

Like their firstborn, now a 6-foot-4 senior in high school who buses tables at the restaurant, Szmania's has not only grown over the years, it's matured. As the restaurant enters its 17th year, it has never seemed fresher or more vital. It operates with a high level of efficiency and expertise both in the kitchen and out front, uncommon in a neighborhood bistro.

Most any night or day, Szmania's art- and flower-bedecked dining room and lounge are peopled with young and old, solo or in celebratory groups, wearing everything from suits to sweats, suggesting that this village bistro is something of a second home for many Magnolians.

They congregate at the small bar, where enormous martinis and cocktails, like the darkly complex Hemingway, made with rum, lime juice and maraschino liqueur, are mixed.

Most eat in the L-shaped dining room, but a coterie of regulars prefers the counter, where they can kibbitz with their neighbor, the chef.

To accommodate them, Szmania has built flexibility into a contemporary American menu that's influenced by his German upbringing and European training.

Lunch combos, smaller-sized portion options and a three-course early-dinner menu for $19.95 are among the value-added features designed to appeal to the local demographic. Little ones aren't overlooked either — where else will you find a kids menu ($3-$9) listing schnitzel, grilled salmon and crab cake with cilantro aioli together with the more typical grilled-cheese sandwich and buttered noodles.

Grown-ups may eat as lightly or as lustily as their mood dictates and their wallet allows. Start with something extravagantly rich: chowder loaded with crabmeat, finely diced potatoes and corn kernels, perhaps; or carefully seared twin weathervane scallops, stately as yachts in a sea of shiitake mushrooms and sublime Madeira sauce.

Among the "Great Sharables" are a quartet of smoked salmon bruschetta and an "Alsatian cheese tart." The latter is actually a dreamy pillow of puff pastry cupping a savory melt of Muenster cheese embedded with caramelized onion and bacon bits. Bruschetta bombards the taste buds with supple, delicately smoked curls of fish entwined with roasted yellow pepper, capers and goat cheese.

These preludes complement bountiful main courses like Julie's Special, which features the fish du jour, and, what really ought to be called Ludger's Special, Szmania's outstanding jagerschnitzel. Those sprawling pork cutlets, pounded thin, breaded and fried, are still notably crisp beneath a heavy mushroom gravy.

Cheese spaetzle on the side ratchets up the comfort-food quotient to delirious heights.

In contrast, Julie's Special might be considered spa cuisine. Herb-roasted halibut was the daily catch, bedded with sautéed prawns and scallops on bright-green spinach, mushrooms and seasonal vegetables. The brothlike nage pooled on the plate distills the essence of each along with garlic and white wine.

Roasted halibut proves just as alluring with a pale pink sauce Americaine draped like pashmina over its jacket of pungent fresh herbs. Lobster-mashed potatoes echo the lobster-enriched sauce, and like most entrees here, the plate includes a riot of sautéed seasonal vegetables.

Lunch could be a bratwurst, a burger or a lovely almond-crusted organic chicken breast. It could also be an entree from the dinner menu, scaled down in size and price, like Julie's Special and pappardelle, a satisfying tangle of fresh pasta, roasted tomato, sliced onion and slender asparagus simply adorned with olive oil, basil and asiago cheese.

If you sit at the counter near the dessert station, it's impossible not to be tempted by sizzling pans of peach tartetatin being flipped onto plates, fruit side up and topped with vanilla ice cream. Alas, the pastry on ours fell flat, though the peaches were beautifully caramelized. Strawberry shortcake, made with pound cake, proved too dense and heavy, as did all three flavors of crème brulée.

But the occasional misstep — a sauce that lacks finesse, duck that's a little tough, desserts that look better than they taste — doesn't much matter in the long run. The sheer vitality of this restaurant is thrilling. The confidence exuded by the waitstaff, the concentration exhibited by the cooks and the obvious enthusiasm of the customers are proof that Szmania's is a restaurant at the top of its game. 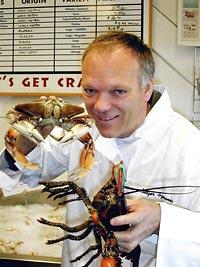 Szmania's art- and flower-bedecked lounge and L-shaped dining room are welcoming sights for many Magnolians. (COURTESY OF SZMANIA'S)

Parking: In adjacent lot or on street.

Who should go: 98199 residents and everyone in the neighboring ZIP codes.

Credit cards: All major ones accepted.