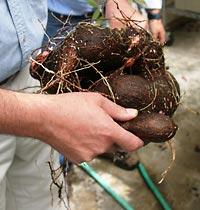 Hoping to reduce hunger and poverty by sparking a "green revolution" in Africa, the Bill & Melinda Gates Foundation on Tuesday announced a new partnership with the Rockefeller Foundation to dramatically increase productivity of small farms in the poorest region of the world.

This is the Seattle-based foundation's first major push into agriculture, one of several new areas it has targeted for investment as it ramps up to spend $3 billion annually.

"We hope to help millions of the most vulnerable people in Africa lift themselves out of poverty," Melinda Gates said in a telephone news conference.

The partnership, the Alliance for a Green Revolution in Africa (AGRA), will initially invest $150 million to improve seed technology and produce higher yields in sub-Saharan Africa. The Gates Foundation will contribute $100 million and the New York-based Rockefeller Foundation $50 million.

The project faces a challenge to succeed in a region characterized by harsh and highly varied conditions, while avoiding pitfalls of earlier efforts that poisoned some ecosystems with fertilizers and pesticides and drained rivers and wetlands for irrigation.

The effort builds on work the Rockefeller Foundation began in the 1940s that created the first so-called Green Revolution, boosting the output of farms in Latin America and Asia and relieving widespread famine. That effort moved many of the world's poorest countries and people out of extreme poverty.

But the effort largely bypassed Africa. Over the past 15 years, the number of Africans living on less than a dollar a day has grown to exceed the population of the United States. If the trend continues, sub-Saharan Africa will be the only place in the world where the number of poor people will be higher in 2015 than it was in 1990.

"No major region around the world has been able to make sustained economic gains without first making significant improvements in agricultural productivity," said Bill Gates, co-chairman of the Gates Foundation. "These strategies have the potential to transform the lives and health of millions of families."

Melinda Gates said that a trip to Kenya in March showed her how improvements in agriculture could make a big difference.

The couple saw hopeful signs in the work of African plant scientists, entrepreneurs starting seed companies and agricultural dealers introducing new tools and practices to farmers. The time is right to support and expand on those efforts, they said.

"It was so impressive to be on the ground in a place like Kenya to see the work that has already been done there," Melinda Gates said.

The goals over the next decade are ambitious: Introduce 400 new and improved crop varieties, work in 20 as-yet-unspecified African countries to eliminate hunger among 30 million people and move 15 million more out of poverty, said Rockefeller Foundation President Judith Rodin.

Based in Nairobi, Kenya, AGRA will address soil fertility and irrigation, farm-management practices and access to markets and financing.

Gates said the foundation's investment in agriculture will probably never match the whopping amounts of money being devoted to prevention, treatment and cure of diseases like malaria and tuberculosis.

But the foundation's critics — and even many of its admirers — have long urged the Gateses to address the underlying roots of poverty, rather than just focusing on technological fixes for specific maladies.

"Several of us have been telling them they should get into agriculture," said Pedro Sanchez, a MacArthur "genius" grant recipient and director of Columbia University's Tropical Agriculture Program. "What's the point of having people free of malaria if they're just going to die of malnutrition?"

Just as the Gateses' attention has transformed long-neglected diseases into high-profile causes, Sanchez hopes the new investment will do the same for African agriculture.

"When they speak, people listen and listen carefully," he said.

Africa presents a greater challenge than Asia or Latin America, where a few dominant crops like rice and wheat can be grown almost anywhere.

"In Africa, you've got many different crops and many different environments," said Gary Toenniessen, director of The Rockefeller Foundation's food-security program who will become AGRA's interim president.

Growing conditions can vary so much that two different strains of maize are grown in regions of Kenya less than 15 miles apart. That means researchers will have to develop multiple varieties of Africa's eight to 10 major food crops.

And unlike rice and wheat, which readily produce seeds that can be shared from farmer to farmer, most African staples are hard to breed. Only a handful of labs in the world are able to do the complex cross-breeding required to produce plants for propagation.

One goal of the program is to get new crop varieties into the field quickly, said Rajiv Shah, the Gates Foundation's director of financial services and agriculture. "The orientation in these new breeding projects is to make sure these things get commercialized and distributed," he said.

Scientists will work with local farmers, largely women, to develop crops with desirable characteristics. Millet, for example, can be bred for high yield and disease-resistance, but African women also want a variety that cooks quickly and has strong stalks for thatched roofs.

Breeding stations will be established across the continent to develop crops and speed distribution of the new plant strains. Plans are for training programs to turn out nearly 250 crop scientists, mostly educated in Africa and specialized in local agriculture.

The original green revolution, built around strains of crops that require fertilizer, pesticides and irrigation, has been criticized for causing environmental degradation and favoring larger farms.

The Gates-Rockefeller collaboration hopes to avoid past mistakes by focusing on plants that are resistant to insects and disease, Toenniessen said.

At least initially, that will be achieved through conventional breeding methods, not genetic engineering. Not that either group is opposed to the development of GMOs — genetically modified organisms. They just don't want progress slowed by the controversy that can surround genetic modification, Toenniessen said.

The Rockefeller Foundation is also testing "microdoses" of fertilizers. Lack of fertilizer has been one of the biggest impediments to African farming, said Rodin.

One of the Gates' Foundation's first forays into agriculture was a $7.5 million grant awarded last year to splice genes from other plants into cassava, the starchy root used in tapioca, as a way to boost nutritional value, reduce the plant's natural toxicity and increase its shelf life.

Washington State University horticulture professor John Fellman is part of the international project. He's trying to figure out why the roots deteriorate and turn black shortly after being dug up.

After starting with a small handful of scientific projects aimed at improving specific crops, including cassava and sorghum, Fellman says he sees the Gates Foundation's push for broader agricultural progress in Africa as a natural next step.

"This presents a really logical link where the rubber meets the road," Fellman said.

Chris Pannkuk, director of WSU's International Programs Research and Development, says the Gates/Rockefeller investments could revitalize a field where funding has been dwindling for two decades.

But he cautioned against putting too much faith in seed development alone. "I'm a skeptic when someone says that's the magic bullet," said Pannkuk, who has worked with farmers in Afghanistan, Malawi and other developing countries.

Reflecting the Gates Foundation's focus on measurable results, the Africa partnership will include $26 million for a new organization in Nairobi that will monitor and evaluate projects, oversee grants and carry out financial management.

Eric Holt-Gimenez, executive director of Food First/Institute for Food Development and Policy, an Oakland, Calif., think tank, said he fears the Gates Foundation will emphasize technology instead of addressing the roots of poverty.

Many of the world's poorest nations have an adequate food supply, he said. "People are hungry because they are poor. They can't afford to buy all this food that is being produced," he said.

Even some places considered green revolution success stories are having problems now, Holt-Gimenez said. Suicide rates, he said, have soared for Indian farmers in Punjab who have seen their fertilizer debts soar at the same time their soil productivity is diminishing.

"Groups that have been following hunger and food production all these years are very skeptical of technological fixes," he said.

Bill Gates acknowledged that Africa faces a whole host of other problems, such as ongoing civil strife and lack of basic infrastructure.

"This program doesn't fund road building, nor can it overcome political situations ... ," he said. But increasing agricultural productivity "starts a virtuous cycle that we've seen in many countries. There's no doubt there's parts of Africa where this will be successful."