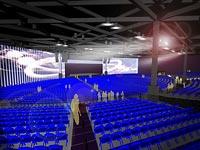 The WaMu Theater in Seattle's Qwest Field Event Center will feature a multi-purpose theater and events facility. Seating capacity will range from 3,300 to 7,000. Seal and Van Morrison have been booked for November, though tickets are not yet on sale. (MICHAEL HALLMARK AND ASSOCIATES)
By Bob Young
Seattle Times Staff Reporter

After months of a rumored partnership between First & Goal and Los Angeles-based AEG LIVE, the two companies announced Tuesday they will team to create a state-of-the-art concert hall this fall with flexible seating for crowds of between 3,300 and 7,000. The venue will be called WaMu Theater, the companies said, based on a 10-year naming-rights deal with the Seattle bank that has been known as Washington Mutual but is beginning to go by WaMu.

Seal will play the opening show at the new theater on Nov. 3, followed by Van Morrison the next night. The companies said they will invest in sound, lighting and amenities to improve the concert hall, once called the "worst venue in town" by Seattle Times music critic Patrick MacDonald.

The hangarlike event center is mainly known for boat, RV, car and home shows. But it has hosted concerts by popular bands such as The Strokes, White Stripes and Dashboard Confessional.

AEG LIVE is part of Anschutz Entertainment Group, which owns or controls the Staples Center in Los Angeles and concert venues in Manhattan and a Dallas suburb. The new partnership between First & Goal and AEG LIVE creates a new brother act ­-- Tod Leiweke is CEO of the Seahawks and president of First & Goal; his older brother Tim is the top executive at Anschutz Entertainment Group.