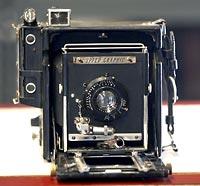 In the midst of the mass exodus from film to digital photography, there are some who prefer to hang back. CameraTechs, a camera-repair and used-equipment store in Seattle, is staunchly dedicated to film cameras and equipment.

"We are going to be in this till the end," said William Jones, the store's owner. "Big film love down here, basically."

Joe Owens, a CameraTechs employee, estimated that 300 cameras in the shop were film cameras.

CameraTechs has stopped local advertising and is trying to reach a national audience by advertising online. The store has had customers from New York, New Jersey, Louisiana, Texas, Hawaii and Alaska.

Although the store does carry some digital cameras, Jones is trying to create a name for CameraTechs as the place to go for film equipment and camera repair. He says there will always be a market for film photography.

Film photography will never be as popular as it used to be, experts say, but, as they did with vinyl records, enthusiasts will keep it alive.

Those who choose single-use cameras either don't want to spend big bucks on digital cameras or don't want the risk of messing up an expensive camera, whether they're going hiking or teaching children how to take pictures.

The University of Washington's photography program hasn't kicked film out the door — not yet, anyway.

"It is exciting, but it's hard to keep up with it financially," said Ellen Garvens, a UW associate photography professor. "Software is expensive, and things are out of date quite quickly."

Film and digital photography are taught in the introductory courses and after that students are allowed to choose the method they prefer.

Paul Berger, a UW photography professor, said some prefer the charm of the darkroom while others opt for the latest and greatest in digital photography.

"We try to integrate all of it together rather than declaring who's king," Berger said.

Integration also includes moving back and forth between film and digital. Students can shoot digital photography and process it in the darkroom or take pictures with a film camera and scan it onto a computer for editing and printing.

PhotoWorks, an online photography-services company formerly known as Seattle FilmWorks, has spent about five years transitioning from film to digital photography. But while the majority of their services deals with digital, the company still develops pictures from film cameras.

Kelley described three kinds of people who use film today:

• The hobbyist who likes to play in darkrooms and thinks film is an exciting mode.

• The "laggards," who haven't stepped into the digital age because they're comfortable with film.

• And those, including single-use camera users, who take photos with film and digital equipment.

"The average person will go where products and choices are readily available," Berger said.

"They have to hunt down Uncle Fred or Grandpa," Berger said.

So why stick with film when the rest of the crowd is stampeding toward digital? Garvens, Jones and Owens agree that film offers some things digital does not.

"Digital is very cold," Jones said. "You can't get the same feel you can tweak out of film."

Said Owens: "Younger people coming in [to CameraTechs] are not so impressed anymore by the cleanliness and the clinical nature of digital photography. They want the gritty, slightly out of focus look that a Polaroid will give them."

Bill Jones, owner of CameraTechs in Ballard, looks over some of the camera gear for sale at his store that uses film. CameraTechs also repairs all kinds of modern and vintage camera equipment. (MIKE SIEGEL / THE SEATTLE TIMES)