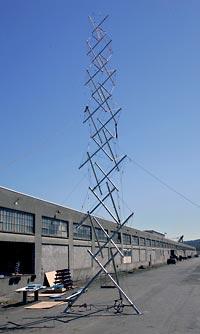 The 45-foot-tall sculpture relies on tension and compression to maintain the shape of its network of cables and tubes.
By Charlotte Hsu
Seattle Times staff reporter

A New Orleans fixture of crisscrossed steel tubes and cables, "Virlane Tower" once rose 45 feet in the Museum of Art's sculpture garden. A year ago, Hurricane Katrina pummeled the sculpture to pieces.

Last week, beside a South Seattle warehouse, artists completed restoration of the tower — 2,500 miles from its home. When it returns to Louisiana this month, it will stand as a sign of resilience, a finished work in a region that also is being rebuilt.

Of 53 pieces in the New Orleans Museum of Art sculpture garden, "Virlane Tower" was the only one severely damaged by Katrina.

A Seattle art-fabrication company, pinwheel corp., has done most of the work for the tower's artist, Kenneth Snelson, in the past few years. So after Katrina, the pinwheel team brought "Virlane Tower" back to Seattle for repairs.

They reassembled the sculpture last week for the first time, transforming pieces and strands of nondescript metal into art.

The tower's structure seems to defy gravity with its layers of heavy tubes suspended on cables — 900 pounds of metal that seem to float.

"It's rising again," Snelson said on the phone from New York, where he lives. "Maybe New Orleans will rise again. I would like to think so.

"The question of how this little sculpture relates to that mammoth catastrophe, I can't answer it. Because in a way, it's minuscule compared to these big problems."

Patricia Chandler, curator for the collection of New Orleans businessman and philanthropist Sydney Besthoff, who donated "Virlane Tower" and other sculptures to the museum, said restoration is vital because art offers solace in hardship. Admission to the garden is free.

"People go walk and have their eyes filled with peace and beauty, and it makes them feel better," Chandler said. "They can go back to the frustrations and the difficulties and the heartache of the rest of life with more strength."

Philip Stewart Jr., pinwheel's founder, will travel to New Orleans this month to reinstall the tower in a museum lagoon.

In the days after Katrina, Stewart flew to New Orleans to see the sculpture. He found devastation everywhere, the tower a part of it. Photographs on Stewart's laptop show the tower in the garden, hanging limp, its top sunk in murky water.

The hurricane's winds had whipped the sculpture, breaking it. Saltwater that poured in as levees gave way eroded the piece's steel, leaving behind rust and barnacles.

Stewart recovered about two-thirds of the sculptures' tubes. Its cables didn't survive. What was left of the tower rode cross-country to Seattle in a truck.

Then the tedious business of ordering custom-made parts began. There was a four-month wait for some tubes because suppliers can't quickly meet the demand for high-quality metals, Stewart said.

Snelson said that in creating the tower 25 years ago, he wanted to see how high he could build. "Reaching for something" is a fundamental desire, he said.

"Like a Jack and the Beanstalk," he said. "You make it tall enough, you might be able to find a giant or something at the top."

One day last week the sculpture lay in pieces around the warehouse studio, its parts dwarfed by high ceilings and tons of machinery for shaping metal and glass.

Dozens of cables, each made from 19 wires pulled around one another, were splayed in piles on sheets of wood on the floor. Short, cylindrical pieces called hubs sat in rows of three on a table in a high-ceilinged room filled with the clang of tools and the sound of grinding.

Stewart said the beauty in Snelson's art is not in its parts but in the power of its design, in the amazement people feel at its delicate balance.

It didn't matter that wind knocked the tower down, or that floodwaters corroded its parts, Stewart said.

The spirit of the sculpture, like that of a city, was what mattered, he said.

It was what a hurricane couldn't take.

"Virlane Tower" by the numbers