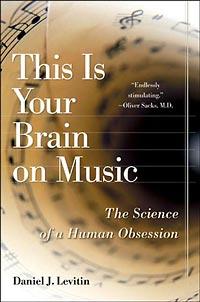 By Fred Bortz
Special to The Seattle Times

In the summer of 1969, 11-year-old Daniel J. Levitin spent $100, representing about 135 hours of hard work weeding neighbors' gardens, on a stereo system. "I didn't listen particularly loud," he writes, "at least not compared to my college days when I actually set my loudspeakers on fire by cranking up the volume too high, but the noise was evidently too much for my parents."

So young Daniel's businessman father made him a proposition. He bought his son a pair of headphones in exchange for a promise to use them whenever he was home. That turned out to be a life-altering event, writes Levitin in the introduction to "This is Your Brain on Music: The Science of a Human Obsession." It forever changed the way he listened to music. To him, "records were no longer just about the songs anymore, but about the sound."

That discovery launched Levitin on a career as a professional musician, sound engineer and record producer who worked with innovative world-class recording artists, earning gold records along the way.

He couldn't help wondering what ingredients went into musical success. He wondered what creativity is and where it comes from. He was curious about the emotional impact of music and the role of perception, especially "the uncanny ability of great musicians and engineers to hear nuances that most of us don't."

The questions eventually became as compelling to Levitin as the music itself. He went back to school to find the answers and emerged with even deeper questions instead. He morphed from a musician into a scientist, and today he heads the Laboratory for Musical Perception, Cognition, and Expertise at McGill University.

The goal of musical performance is to unite artist and audience in a common experience. Levitin's writing aims for a similar convergence. Setting jargon aside in favor of everyday terminology, he gives readers enough background to understand what to listen for in music and to connect what they hear to his science.

The first four chapters describe the elements of musical sound from pitch to timbre, and qualities such as loudness, rhythm and harmony that combine to produce a physical response in the listener. They also discuss how emotional and intellectual responses arise from auditory signals and neuro-chemical impulses. A chapter called "Anticipation: What We Expect from Liszt (and Ludacris)" shows the musical importance of both familiarity and novelty.

With those basics under their belts, readers, with Levitin, leap from the experience of music to the exploration of the broader themes of perception and cognition. Then they plunge beneath the thinking mind into the living brain, discovering how responses to music arise from the physical structure and electrochemical activity of the most primitive and the most highly evolved subsystems of that remarkable organ.

The remaining chapters discuss Levitin's favorite research questions. These include the nature of expertise in music and in other realms, and the reasons for individual and universal musical preferences.

The final chapter, "The Music Instinct," disputes a hypothesis of noted cognitive scientist Stephen Pinker, who argues that music evolved as a happy byproduct of linguistic ability. Levitin argues that, like a peacock's tail, music serves as a powerful display of reproductive fitness.

And unlike language, it involves every subsystem of the brain, including the primitive emotional centers, making it especially effective for bonding individuals to each other and to the group.

Every human brain is on music, he concludes, and the species is better for it.

Physicist Fred Bortz (www.fredbortz.com) is the author of 15 science books for young readers, including "Mind Tools: The Science of Artificial Intelligence."