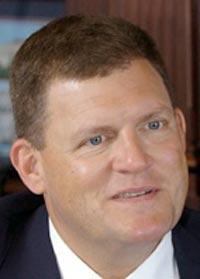 Clay Bennett
By Blaine Newnham
Special to The Seattle Times

Clay Bennett dropped the "H" word, and if he's taken at his word, then KeyArena is out as a future home for the Sonics, and so is Seattle.

Bennett, the out-of-town owner of the Sonics, said he wants a "world-class," multipurpose arena that could include a National Hockey League team.

Maybe Bellevue will build him one, but Seattle won't. Even spending $200 million to upgrade KeyArena isn't going to make it palatable or possible for the NHL to put a team here.

And imagine Seattle spending $400 million to build an arena when it already has one. Or where it would be.

Could it be that Bennett is using hockey as one more roadblock for Seattle, making KeyArena obsolete, in effect greasing the skids to take his team back home to Oklahoma?

I'm seldom a cynic, but there is certainly more we don't know about Bennett and his intentions with the Sonics than we do know.

There's always been a lot of talk about the NHL coming to Seattle, but that's all it has been. Right now, the NHL says it doesn't plan expansion and the only franchise that appears to consider moving is Pittsburgh, where the new owner of the Penguins, Sam Fingold of Connecticut, is demanding a new arena.

If he doesn't get one, best guess is he'll move into the new arena being finished in Kansas City, one built in part by Philip Anschutz, owner of the Los Angeles Kings. The hockey boys tend to stick together.

There are other NHL suitors. Hartford and Winnipeg lost teams and want them back. Another possibility is Houston, a huge market where the owner of the NBA team, the Rockets, at one time tried to buy the Edmonton Oilers.

And, of course, there is always Oklahoma City, with its relatively new arena. There always seems to be Oklahoma City.

Seattle has an interesting hockey history. The Metropolitans were the first American team to win the Stanley Cup in 1917, and the Totems were a Western Hockey League powerhouse in the 1960s.

In the early 1990s, Barry Ackerley, owner of the Sonics and billboards across the West, bought property south of the Kingdome where Safeco Field sits today.

He wanted to build his own arena, partnered up with Ed Snider, owner of the Philadelphia Flyers, for an arena that would be home to both NBA and NHL franchises.

"We were three-quarters of the way there," said Bob Whitsitt, who was brokering the deal for Ackerley, "when Barry pulled the plug. He was having a bad quarter with his businesses."

Whitsitt said Ackerley nearly sold the property to a real estate developer before selling it to King County, a move that would have changed forever the sports landscape in Seattle.

The next-best deal for Ackerley was at Seattle Center, where the Coliseum would be revamped and the Sonics would share the cost of construction.

"I remember sitting in meetings when Barry made it very clear he didn't want the building to work for the NHL," said Whitsitt. "He wanted a building that would be designed strictly — and intimately — for basketball. Barry was afraid advertising dollars and corporate dollars would go away from the Sonics to hockey and that he'd have to compete for dates."

There was also the sheer geography, the size of the hole that could reasonably be dug at Seattle Center underneath the old Coliseum roof, which, according to the Queen Anne neighbors, had to remain so the new arena wouldn't rise higher. The building's shape ultimately precluded a full-size hockey arena, placating Ackerley in the process.

The T-birds of the WHL play there now with a modified setup that restricts views of the ice and accommodates only about 10,000 fans.

There was the problem, too, that no one in the Northwest at the time seemed to think an NHL franchise was worth $50 million. Fingold's successful bid this year to get the Penguins was $175 million.

As Whitsitt explained, Ackerley was in favor of hockey when there was a possibility that he would own the building. Once he was relegated to tenant status, he didn't want the competition.

Maybe KeyArena would have done better had it been built for hockey, but maybe there was never enough corporate money in Seattle to support another major professional sport and the University of Washington.

And was there ever a team to be had?

Paul Allen had a ready-made building in Portland for the NHL plus the motivation of providing programming for a 24-hour sports channel, but still couldn't — or wouldn't — get a team.

In the end, all Allen did was act as leverage to keep the Penguins in Pittsburgh.

You can't blame Bennett for wanting as much as he can get. Multi-purpose, world-class, it all sounds good, but the effect is to eliminate KeyArena and put the pressure on Bellevue.

And to what end?