Consider how much more entertaining Larry King would be if his guests were boozing it up and draped with beautiful women.

For anything close to that, you have to go back a generation or so to "Playboy After Dark" (Morada Vision, 1968, unrated, $39.98). New to DVD (and including the 1959 incarnation, "Playboy's Penthouse," but minus the suspenders), the show featured Playboy founder Hugh Hefner as the host of cocktail parties that boasted incomparable amalgams of cool musicians, comics, actors and authors.

Most of us will never be invited to the Grotto. So I jumped at the chance to throw on a Speedo and rap with "Hef" — OK, no Speedo — shortly before reports that he suffered a stroke prompted the 80-year-old to issue statements that he's never felt better. He was in jovial spirits.

Q: I've never asked another man this before, but what are you wearing?

A: I'm wearing pajamas, of course.

Q: Nice that there's something left to believe in. These shows are some swingin' time capsules. Does anything in them make you cringe?

A: Oh, I think the shows by their nature are relatively unrehearsed parties. The strength and weakness of the shows is exactly that. It's a typical variety show — but the conceit of the show is that you, the audience, are there at the party through the subjective camera. It comes up in the elevator, comes into my apartment, and you are there for the entertainment and the ad libs and the conversation, etc. And viewed now, it is a wonderful retrospective look back at the pop culture of that time, so I think by and large my reaction is: great nostalgia.

Q: Something you don't see today: Drinking and smoking on talk shows.

A: Yes, well, of course the sensibilities in those days were very different. Although I think even then very few people were actually drinking on shows. When we did "Playboy's Penthouse," we had an open bar. And quite literally, because the segments were shot as the performers were available during the day — they were not shot in chronological order — there are some instances in which you see the partygoers drinking throughout the show and slowly sobering up. It was a little surreal.

Q: The guests were "People we dig and who dig us."

A: I think the reality is that there were some people appearing on our shows that were not appearing on other shows. Lenny (Bruce) didn't do a lot of television in those days. Lenny was a very close friend of mine. This was in 1959, 1960; the House Un-American Activities thing was still going on. So that there were some performers ... who were left of center and were not welcome on network shows.

The other thing that added controversy to the show, of course, was the fact that it appeared to be a party in my apartment and we had black and white guests socializing together.

Q: In 1959, that must have ranged somewhere between enlightened and scandalous.

A: Exactly so, and we knew going in as a matter of fact that we would not be getting any syndication in the South — and didn't. Nat King Cole was on the first show, and he had had his own short-lived network show in the middle '50s and closed it down because it couldn't get sponsors. And his comment at the time was, "Madison Avenue is afraid of the dark."

It's difficult for young people who by nature have a very poor sense of history to realize how different the world really was in the 1950s and early 1960s. The really dramatic social-sexual changes that took place in America arrived in the middle 1960s.

Q: As a champion of Lenny Bruce, you asked him about his "sick" comedy.

A: Playboy was the first to publish a profile of Lenny in a national publication. ... He was referred to as a "sick" comic, and my view reflected in that conversation is that he wasn't sick, he was reflecting and commenting on a sick society.

When they really started to take him apart — and the authorities did in the early '60s, and eventually drove him to his death — during that period where it became increasingly difficult for him to get booked, I assigned a ghost-written autobiography of his life that we ran in installments in the magazine and then published it in book form.

Q: As moments go, you can't beat Sammy Davis Jr. dressed like a sultan, telling Bill Cosby to get rid of his cigar and singing "I Gotta Be Me." What are your favorite moments?

A: Oh, there are a lot of them, but certainly his performance in that show. And when Sammy appeared on that show, he really took it over. In other words, he didn't just do a number or two. He was happy to do 20 minutes. The joke about Sammy in that time frame was, in the middle of the night if he opened up the refrigerator and the light went on, he'd do 10 minutes.

Q: Mort Sahl said 1969 was a year when, if a man tried to collect his thoughts, he'd be arrested for unlawful assembly. How about in 2006?

A: We do have a lot more options, and part of that is a change in terms of science and technology, the arrival of the birth-control pill, Viagra, the arrival of the Internet and pay television, cable television, etc. So human sexuality is a much more open part of our national fabric today, but it is still very controversial, particularly in America and certain other parts of the world.

Q: Younger people who didn't grow up with "Playboy After Dark" see you on "Girls Next Door." Why only three girlfriends?

A: Well, I did have seven. That's an unusual way to express that: "Why only three?"

Q: Slowing down, are you?

A: I'm slowin' down! I just had my 80th birthday; I'm slowing down. But the reality is, I downsized intentionally about three years ago, and I'm much happier for it. The three that I have now are real keepers, and they helped to make this the absolute best time of my life. And the premiere of the second season of "Girls Next Door" was the highest-rated show in the last four years on E!

Q: How do you respond to people like Howard Stern who say your thing with the three girls is just for show?

A: (Laughing.) Well, if anybody still believes that — remember that the girlfriends were there before there was any talk about doing a show. And the reason for that, quite frankly, is I was married, I was off the scene for 8 ½ years, and I was faithful to that marriage, and I came out of that a little emotionally beat up and bruised, 'cause I really worked very hard at that marriage. And within the space of a few weeks after the end of the marriage, I met a young actress, Brande Roderick, and we started dating. And in the same time frame met a pair of twins, Sandy and Mandy Bentley from Chicago. So for the next two years I was going with Sandy, Mandy and Brande, as corny as that is.

Q: Do you believe the creator of Viagra deserves a Nobel Prize?

A: (Laughs.) Well, it certainly arrived at the right time, because I got my first prescription for Viagra in April on my birthday, just a handful of weeks after my separation from my marriage.

Q: I've got a feeling you're doing more to sell those than Bob Dole.

A: Early on I said that Pfizer was underselling the product, that this was the best legal recreational drug out there.

Q: As a leader of the sexual revolution, how do you feel about American society still nearly coming unraveled by Janet Jackson's breast?

A: Well, I think we live in strange times. I think we've made tremendous progress in terms of sexual freedom and freedom of choice, but there is a conservative constituency - part of the right wing Christian fundamentalists, part of them in positions of power in the federal government. So we do live in curious times, and I think that that is something that I really understand. I'm an 11th generation descendant of William Bradford, the Puritan forefather who came over on the Mayflower and was the first governor of the Mass Bay Colonies. And I understand those Puritan roots because that was my family. But that conflict related to play, pleasure and sexuality is as American as apple pie.

A: Exactly. I think the great danger on this planet is the fact that we have moved into the 21st century in terms of science and technology but are still superstitious savages in the jungles when it comes to religion and politics.

Q: How do you think the access to instant nudity on the Internet affected Playboy's place in the world?

A: There was a period of time from 1953 on through the '60s in which we had that world by and large to ourselves, but I think today as you well know anything is available. I think the reason that Playboy has succeeded where other competitive publications have fallen by the wayside is because we were never really a sex magazine. We were a lifestyle magazine with sex as one important ingredient in a romantic perception of life. And I think that the quality of the magazine and the fact that we expanded into the other kinds of areas and were the first American magazine to use the Internet; just as we were one of the very first to use television to promote the magazine, and the fact that the brand is now world famous, one of the most famous brands in the world on a global world. One of the unique things is the fact that the magazine is not yet permitted on the mainland of red China, but there are over 300 Playboy stores and boutiques selling Playboy products on the mainland of red China. In other words that rabbit is world famous and has very little competition. 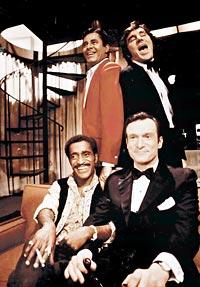 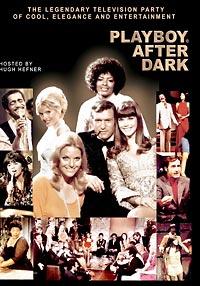