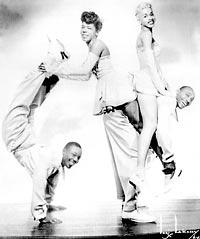 Here's a tip for living a long, active life: Become a tap dancer or a Lindy Hopper.

This pointer isn't drawn from any cache of scientific research, but from the long-running vitality of some legendary hoofers taking part in the "The Masters of Lindy Hop and Tap," a five-day festival starting today at Seattle's Century Ballroom.

Among those who are scheduled to teach and perform at the event are the 92-year-old Frankie Manning, who helped spearhead the Lindy Hop craze at Harlem's Savoy Ballroom, and Norma Miller, an octogenarian dancer-choreographer featured in Ken Burns' PBS "Jazz."

Patrons who catch the festival's live shows, panels and film screenings, and local dancers who appear in the "young talent showcase" and sign up for classes, can also heed the classy footwork of such sage dancers as Skip Cunningham (who hoofed on Broadway in "Eubie!" and other shows); Dawn Hampton (a sax player as well as a smooth mover); and Jeni LeGon, who turns 90 this month. And there will be public dances, where you can take to the floor yourself.

Century Ballroom honcho Hallie Kuperman said she is footing the whole festival budget of about $50,000 to pull off the fest (which she hopes will be an annual event).

"I had a conversation with my accountant and said, 'How much can I lose?' Next year I'll write grants for it, because this is a historical and community event that should get funded. But (this year) I'm willing to lose some money just to do it."

The festival plan took shape after she scheduled some master classes here with Manning and his dancer son Chazz Young.

When someone suggested she host a larger celebration of "old-timers," Kuperman (a dedicated swing dancer and instructor herself) thought: Why not bring in more of the elder movers who tore it up in old movies and at the Savoy Ballroom and the Cotton Club back in the 1930s and '40s?

"We made a list of everybody we could come up with," she recalls, "and it just kept growing."

Also on that list are a few young'uns, notably two granddaughters of the late, great Fayard Nicholas. He was one-half of the Nicholas Brothers (his brother Harold was the other half), whose astounding leaps, splits and glides graced such musical films as the Gene Kelly classic, "The Pirate."

"My sister Cathie and I have been dancing since we were very little kids," says Nicole Nicholas, a 21-year-old Stanford University graduate who is still smitten with her grandfather's art form. "We've never known a life without dance."

When the old-school dancers appear at festivals like Kuperman's, they don't just impart the steps and rhythms of their favorite routines. They also pass on the excitement and energy of those bygone Harlem nights, when tappers were accompanied by jazz bands and droves of dancers (mostly African Americans) would cause a frenzy with their exhilarating partner moves.

The Lindy Hop (named after Charles Lindbergh's pioneering transatlantic flight) is primarily a social dance. There are no hops in it, points out Kuperman, but it often features breathtaking holds, turns, breakaways and thrilling lifts like the airborne "back to back flip."

At its best the "Savoy style" of the Lindy Hop (which later mutated into the jitterbug) is considered lithe, smooth and open to creative invention.

The surviving masters of the form such as Manning and Miller are "not doing aerials anymore," said Kuperman, "but they embody the rhythm and spirit of the music, and what it is to be gracious and dancing with another person. So often today dance is more about 'please watch me.' "

Manning says he keeps on traveling and teaching "because I love to dance myself, and I would like other people to know how wonderful this dance is, and how happy it makes you feel."

He's had a lot more invitations to do that since swing dance became hip again, in the early 1990s. Manning even was hired to teach actor Denzel Washington some hip moves for the film "Malcolm X."

But those turning out for swing lessons and shows at the Century Ballroom these days tend to be young white fans, not African Americans.

Nicole Nicholas acknowledges that few of her black peers share her enthusiasm for vintage tap.

"My granddad used to wear tails, and the Nicholas Brothers always looked very professional and elegant on stage," she commented.

"Now the fashion is big clothes, and it's a whole different mindset. But luckily we have people like Savion Glover and Jason Samuels Smith reinventing the art of tap and saying there's a place for us too." At the Seattle fest, however, the Nicholas Sisters will re-create two of the Nicholas Brothers' classic tap routines. Before Fayard Nicholas passed away in January, at 91 (Harold died in 2000), did he give his granddaughters a few pointers?

"Yes he did," said Nicole, who studied engineering but now wants to be a dancer and producer. "Even when he wasn't able to get up and demonstrate things, he'd clap his hands in time to help us get the rhythm just right."

Jocelyn Miller laughs while swing dancing with Kevin Buster at the Century Ballroom last Sunday. "The Masters of Lindy Hop and Tap" festival kicks off today with a public swing dance at the ballroom. The festival continues through Sunday with workshops and dance classes. (ERIKA SCHULTZ / THE SEATTLE TIMES)

Frankie Manning, pictured in the top photo on the bottom right with the Congaroo Dancers, now 92, will teach and perform this weekend at the Century Ballroom. Also scheduled to appear is Norma Miller, second woman from left in the bottom photo on the 1941 set of "Hellzapoppin'." (THE SEATTLE TIMES) 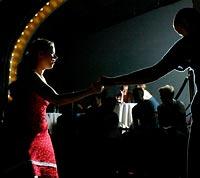 During Century Ballroom's weekly swing night, a pair dances in the middle of a crowded dance floor. "The Masters of Lindy Hop and Tap" dance festival begins today at the ballroom. (ERIKA SCHULTZ / THE SEATTLE TIMES)

"The Masters of Lindy Hop and Tap" kicks off today with a public swing dance, continues through Aug. 20 with a formal dinner, workshops, dances, exhibitions, panel discussions and screenings of the documentary films "Queen of Swing" and "Living in a Great Big Way."

Details: Schedule, tickets and other details at www.centurymasters.com or 206-324-7263.