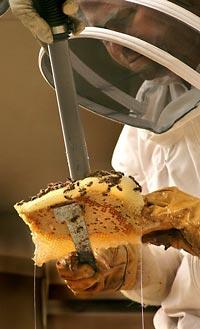 Eckholm gently removes part of a honeybee hive from the education building at the Cedar River Watershed, positioning it so bees can be vacuumed into a container.
By Lisa Wogan
Special to The Seattle Times

Judy Mosset was quietly enjoying a sunny day on the deck of her Seward Park home when she saw a dark cloud dodging and weaving across her front yard. "It was like you see on TV when the locusts come," the 55-year-old airline attendant says.

She grabbed her cats, ran inside and watched through a picture window as the swarm of probably more than 10,000 stinging insects swooped up into the air and onto her roof.

After what she thought was a reasonable interval, she ventured back outside. Any evidence of the apparition was gone. Or so she thought, until a plumber repairing a leak in the basement heard sounds, maybe buzzing, in the chimney. A few hammer bangs on the chimney, and she heard it, too.

Mosset called around for help and ended up on the phone with John de Groot, one of about 20 volunteer honeybee swarm-catchers in the area.

Swarm-catchers are noncommercial beekeepers who gather up unwanted bee swarms, transplanting them to their own or others' backyard hives, usually for free.

As heroes go, swarm-catchers will never be featured in a movie or even a comic book. They change into their white coveralls, veil-covered pith helmets and long leather gauntlets in the bright light of day. Their only gadgets are ladders; flashlights; and jury-rigged, low-suction vacuums attached to water-cooler jugs that look like a high-school experiment.

But for people deathly afraid of bees and for gardeners who rely on the busy pollinators, Superman could do no more.

A few days after the swarm sighting, de Groot fearlessly peered down Mosset's chimney. She was lucky. The bees had not settled in; the buzz was just a loose screen. Mosset was relieved and a bit embarrassed about putting de Groot to the trouble of a visit, but all was not lost.

By the time de Groot left, Mosset knew how bees set up a colony, the life cycle of yellow jackets and how to create wood nesting sites for beneficial mason bees. A chance to talk about bees and their ilk is never lost on a beekeeper.

On the way home, de Groot says this is the first time there have been no bugs at all. A 54-year-old computer-database administrator, de Groot has been catching swarms for about 10 years, almost as long as he's been beekeeping. His car is loaded with bee gear and smells of menthol, which is used to treat tracheal mites, which can infest and harm bees.

Every swarm has its challenges, he explains. Sometimes the "bees" are actually wasps, or the swarm is high up in a tree or buried in lathe-and-plaster walls, or the fuzzy evacuees are "grumpy."

De Groot shudders over his first swarm call, which also involved a chimney. When he arrived, police cars and fire trucks were on the scene; he felt his lack of experience keenly.

"I was the expert, and I didn't know what I was doing," remembers de Groot, who didn't even own a bee vacuum yet.

The thoroughly terrified homeowner had already deployed "thermonuclear pesticides and a roaring fire." When de Groot tried brushing bees into a box, heat from the fire singed off all the bristles. The surviving bees didn't put up much of a fight. They "were demoralized," he says, speculating that maybe the queen had been killed. The best he could offer was to finish the job of destroying the hive — a disappointment for any beekeeper.

A bee swarm is a natural stage in bee-colony development. At some point, usually early in the summer (but it can happen later), as the population in an individual hive swells, a second queen will be raised.

Because two queens can't share a hive, the old queen will depart, taking about half the colony with her. This can include tens of thousands of bees traveling in a cluster with the queen at the center. They often alight on branches in a distinct "droopy beard" shape, waiting for scout bees to find a new permanent residence.

The ironic thing about swarms is that while they provide dramatic visuals, they are not usually dangerous.

"The swarming bees have bellies full of honey, which they took before leaving the old hive, so they aren't able to sting people," says George Nelson, a 72-year-old beekeeper who captures about six or so swarms each year to replenish his hives.

The swarming bees are also more low-key because they are focused on finding a new home and have no stored honey or brood to defend.

When a swarm issued from one of Bruce Eckholm's hives, his Phinney Ridge backyard was temporarily transformed into a sea of bees. He stood among them in T-shirt and shorts.

"Swarms are incredibly safe," says Eckholm, a 38-year-old former software developer who spent the summer juggling swarm calls and a final insect-identification class to complete his master's in entomology.

You'd be grouchy, too

Often swarm calls aren't technically for swarms but for an established colony. That's when things get trickier. Disturbing established bees upsets them.

"It's a half-day of very messy labor," de Groot says. "It's also quite sting-prone. You start ripping apart someone's house, and they get grouchy."

Homeowners can't really wait bees out. Unlike yellow jackets and wasps that die off in the winter and rarely return to a nest, bees will stay in a hive location for years, with swarms spinning off once or twice annually.

So a hive in a wall, a porch eave or a tree snag can build up a lot of comb over time. It's critical that everything be removed along with the bees, because 100 pounds of honey is a magnet for ants, rats or cockroaches — pests that bring a host of new problems.

Bees aren't the only danger

Ambra Wadley, a beekeeper/swarm-catcher from Kent, pulled seven combs from a colony that had taken up residence only a few weeks earlier at the Larkspur Landing hotel in Renton. Several were loaded with sweet, straw-colored honey.

Wadley, who is afraid of heights, agreed to be hoisted several stories high in a cherry picker to reach the fourth-floor balcony. There she vacuumed up 12,000 bees, filling two water jugs, which were warm to the touch because of the vibrating bees inside.

Swarm-chasers have been known to go to great lengths to pursue their quarry — hanging from branches, scrambling through blackberries, balancing on ladders.

Last year, Jerry Mixon, aka "Jerry the Bee Guy," found himself in a swarm-chasing pickle.

"I was on top of the house, on top of the chimney, and I thought, what am I doing up here? If I live through this, I'm not ever going up on a chimney this high again in my life. I have to use my head."

Mixon, 72, also provides poison-free removal of other stinging insects. He takes away honeybees for free but charges an hourly rate to transplant bumblebees and to remove wasps, hornets and yellow jackets. The latter, while beneficial carnivores, cannot be effectively relocated.

"I took yellow jackets out of a preschool yard," he says. "The ladies were so happy because the kids were not in danger anymore. It's kind of, in a small way, that hero feeling."

By mid-July, Mixon had weathered 17 stings and collected 25 honeybee swarms. He says he does it for the "free-bees."

"We save the bees"

Swarm-catchers often put the "wild" swarms in empty bee boxes to start new hives or to replenish the population in an existing hive. Many of Mixon's bees go to his companion Dawn Corl, who keeps hives in their Ravenna backyard and an apiary in Monroe. But like all unsung heroes, there is also the greater good.

"Our purpose in collecting the swarms is to keep the bees alive, to prevent people from spraying them with Raid and calling exterminators," Mixon says. "We save the bees."

Most of the public, even those who are fearful, appreciate the critical role of bees and want to do all they can to help. West Seattle beekeeper Tim Celeski remembers one homeowner who fretted over bees left behind after he removed a swarm from her yard.

After any swarm is collected, there are always dozens, sometimes hundreds, of stragglers. Without the queen, they have no place to go and no mission. So generally, beekeepers suggest avoiding the area until they die out.

Well, this well-meaning woman worried that the all-important queen might be among the stragglers. (She wasn't.) So she took out her home vacuum and collected the remnants. Celeski arrived home that afternoon to discover a vacuum bag filled with thoroughly pulverized insects on his front porch.

Just another day in the life of a swarm-catcher.

Lisa Wogan is a frequent contributor to The Seattle Times: vietato@msn.com. 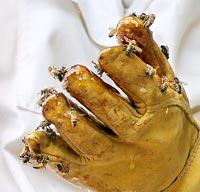 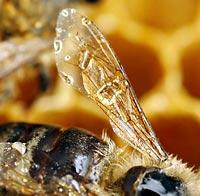 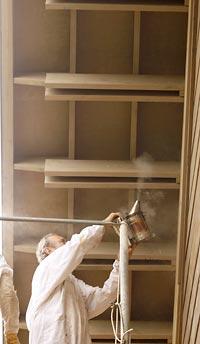 Swarm-catchers smoke out a hive from the Cedar River Watershed. (TOM REESE / THE SEATTLE TIMES)

Bumblebees and honeybees. Bumblebees are big, fuzzy and usually move slowly. Honeybees are smaller but still fuzzier and rounder than wasps. Because they gather nectar and pollen, bees are usually found around flowering trees and bushes. Honeybees sting once, then die.

Social wasps, which include hornets and yellow jackets, tend to have slender bodies and narrow waists. Compared to bees, they look smooth and shiny. Because they are carnivorous, they tend to hang around picnics and garbage. Wasps can sting multiple times.

The Puget Sound Beekeepers Association | publishes a list of beekeepers who will capture and relocate metro-area honeybee swarms for free: www.pugetsoundbees.org.