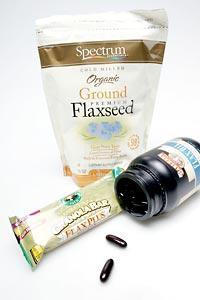 There are many ways to include flaxseed in your diet: You can buy it whole or already ground, and the oil is available in bottles or capsules. Flaxseed is an ingredient in certain breakfast cereals, breads, snack bars and other products. (KEN LAMBERT / THE SEATTLE TIMES)
By Kathy F. Mahdoubi
Seattle Times staff reporter

When Doug Auerbach first started adding flaxseed oil to his diet, he took it straight from the bottle — "not a very pleasant experience," he says.

"I started dabbling in it about a year ago as a part of a renewed focus on good health," says Auerbach, 36, of Ballard, who hopes to reap the many purported benefits of flax, especially those associated with its abundance of essential omega-3 fatty acids.

Talk to any dietitian, and you're bound to hear about the big health benefits of the tiny flaxseed. They may even tell you that though flaxseed and its oil aren't part of the mainstream American diet, they should be.

Research has linked omega-3s with the prevention and treatment of cardiovascular disease, and newer studies suggest omega-3s as a treatment for depression and other mood disorders.

For women, flax has been shown to help regulate menstrual cycles, minimize premenstrual breast pain and relieve symptoms of menopause. A flurry of studies has even connected the fibrous lignans in flaxseed with lower rates of breast cancer.

So should we all take a lesson from Auerbach and start swigging flax oil from the bottle?

There's no question the stuff is good for you. The fatty acids found in flaxseed are a component of cell membranes, indispensable to each of the body's trillions of cells, says Marian Neuhouser, a registered nurse and staff scientist for Fred Hutchinson Cancer Research Center. They're also used to create byproducts that regulate metabolism, blood pressure and cholesterol levels, as well as immune and inflammatory response.

Nonetheless, we shouldn't expect flax products to be a cure-all. "I think that some of these studies are young enough that we can't draw any conclusions just yet," she says.

Salmon, tuna and other marine-based sources of fatty acids are considered the best source of omega-3s, but many consumers avoid fish because they dislike it, are spooked by warnings about mercury and other heavy-metal contamination or worry about the steady depletion of fish populations from overharvesting.

Whatever your politics or lifestyle, it's important to get omega-3s however you can, which includes supplementing your diet with plant-based sources. And flax is by far the plant kingdom's richest source of omega-3s.

Evidence of flax cultivation dates to the Stone Age. Records of medicinal use go back to Babylonian times, and the Greek physician Hippocrates reportedly prescribed flaxseed as a treatment for abdominal pains.

American colonists grew flax on small farms before commercial U.S. production began in the mid-1700s, not for its seed but for its fiber, which is used to make linen cloth. Flax fibers have contributed to some of the world's finest fabrics, paint canvases and artisan papers. Artists may be surprised that linseed oil, the thinning and drying agent they use with oil paints, is derived from flaxseed.

The slick, high-protein meal left behind after the seed is pressed makes a fine animal feed, which a lot of horse breeders use to keep their horses' coats glossy.

Pass through the egg aisle at most markets, and you'll see those omega-3 enriched eggs — from flax-fed hens.

Flax is good for the human heart because its omega-3s reduce inflammation.

Susan Gins, a certified nutritionist with a private practice in Seattle, says flax has long been considered a digestive aid and natural laxative. She says flax oil acts as a lubricant, while the seed is something of a "Roto-Rooter," helping to promote bowel health.

On the cancer front, flaxseed lignans — phytoestrogens found in the seed — have been associated with lower rates of breast cancer. This is one of the cases where Neuhouser says it's too early to start making prescriptions based on the studies, but it's important to keep in mind that lignans do have a powerful effect on hormone-related cancers.

That brings us to the brain. Its dry weight is 60 percent fat, and 25 percent of that is omega-3 derived fatty acids, says Judy Simon, a registered dietitian at the University of Washington's Roosevelt Clinic. That's why militant low-fat diets are not only out of style, they're dangerous, she says.

Omega-3s are essential for proper brain-cell function and the balance of all the neurotransmitters that regulate mood, including dopamine and serotonin. Scientists are researching omega-3s as a treatment for everything from depression and attention deficit disorder to bipolar disorder and schizophrenia, says Simon.

Children especially need adequate levels of omega-3s for their fragile and developing nervous systems, says Neuhouser. Mothers who don't breastfeed should check with their doctors to make sure that formulas are providing enough of these essential nutrients.

For the freshest results, buy flaxseed in bulk and grind it yourself in a processor or coffee grinder. Those looking to get more omega-3s for their buck should go with flax oil, but ground flax has more fiber, protein and lignans, says Higginson.

Refrigerating or freezing flaxseed products doubles the shelf life. Also make sure to keep products firmly closed and out of the sun, because ultraviolet rays and oxidation are lethal for omega-3s.

Mix flax oil or ground seed into yogurt, or use the ground seed to replace a small part of the flour in recipes, as Higginson does in his favorite cherry-crisp recipe.

Auerbach's got the oatmeal-flax-oil ratio down to a science.

"By the time I'm done, I have an awesomely tasty breakfast, " he says.

How much flax oil or flaxseed?

Start at 1 tablespoon, whether you choose flaxseed oil, ground flaxseed or both. More than 2 tablespoons is more than your body needs. One tablespoon of flaxseed has about 40 calories, 2.3 grams of fiber and 2.8 grams of fat, 1.5 grams of which are omega-3s.

Some studies have linked flax with the prevention and treatment of:

Add ground flaxseed or flax oil to oatmeal, smoothies, yogurt or cold cereals, or use ground flax as a partial flour replacement in biscuits, pancakes, muffins, breads and cakes. Add ground flax to hot cocoa, soups or stews for thicker consistency. Flaxseed's oil content creates a gooey texture that can be used as an egg substitute, as well. Use 1 tablespoon ground flax mixed with 3 tablespoons water to substitute for one egg.