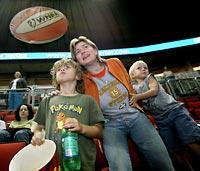 Andrea Jessee, center, and her two sons with partner Megan Primeaux, Jonny, 7, and Jackson, 4, cheer on the Seattle Storm against the Washington Mystics.
By Florangela Davila
Seattle Times staff reporter

Q:When is a sports event more than just sports?

A: When it's a Seattle Storm game and you're a lesbian — single, coupled or raising a family.

Anyone who's been to a Storm game knows the crowd is decidedly female. Women hold hands; some hands wear matching wedding bands and are, on occasion, tethered to some Storm-attired tot.

So, you're shrugging your shoulders. Eh, who cares? But this is precisely what matters because it's all so ordinary. A Storm game isn't some political gay confab, civil-rights rally, must-be-Pride-Month thing — events that get sidelined as "alternative" or worse. Storm games are social shindigs, community gatherings and business-networking affairs.

They're as much a fixture of the city's lesbian community as they are a destination for straight people. And at a time when the future of the Storm, and the Seattle Sonics, remains uncertain, it's worth exploring the significance of the games and who they're meaningful to.

"I'm not a highly social person, but this is something where you see people and you say, 'Oh, hey, let's get together' and we start instant-messaging and e-mailing," says Gretchen Fudala 37, who works at Microsoft.

"I'm completely out but sometimes I'm guarded," says Andrea Jessee of Redmond. "If our boys refer to us as Momma and Mommy, as soon as they address both of us, there are moments when I look around and say, 'OK, what kind of people are around me?' "

Jessee's talking about other places she and her partner, Megan Primeaux, have been with their sons, Jonny and Jackson. They were first introduced to the Storm through a friend in 2003. They weren't that keen on basketball, she recalls. But her experience at that first game: "It was like whoa, this is amazing."

It wasn't only because there were other lesbians in the stands that made her feel that way, she says, but sure, it added something. "I realized that it was very obviously an audience I belonged to."

Jessee and her family attend about half the home games each season; more if her work didn't send her out of town. "I just know that at KeyArena I can completely let my guard down, and I think so many other couples are like that with their kids. It's great for the kids to see other rainbow families."

There are lots of other reasons people go to Storm games. The reason you hear most often is the female athletes.

"I first came because of my grandkids," says Mary Young, 78, of Seattle insisting she's the team's oldest fan. "But after seeing these women play basketball, honestly, they play harder than the men. They get knocked down, and they get right back up."

The Seattle Reign preceded the Seattle Storm, which arrived in 2000. Fans saw the teams as gender-equity victories. Spectators were pre-Title IX athletes; others were feminists who had never picked up a ball. Everyone regarded the women players as important role models for young girls.

A Storm game averages 7,000 people. The audience according to gender: 65 to 70 percent female. That, in fact, is diverse, when you compare the Storm attendance to any of the other teams in the Women's National Basketball Association. The Storm had the biggest percentage of male fans of any team when the league surveyed attendance two years ago.

What hasn't been officially tabulated is the size of the lesbian fan base, although spectators, gay and straight, characterize it as strong.

"The lesbian community has been very supportive of women's pro basketball," said Karen Bryant, the team's chief operating officer, who declined to speculate how large that community might be.

And it would have been a mistake, she added, if the team didn't market to the lesbian community. "Why would you not take advantage of an audience that has always showed support for your product?"

So the Storm has ads in gay and lesbian publications and a partnership with the Greater Seattle Business Association, the lesbian, gay, bisexual, transgender chamber of commerce. It hosts a Gay Pride Group Night and has invited the Seattle Gay and Lesbian Chorus to sing the national anthem.

"We've certainly had feedback from fans who either don't agree with the organization's tactics in outwardly marketing to the lesbian community or with the presence of lesbians in the arena. But it's extremely isolated," Bryant said. "And I'm unapologetic. I'm proud of the diversity of our fan base."

United by green and gold

There's nothing as mainstream or as diverse as a Storm basketball game. Mainstream as in middle-of-the-road, please rise for the national anthem, mom/dad/two kids-with-jugs-of-popcorn in their laps. And diverse not only in a gay/straight way but in the cross-section of lesbians the games attract: booty-shaking 20-somethings; 30-something working mammas; couples of a certain age who'd like nothing better than a night home on the couch — except when the Storm is in the house!

Game night. Green and gold garb. Big "thunder sticks" noisemakers for the taking. Girls tote stuffed Dopplers. Girls sport jerseys that read "Jackson," "Lennox" and "Bird." A teenage boy, who can only be described as strutting, carries a basketball under his arm.

"We're here because of basketball," Wright says. "We're not here because there are lesbians in the crowd. Is it nice? Sure. Is it important to us? Eh."

Lee Haworth, 59, says she was initially drawn to the games not because of athletics but because she wanted to see a women's endeavor succeed. But she's now developed a love for basketball. And yes, there's something unique about a Storm crowd.

"Seattle's not as progressive as we may think," says Haworth. "There's not that many places where you can congregate."

Huddled over a pre-game dinner of Mexican food, Wayne Herzog, 53, and his wife Melany Brown, 52, are longtime season-ticket holders. "Two games ago there was a husband and wife and their two kids," he said about their seat mates. "The weekend before there were two lesbians and their two kids. When you go to a Sonics game it's so male-dominated and very heterosexual."

Half-time and the lining up begins: for face painting; for the women's bathroom; for beer. If you're not into watching the half-time entertainment (dogs racing over hurdles, say) you might also leave your seat to walk around the arena in search of friends.

"I've heard someone call it 'the fruit loop,' " says Jill Gagliardo, 40, a physical therapist and Storm season ticket holder, laughing. The games are must-do happenings for her group of friends who all happen to sit in the same row, in Section 108 together — except for her. So half-time means heading to the Pyramid Ale beer garden to meet up.

"For me, it's supporting women athletes. But it doesn't hurt that our friends are there," says Tamara Murphy, chef/owner of Brasa. After the games, her downtown restaurant typically hosts friend Gagliardo and some other women for a post-game soiree; once a month it's pre-game Girl Thursday.

"We've just never had the time to hang out, and that's what the games have become," Kelly Hudson of Everett, who attends the games with partner Denise Keegan, explains. "There's something exceptional about going to the Storm games. I can high-five with the man and woman who sit in front of me, and you don't get the sense that they're looking at you any differently."

"I come here to watch basketball. But it's great to see a lot of us," said Jill Gagliardo, in blue and white, hugging friend Tamara Murphy, chef/owner of Brasa restaurant. (THOMAS JAMES HURST / THE SEATTLE TIMES)

Andrea Jessee, right, heads to her seats at a Storm game with her sons Jonny, 7, and Jackson, 4. (THOMAS JAMES HURST / THE SEATTLE TIMES)