When a great number of visitors come to the contiguous states, the phenomenon is called an irruption. It is believed that irruptions are tied to the availability of food. (PAUL BANNICK)
By William Dietrich

PAUL BANNICK DOESN'T pursue his birds. He waits for them, sometimes for hours in sub-freezing weather, after careful research of their habitat, habits and life cycles.

"After eight hours straight watching the irruption of snowy owls we had here last winter, I knew what they were going to do when they took off," he recalled.

The result is photography that rises above the ordinary. They capture not just the beauty of our feathered friends, but the personalities of the astonishing variety that fly through Seattle and Washington.

"I try to take photographs that say, 'This is who this is,' " explains Bannick, who is development director of the environmental group Conservation Northwest. "Most of my work is in learning about the subject."

Bannick, 42, developed his love for the natural world during a Bellevue boyhood. Even then he became alarmed at the disappearance of suburban woods and wetlands.

His Northwest roots are deep. His grandfather, Claude, was a Seattle police chief and King County sheriff who gained fame shutting down bordellos — developers were trying to build a 500-room brothel on Beacon Hill in 1911 — and then ran unsuccessfully for governor on a prohibition platform. His father, William, was editor of Boeing News.

Bannick knew exactly what he wanted to do when he grew up — stay out in the backyard where the wild things are — but was told, of course, "You'll never make a living." So he dutifully studied finance and marketing at the University of Washington, joined Paul Brainerd's desktop-publishing pioneer Aldus, then went on to Adobe.

After 15 years in software, Bannick wasn't rich, but financially secure enough to be able to afford to return to his first love, the environment, by working for nonprofits. He brought his financial skills to their cause while turning his lifelong interest in wildlife photography into true passion. His Web site is www.paulbannick.com, and his photos illustrate the KPLU "Bird Note" Web site (www.birdnote.org).

That means frequently getting up before dawn to study the birds he wants to capture with his camera. Before then he will have read about their background and the local botany, anticipating where they will nest and eat. Then he watches for hours.

"The best photos are those you see in your head before you see it in your lens," he says. "I miss shots when I don't see them coming."

The presence of wildlife in general, and birds in particular, is one of the best arguments to persuade the public to keep natural landscapes, he says. "For most of the threatened places in America, there's an owl that can serve as ambassador."

An example are Seattle's undeveloped ravines dominated by alder and big leaf maple. Not only are dead or decaying maples ideal habitat for the screech owl, but the fragments of habitat are too small for the competing barred owl.

Birds also illustrate the unity of the world's ecosystems. Seattle's brilliantly colored Western tanagers are migrants from Latin America. "For some people, that's the closest to South America they're ever going to get."

While Bannick goes far afield, some of his best pictures are shot in Discovery Park near his home. He's photographed the saw-whet owl, snowy owl, hairy woodpecker, kingfisher and bald eagle in Seattle, as well as wrens, sparrows, finches, ducks, seabirds, warblers and many others.

He switched to digital photography 18 months ago to avoid chemical waste. He prefers early or late low light — "most photographs taken after 11 a.m. are worthless" — and usually uses a tripod. He prefers a combination of manual and automatic controls, often setting depth-of-field or shutter speed while letting the camera calculate the rest.

Be patient, try and try again, and let the telephoto do the work, he advises. "Get the longest lens you can afford or rent it. Too many people end up chasing the animal around the landscape, trying to get close."

Bill Dietrich is a Pacific Northwest magazine staff writer. Paul Bannick can be reached at paul.bannick@gmail.com. 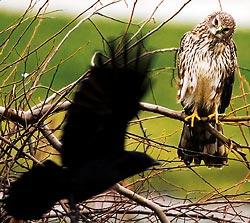 With its flat face and habit of hunting in the early and late hours of the day, the harrier hawk is often mistaken for an owl. It is often seen flying low over Puget Sound wetlands hunting for rodents and even birds. Here, in southwest British Columbia, a crow is harassing its dangerous foe while the hawk seems to be thinking, "Hey buddy, do you realize who I am?" The Sammish Flats, Skagit Valley and Nisqually are all easy places to see this bird. (PAUL BANNICK) 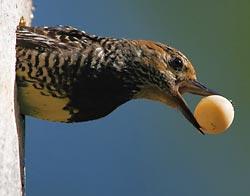 Of the four sapsuckers in the world, three are native to the Pacific Northwest. Each sapsucker species has its own pattern of wells. Sapsuckers drill the wells to lap up the sap but also to eat the insects attracted to it. The Williamson sapsucker pictured here lives in the Cascades where Western larch are part of the forest mix. This bird was photographed in the rare act of removing a failed egg. Following the rule of not intruding on the bird's behavior can sometimes provide the opportunity to observe rare or undocumented action. (PAUL BANNICK) 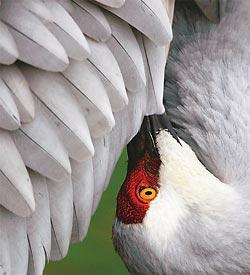 Sandhill cranes are occasional visitors to the Puget Trough on their way to wintering grounds east of the Cascade Mountains. Rather then making a typical long portrait with quite a bit of negative space, photographer Paul Bannick filled the frame to show off the elegance of the bird he found in British Columbia. Bannick has pursued his love of local birds by taking pictures of them in recent years. (PAUL BANNICK) 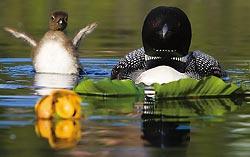 On Alaska's Kenai Peninsula, he was hoping to photograph babies riding on their mothers' backs. But the chicks were too big, so he settled for humorous episodes of a baby trying to climb on the mother's back and her sinking, or appearing to sink, under the weight. (PAUL BANNICK) 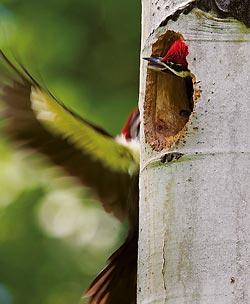 The pileated woodpecker is the largest known woodpecker in North America. This bird requires hundreds of acres of mature old-growth trees for nesting and feeding. Big rectangular holes low in dead trees in Discovery Park leave evidence of its feedings, while its round nest holes are usually higher and less easily located. This photo, taken in Yakima County, shows a young bird anticipating the arrival of his mother with food. (PAUL BANNICK) 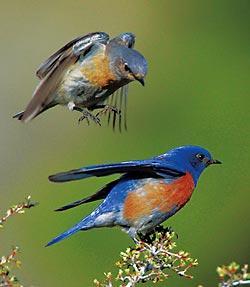 Western bluebirds are more commonly seen in Washington after successful nestbox breeding programs. They require cavities to nest in, so the practice of cutting dead trees has affected bluebirds and many other cavity nesters. This pair of bluebirds, found near Ellensburg, was courting. The female appears to be ambushing the male. (PAUL BANNICK) 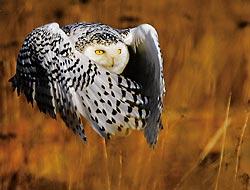 These visitors were found in southwest British Columbia. (PAUL BANNICK) 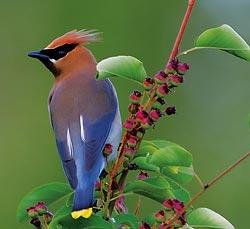 The cedar waxwing is commonly seen feasting on berries such as mountain ash and saskatoon. This bird was photographed at Juanita Bay in Kirkland. (PAUL BANNICK) 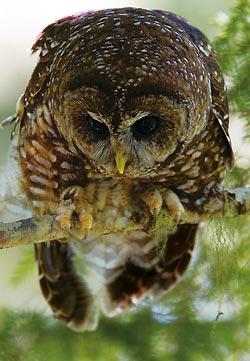 The Northern spotted owl is in great danger of extinction primarily because its old-growth habitat is rapidly disappearing. The birds require this unique habitat for food and breeding. "I wanted to capture a photo that hints at the owl's uncertain future and gives the viewer a more intimate feel of the bird," photographer Paul Bannick says. Here, the owl watches prey on the forest floor near Mount Rainier National Park. (PAUL BANNICK) 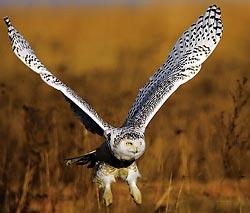 Snowy owls live in arctic regions, but often visit more southerly latitudes in the winter, and are seen in Seattle many winters. (PAUL BANNICK) 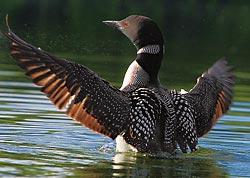 "Some of my earliest wilderness experiences were marked by the thrilling call of the common loon, and as a result it was one of my early photo targets," says Bannick. Because loons are white-whites and black-blacks, it is easy to overexpose the whites. (PAUL BANNICK)

Paul Bannick will make two appearances to show his images and talk about them in September:

"Paul Bannick's Images of Birds with a Focus on Owls and Woodpeckers," Burke Museum, University of Washington campus, 7 p.m., Sept. 13.