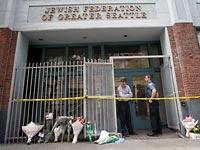 The man accused of barging into the offices of the Jewish Federation of Greater Seattle and killing one woman and wounding five others will be prosecuted on state murder and attempted-murder charges rather than federal hate-crime laws, officials said.

Dan Donohoe, spokesman for the King County Prosecutor's Office, said attorneys would be meeting this week to discuss which specific charges they will file and whether it will become a capital case, which could bring the death penalty or life in prison without parole.

New details of the shootings at the two-story federation offices in Belltown emerged Saturday in court documents and from Seattle Police Chief Gil Kerlikowske, who held a news conference. The chief described pandemonium, with people jumping out of second-floor windows, hiding in closets and diving beneath desks as the gunman fired randomly at workers.

Kerlikowske credited one of the victims, Dayna Klein, who is 17 weeks pregnant, with acting heroically and helping calm the explosive situation.

"She's a hero in my eyes," Kerlikowske said of Klein.

There were 18 women and one man in the offices when the shooter opened fire just after 3 p.m. Friday. The chief said Haq had picked the foundation as his target after conducting a random Internet search for Jewish organizations on his computer.

Haq briefly held one of the victims hostage and told dispatchers, "I want these Jews to get out."

"I just want us to get out of Iraq," Haq reportedly said. "I'm an American too, but I want our people out of Iraq."

Witnesses reportedly heard Haq declare he was an American Muslim. Police have said Haq's statements indicate the shootings were a hate crime.

A law-enforcement source, who is a member of the Seattle Joint Terrorism Task Force and familiar with the investigation, said Haq was not a practicing Muslim.

Kerlikowske said Haq forced his way through a security door behind the 13-year-old niece of one of the shooting victims. Haq had been lingering in the foyer and stuck a handgun in the girl's back when she approached a door that's opened by a keypad. He shoved his way past her after she was buzzed through.

"She could not have kept him out," Kerlikowske said. "She was a hostage."

Haq "then entered the premises and made several statements indicating anger at Jews," according to court documents.

Haq was armed with two handguns, a .40-caliber and .45-caliber, and extra ammunition, police said. He opened fire once inside, shooting several people, including Klein, who was hit in the arm as she attempted to protect her unborn child, Kerlikowske said.

Describing her actions as "heroic," the chief said Klein remained calm throughout the ordeal and dialed 911 even though the shooter ordered her not to. The gunman took the phone from her and began talking to dispatchers, who helped calm him. He surrendered minutes after the shooting began.

Kerlikowske also lauded the two unidentified 911 dispatchers for their courage.

"I was absolutely stunned by the level of calmness and coolness," said Kerlikowske, who said he had reviewed the 911 tapes. "The end result of this situation is the suspect laid down his weapon."

Six women were shot, including 58-year-old Seattle resident Pamela Waechter, who died from her injuries. Other victims were:

• Klein, 37, of Seattle, who was in satisfactory condition early Saturday at Harborview Medical Center with a gunshot wound to her arm.

• Cheryl Stumbo, 43, of Seattle, who was in serious condition at Harborview.

• Carol Goldman, 35, of Seattle, who was shot in the knee. She was in satisfactory condition.

• Layla Bush, 23, of Seattle, who was in serious condition.

• Christina Rexroad, 29, of Everett, who was wounded in the abdomen. She was in serious condition.

Rachel Hynes, the Jewish Education Council associate at the federation, was at her desk in the back of the office when she heard a series of loud pops, like balloons bursting. She heard a scream, but it carried no terror: "It was like a scream of surprise," she said.

At first she thought it might be someone joking around, but she was uncertain enough to grab her purse and flee out the rear door. "I would rather feel foolish on the street," she said.

Almost all of the victims sat in desks in the front hallway area, said foundation vice president Amy Wasser-Simpson.

Hynes said the shooter "just went down the line."

Some other employees started coming out the rear door, and then Hynes saw co-worker Rexroad, who was bleeding from gunshot wounds. Hynes and several others fled to a nearby Starbucks — and ran into eight Seattle police officers on break. Someone yelled there had been a shooting.

"All eight of them jumped up and ran out of the door," Hynes said. "That's why we had police presence so fast."

Several of the workers returned to aid Rexroad, who was woozy and bleeding heavily. Hynes said another worker, Kami Knatt, tried to stop the bleeding and slapped Rexroad to help her stay conscious.

Haq had legally purchased the two semiautomatic handguns from two gun shops in the Tri-Cities area in recent weeks. Kerlikowske also said that Haq — who has an extensive history of driving citations — had been cited by a Seattle officer just minutes before the shootings for driving in a lane reserved for buses. The officer who stopped Haq did not notice anything out of the ordinary, Kerlikowske said.

Wasser-Simpson said the federation staff will gather today to meet with counselors from Jewish Family Services. She said staff members will work in an undisclosed location until they're emotionally ready to return to the Belltown offices.

"Professionals are telling us we do want go to back to the location," she said. "It's kind of like when you fall off a horse you want to get back on as soon as possible."

Wasser-Simpson said the organization received a $100,000 grant from the Department of Homeland Security in the past year to increase security at its educational facilities. Those upgrades are under way. None of the money was used for security at the headquarters, she said.

The Seattle shooting prompted calls among dozens of other federation offices, synagogues and Jewish community centers across the nation.

Barry Swartz, vice president of Federation Services for the United Jewish Communities, said he had not heard of any specific threats in the past week during the intensified fighting in Lebanon.

"But a number of our communities contacted their local law enforcement last night and today, after they heard about the shooting."

In addition, federation offices are going to review policies and practices in the next days to see what else can be done to prevent armed strangers from such attacks.

Muslims reach out: Temple B'nai Torah congregation member Lynda Matthias, left, walks to the temple with Farida Hakim, middle, who came with a friend (who declined to be identified) to leave flowers in honor of the shooting victims. The shooting is "all the more reason that we work together for peace and justice," Hakim said. (ALAN BERNER / THE SEATTLE TIMES)

The family of Naveed Haq released this statement through Kennewick attorney Larry Stephenson:

"We are shocked and devastated with this tragic event. Our hearts and condolences go to the family of the deceased lady. Our deepest sympathies go to those who have been injured and we pray for their speedy recovery. We could not have imagined for a moment that our son would do this senseless act. This is utterly contrary to our beliefs and Islamic values. We have always believed and practiced in fostering love, peace and harmony with everyone, irrespective of religion, race and ethnicity."

An interfaith "Service of Hope" is set for 7 p.m. Tuesday night at the offices of the Jewish Federation of Greater Seattle, 2031 Third Ave., to remember the victims of Friday's shootings. The entire community is invited to attend and to offer prayers.