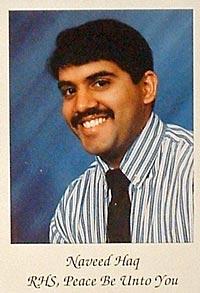 When Naveed Haq graduated from Richland High School in 1994, his yearbook photo revealed a big smile, friendly eyes, buttoned-down collar and smart tie. "Peace Be Unto You" were the words that appeared with his name and picture. Other students said that image and message fit the young man.

"He was a pretty calm, collected, happy guy," said Talon Wiser, a Richland man who had English classes with Haq. "I've never seen the guy get mad at anybody."

Twelve years later, Haq left a darker impression. In March of this year, he climbed up on a raised coin fountain inside Kennewick's Columbia Center mall and began "catcalling" women at the makeup counter at the nearby Macy's store, said Lisa Beaton, a Kennewick city prosecutor. When young women walked by his perch, Haq unzipped his pants and allegedly flashed his penis at them, Beaton said.

Haq, 30, was charged with lewd conduct — a gross misdemeanor — and was scheduled to stand trial in Benton County District Court on Thursday. But the trial was postponed, said Haq's attorney, Larry Stephenson, because Stephenson had to try a different case in another courtroom.

In high school, Haq struck classmates as pretty middle of the road: not outgoing but not reclusive, smart but not brilliant, small of stature and not terribly athletic. Despite his family's long-standing involvement in the Muslim faith — his father helped found Richland's Islamic Center in 1981 — Haq didn't make a show of his religion.

"He was never up front about his faith or religion," said Andres Atencio, who has known Haq since sixth grade.

But on Friday, a man identified by police as Haq walked into the Jewish Federation building in Seattle and, according to eyewitnesses, said: "I am a Muslim American. I am angry at Israel."

Then he opened fire. When he was finished shooting, six women were wounded. One later died.

Many details of Haq's life — and his possible spiral in recent months and maybe even years — were not known Friday night. Stephenson said he doesn't believe Haq is married or has children. Asked what Haq did for a living, Stephenson said, "I don't think he was really working right now."

Haq's parents live in Pasco, in a new development of custom-built, riverfront homes worth a half-million dollars and up. The family moved in less than three years ago, said Maureen Hales, a neighbor. She said Haq's parents and brother, Hasan, were "quite enjoyable." The two families exchanged food, and Hales said she watches the Haqs' house when they're away.

A man who answered the door at the Haq family's house Friday night said the house was a federal crime scene. He would not identify himself and said the family was not in a position to talk.

Stephenson called Haq's parents Friday night. "I talked to his father, and his mother is crying, and they don't know what is going on. They are very, very shook up. They haven't been able to reach their son."

In recent years, Haq lived in Richland and Everett. When a Seattle Times reporter went to Haq's old apartment in Everett on Friday night, federal agents appeared to interview a former roommate.

Haq lived in the apartment building, on Everett's Nassau Street, until leaving abruptly about two weeks ago, tenant Chris Richey said. The landlady told Richey that Haq was heading to Pakistan.

Haq often talked about guns, politics and his dislike of President Bush, Richey said. Haq told Richey he owned a .45-caliber handgun, which he kept locked in a safe-deposit box.

A friend of Haq's in Everett, who spoke on condition he not be named, said Friday night that Haq was on medication for bipolar disorder and was frustrated by his inability to find a job or a girlfriend. Haq displayed a streak of anti-Semitism, sometimes making offhand comments about Jews.

"He was a loner," the friend said. "I was probably one of his only friends."

Although Haq made a point of announcing his Muslim faith before opening fire Friday, he had told the friend he was not a practicing Muslim because he was turned off by the religion's strict gender divisions.

In school, Haq had thick, neat hair. But when he showed up in court on the lewd-conduct case, he had a cleanly shaved head, said Beaton, the prosecutor.

Haq did not have a serious criminal record, she said.

In recent years, Haq found himself in a variety of courts, mostly on small matters: traffic violations, such as speeding and negligent driving, and a dispute over unemployment benefits.

In 2004, two days after Christmas, Haq filed an appeal challenging an administrative law judge's decision that denied Haq the benefits, according to records and the assistant attorney general who handled the case.

But the case lay dormant for more than a year, and wound up being dismissed in February for want of prosecution.