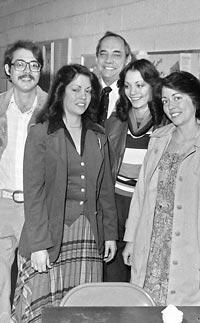 Paul Cantwell, center, and four of his children, left to right, Danny, Carey, Kellie and Maria, greeted voters at a polling place on Election Day 1979, when Paul Cantwell was running for mayor of Indianapolis. He lost in a landslide. ( THE INDIANAPOLIS STAR)
By Alicia Mundy
Seattle Times Washington bureau

One of a series of stories exploring the lives and careers of Washington state's candidates for U.S. Senate.

For years, Sen. Maria Cantwell has pointed to one man as the key influence on her political life: her late father, Paul Cantwell.

He was a Democratic county commissioner, a city-county councilman and a one-term state legislator, the patriarch of a prominent political family in Indianapolis.

His daughter remembers as a child sitting at the kitchen table with her dad as union officials, laborers, neighbors and higher-ranking politicos dropped by to talk.

"People came to ask my dad what to do," said Cantwell, who is running for re-election against Republican Mike McGavick. Since she entered Democratic politics, she said, she has tried to emulate her dad's ability to fix "the problems of the little guy."

As Cantwell explains it, her father had a clear sense of who's right and who's wrong: Democrats, the defenders of the vulnerable and less fortunate, were on one side. Republicans and their powerful allies were on the other.

In the Senate, that philosophy has played out in Cantwell's battle to keep the former energy giant Enron from collecting millions of dollars in fees from Snohomish County utility customers and in her attacks on gas-price gouging.

But Paul Cantwell's embrace of often controversial, populist issues cost him professionally and personally. His family watched him lose votes and stature through cantankerous remarks and frontal attacks on his enemies.

When it came her turn in politics, his daughter took a less controversial, more cautious approach to public life.

"She was daddy's girl"

Paul Cantwell was a masonry contractor and a proud union advocate. But his real love surfaced at age 15, when he became a political volunteer.

His mother was active in Indianapolis politics and once wrote of keeping her children out of school on Election Day. A generation later, Paul Cantwell did the same with his five children, whom he enlisted to help canvass for recalcitrant voters.

A baseball fanatic, he could rattle off random RBI stats as freely as he could identify swing voters by block in Marion County, Ind.

Today, Maria Cantwell, 47, keeps the Mariners lineup on the wall of her Senate office and can spit out the names and stats of the Cincinnati Reds' World Series teams.

"There were five of us kids, but she was daddy's girl," said her younger sister, Carey Clay, who lives in Snohomish County.

Like her dad, Maria Cantwell has developed a reputation as driven and, at times, stubborn.

"That was Paul," said former Congressman Andy Jacobs Jr., a 15-term Democrat from Indianapolis who hired Paul Cantwell as his administrative assistant on Capitol Hill in 1965.

Cantwell moved his family to D.C. for a year. On weekends, Maria and her sisters visited their father's congressional office, where the girls' Mary Janes squeaked on the polished corridor floors.

The family returned to Indiana and Cantwell took his seat as county commissioner in 1966.

One night in the 1960s, Maria woke up to hear Massachusetts Sen. Ted Kennedy laughing downstairs in the living room.

And when Robert Kennedy, running for president, delivered his famous speech in Indianapolis the night of Martin Luther King's assassination in 1968, Paul Cantwell was standing just behind him in the TV clips.

In Indianapolis, Maria Cantwell spent eight years at St. Catherine's, an inner-city Catholic school. Her teachers were the Sisters of Providence, nuns known for their community service and a desire to change the world.

Their lessons dovetailed with her father's desire to fix people's problems.

"I guess taking care of people is something they just helped you absorb," Maria Cantwell said. "If you have talent, you're supposed to use it for others who may not be as lucky."

Paul Cantwell won election to the Indianapolis city-county council after the 1970 merger of Marion County and the city. But the consolidation left Democrats in the minority, and Paul Cantwell became frustrated.

"Paul came across as a feisty infighter, wily, and willing, as my county chairman once said of him, to say ridiculous things in order to get some press," said William Hudnut, the Republican mayor of Indianapolis for 16 years.

Hudnut, now a think-tank leader in D.C., said Paul Cantwell had an easy informality about him that seemed to say "we're all bozos on the same bus."

In 1965, at an inaugural ball in D.C. for President Johnson, Paul Cantwell broke up the speaker of the House's interminable speech about World War II by jumping on a table and yelling, "Boo, Hitler!," Jacobs said.

"Yes, dad was a gregarious, outgoing guy," said Maria Cantwell, who is somewhat reserved in public.

When she was elected to Congress in 1992, she was welcomed back in Indianapolis at a reception her father threw at a saloon called The Working Man's Friend.

After the party, Jacobs recalled some of the guests joking about the contrast between the wild, outspoken father and the formal, studied daughter.

Paul Cantwell turned bitter about Indianapolis politics in the late 1970s after the arrest of his older son on murder charges.

In November 1977, a 26-year-old woman was found strangled and stabbed with a fork in an apartment she had rented the day before from Maria Cantwell's mother, Rose.

Danny Cantwell, then 21, was charged with the crime. Maria was 19 and in college.

Paul Cantwell insisted the charges were "dirty politics," an attempt at payback against him for investigating police corruption in the mid-1970s. He and Rose Cantwell, who were divorced by then, told reporters their son was emotionally troubled, but he was no murderer.

"Danny was an easy target," Robert Hammerle, his public defender, said in a recent interview. Hammerle said, though, that he never saw any evidence of political payback behind the case and refused Paul's demand to use that argument in Danny's defense.

With the trial still pending, Paul Cantwell resigned his city-county council seat in 1979 to run for mayor, setting a record for the worst defeat by a Democrat in 150 years in Indianapolis, according to The Indianapolis Star.

In November 1980, after a five-day trial, the jury took 20 minutes to acquit Danny Cantwell.

Paul moved out of the limelight and into backroom politics. In 1983, he gave an interview to The Indianapolis Star, again insisting his son's arrest had been politically motivated. The killing remains unsolved.

None of the Cantwells, including Maria, would discuss the case or its impact on them.

In 1981, she became the first in her family to earn a college degree and, the year after, helped a Cincinnati politician named Jerry Springer in his failed run for governor of Ohio.

In 1992, the year Maria Cantwell won her congressional seat in the 1st District, her father made his political comeback by winning a seat in the Indiana state Legislature. He and his daughter were tossed out of office in the 1994 Republican landslide.

When Paul Cantwell succumbed to lung cancer in 1997, at 69, "Maria was hit the hardest," her sister Carey Clay said.

The local Catholic priest came to Paul Cantwell's home in Indianapolis to give him the last rites. Carey and Maria, rosary beads in hand, prayed near their father's bed as the priest leaned down and blessed him.

The priest then intoned the ultimate absolution: "Paul, you've been a good Democrat." 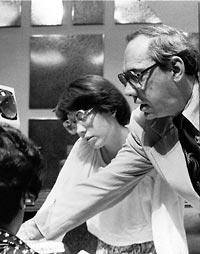