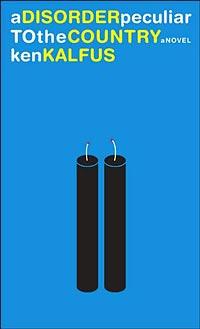 By Mark Lindquist
Special to The Seattle Times

Ken Kalfus, author of "The Commissariat of Enlightenment," a 2003 New York Times Notable Book, has written a dark satire of close-ups with "A Disorder Peculiar to the Country."

On Sept. 11, 2001, Joyce Harriman, in the throes of an exceptionally bitter divorce, watches the Twin Towers fall with a horror we all remember, but her gloom is interrupted by an emotion foreign to the rest of us that day: "Joyce felt something erupt inside her, something warm, very much like, yes it was, a pang of pleasure."

Her husband, she suddenly remembers, works in one of the towers.

But Marshall survives, and he, too, has a moment of elation that day. He mistakenly believes Joyce is on United Flight 93, the Boeing 757 passengers courageously attempted to take back from the terrorists before it crashed into a field en route to Washington D.C.

Marshall and Joyce are equally petty, self-involved to a degree that would make a Hollywood star blush, and hateful. "She wanted to ruin him, not only financially, but personally, and not just for now, but forever." As for Marshall, "How he hated her. He could have written sonnets of hatred, made vows on his hatred, performed daring, heroic feats of physical labor to prove his hatred."

Their vitriolic mind games make the battle of the couple in "War of the Roses" seem amiable and sporting by comparison. The obvious collateral damage suffered by the Harriman's children gives them almost no pause.

Nobody is safe from the crossfire. At his future brother-in-law's bachelor party, Marshall subjects the Jewish guests to an anti-Semitic tirade about our country's commitment to Israel, scapegoating Jews in an ill-conceived flanking maneuver designed to eventually punish Joyce.

In contrast with Jay McInerney's "A Good Life," where self-centered New Yorkers, at least some of them, are uplifted by a sense of perspective, community, and humanity they find in the enormous losses of 9/11, Marshall and Joyce immediately fall back into their private skirmishes.

Kalfus is an impressively penetrating and precise novelist. Despite the repellant nature of Joyce and Marshall, Kalfus kept me turning the pages by the forceful grace of his writing and insights. I do not know how he understands these two psychos so well, but he certainly does. He can even, at moments, dredge up some humor, but the situation is too relentlessly grim for many laughs.

At his lowest point, Marshall buys dynamite and constructs a bomb and straps it across his chest with the intent of blowing up the apartment, wife and children inside. The bomb does not work. Marshall failed to follow the instructions he found on the Internet, which were in Arabic.

Kalfus' attempt to parallel the personal and the universal, the Harriman's war with each other and our country's war with the terrorists, though mercifully unforced, is less persuasive than his character studies. Perhaps that's because almost anything analogous pales next to the evil presented by a group of brainwashed halfwits, who think mass murder will be rewarded by the pleasure of deflowering 70 virgins in the afterlife.

After 250 pages of excruciating close-ups of human pockmarks, Kalfus pulls back the camera to reveal a dreamy and surreal alternate universe where humanity shines, sort of. Though artfully done, the 11th-hour shift in perspective cannot change this tragedy into a comedy.