A sunset at Mount Pilchuck is one of the many charms that draws nature lovers to the area. (MIKE SIEGEL / THE SEATTLE TIMES, 2003)
By Brian Alexander
Times Snohomish County Bureau

It's not enough just to say the hikes near Mount Pilchuck and the old Monte Cristo mining town are popular. For the past 100 years, the entire area along the Mountain Loop Highway from Verlot to Monte Cristo has been one of the most popular recreation centers in Snohomish County.

It regularly drew Mary Cooper and her daughter Susanna Stodden, the two women shot to death last week along the trail to Pinnacle Lake.

It even drew family survivors of the two women to reclaim, as one colleague explained, their passion for the region's natural beauty.

As far as visitors go, it's one of the most popular spots in Snohomish County, said David Cameron, a local historian. The Verlot Public Service Center, he said, gets more than 30,000 visitors a year.

The area draws outdoor enthusiasts mostly because of its location but also because of the multitude of day hikes in the area. Many hikes start along or near the Mountain Loop Highway, the main paved road that follows the South Fork of the Stillaguamish River past Mount Pilchuck.

There's also something about the mountain that is attractive, said David Dilgard, a history specialist with the Everett Public Library's Northwest Room.

From Everett and Marysville, Mount Pilchuck appears to be the largest and most prominent mountain in the Cascades. But the mile-high peak is far from the tallest; it's only because of its location that it appears so large, Dilgard said.

Whether it's partly because of the deceptive size or the rave reviews of the trails in hiking guides, people flock to the area near Mount Pilchuck and Monte Cristo.

The area has enough campsites for hundreds of people. And those people can choose from dozens of trails of varying lengths and levels of difficulty.

Many of the hikes start on the valley floor and climb toward Mount Pilchuck or the old Monte Cristo mining district.

But the hike where the bodies of Seattle residents Cooper and Stodden were found last week begins about six miles up a road built for logging.

The hike to Pinnacle Lake actually begins at Bear Lake, a 0.3-mile hike from the parking lot.

Though the walk to Bear Lake is relatively easy, Pinnacle Lake is a significant climb. The hike begins with a 1,100-foot climb through dense woods, said Neil Bresheare, a member of the Mountaineers who organizes climbs in that area.

Once the trail levels off, it's a fairly simple walk to the lake along a ridge and through a meadow, Bresheare said. The lake itself is fairly narrow and sinks into a steep basin on the side of Mount Pilchuck, according to the book "Hiking Snohomish County" by Ken Wilcox. There are big boulders at the lake that make good places to sit and enjoy the surroundings.

The Pinnacle Lake hike is popular, but it's just one among many popular hikes along the Mountain Loop. Farther west on the highway, the Big Four Ice Caves attract many hikers each year, as do the relics at Monte Cristo farther east.

The fire lookout at the summit of Mount Pilchuck, which is no longer staffed as a lookout, also draws a crowd. For most of the past century, hikers and other outdoors types have been the staple of the Verlot and Monte Cristo areas.

Though the wilderness surrounding Mount Pilchuck was first used for mining, much of its history has been related to recreation, which began in the area in the 1890s, years before there was a Mountain Loop Highway.

At first, residents from the west side of the county would board the trains that had dropped off their loads of gold and silver ore in Everett and ride them to Monte Cristo, where they could spend the weekend at one of a number of inns, Cameron said.

The "excursion trains" started to take the place of mining, which became increasingly unprofitable due to economic panics in 1893 and 1907, he said. Visitors would hike, fish and enjoy the wilderness away from their homes in Everett and elsewhere.

By the late 1920s, mining in the river basin of the South Fork of the Stillaguamish was mostly dead, but logging and recreation picked up where the mining left off.

As mining declined, there was less need for a railway along the South Fork, but pressure to build a road began to mount. In 1936, a road from Granite Falls to Barlow Pass, built on top of the Monte Cristo railroad grade, was completed, according to the Forest Service.

Construction of the road brought more people to the area to enjoy what it has to offer, but they found that there are dangers associated with hiking some trails. Thick brush that conceals drop-offs and slick ice are the causes of accidents each year in the Mount Pilchuck area.

The ice caves also are dangerous, as the tons of snow which seem suspended in midair can come crashing down on an unsuspecting spelunker.

Still, for the people who have a strong connection to that area, it's shocking to hear that two people were slain on the Pinnacle Lake Trail.

"Oh, man, did I get a sick feeling in the pit of my stomach on that one," said Cameron, who lives in Index. "When a pair of women can't go out hiking alone without being concerned about safety, that's a sorry statement about our society."

Cameron said he used to be a seasonal employee working out of Verlot when Monte Cristo was its own ranger district. He remembers doing patrols, checking cars and performing other tasks to make sure hikers and others were safe.

But ranger-station budgets are smaller these days, and there are fewer people to patrol the roads and the trails. Cameron said he hopes there will be a quick resolution to what happened in the woods July 11 that resulted in the shooting deaths of the two women. He said he'll probably do his hiking with a "higher level of paranoia" now, but it won't stop him from getting out there.

One terrible event like this shouldn't ruin the area and the experience, he said.

A sign points the way to the Pinnacle Lake trail, along which Mary Cooper and her daughter Susanna Stodden were killed. (KEN LAMBERT / THE SEATTLE TIMES)

The Big Four Ice Caves are one of the attractions in the Mountain Loop area, yet they can unload tons of snow on unsuspecting hikers. (ELLEN M. BANNER / THE SEATTLE TIMES, 1999) 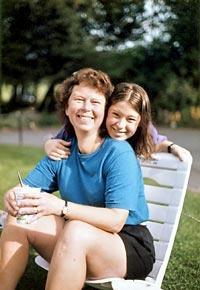