The designs are created during the weaving process, and traditional techniques dictate what patterns each weaver can produce. (DAVID MCLANAHAN)
By Gayle Clemans
Special to The Seattle Times

A collection of intricately woven, contemporary textiles has traveled from Sarawak — a Malaysian region in northwest Borneo — bearing endangered tradition within its fibers. On view (and for sale) at Glenn Richards, a store that specializes in Asian furnishings and antiques, the beautiful, complex patterns are embedded with cultural meanings about integrity, prosperity, spirituality and ancestry.

Edric Ong, an architect, artist and activist from Sarawak, has brought the fabrics to Seattle as part of his ongoing efforts to support the continued production of these textiles and the cultural legacy they represent. Ong collects them, designs some himself and promotes the work of Sarawak weavers. He believes that the weavers' practices and products are integral to the artistic heritage of Sarawak, and Malaysia at large, a heritage that is threatened by increasing industrialization and globalization.

Ong has described the traditional weaver as "as a designer [for her creative expressions], a chemist [for the dyes], a historian [for recording events and legends] and poet [for the poems composed to enhance each masterpiece]."

The weaving techniques themselves are taught and practiced within a traditional system in which a weaver's skill, training and status dictate which designs she can produce. Knowing about the technique can render you speechless when examining the complicated designs: the knotted strands are hand-dyed and the elaborate designs are composed while weaving, without reference to pre-existing diagrams or drawings.

The results are stunning. Some of the pieces are gauzy and flowing, and reveal contemporary designs; others are Pua Kumbu, the highly traditional, densely woven spiritual cloths that have been created for centuries. Pua Kumbu are used ritually as vehicles for the transmission of the culture and history of the Iban people, the largest ethnic group in Sarawak. The carefully balanced, elaborate symbols and patterns carry forward age-old legends and beliefs.

Traditionally, the classic patterns often arose from dreams and the Iban people's belief that the soul moves out of the body during sleep, encountering spirits and receiving inspiration for designs. Aptly, the exhibition of these contemporary Pua Kumbu textiles in Seattle is titled "Dream Weavers of Borneo."

Laurie Fairman, who co-owns Glenn Richards with her husband, John Fairman, points out that Edric Ong is "something of a national treasure" because of his dedication to cultural preservation.

Ong's presence in Seattle, along with his collection of textiles, has prompted a series of events related to the indigenous cultures of Malaysia and Indonesia.

At Honeychurch Antiques, the Fairmans' other venue, John Fairman has assembled a small but stunning exhibition of Indonesian art, including ceremonial daggers, masks and totem pieces. The elegantly powerful objects have been culled from national and local dealers and collectors, and are well worth seeing. 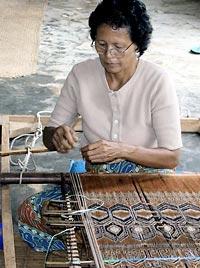 Master weaver Bangie ak Embol's textile, on display in the "Dream Weavers of Borneo" exhibit at Glenn Richards, was woven on a backstrap loom in Sarawak. (DAVID MCLANAHAN)