Former Mariner Rickey Henderson, left, was one of the few players in major-league history to throw left-handed and hit right.

The first known switch-hitter in baseball history is considered to be Bob Ferguson, who on June 14, 1870, came to the plate left-handed for the first time in his career while playing for the Brooklyn Atlantics against the Cincinnati Red Stockings. Ferguson's motivation apparently was to avoid hitting the ball to Cincinnati's rangy shortstop, George Wright. Ferguson singled in that historic at-bat and drove in the tying run, and later scored the winning run as the Atlantics ended the Red Stockings' two-year winning streak. Ferguson also happened to have the greatest nickname in the history of baseball: "Death to Flying Things," a tribute to his ball-hawking skills in a gloveless era.

The first switch-hitter inducted into the Hall of Fame was infielder Frankie Frisch, "The Fordham Flash," who entered in 1947 with the highest career average (.316) in history among switch-hitters. Eight others have followed: Max Carey (1961), Dave Bancroft (1971), Cool Papa Bell (1974), Mickey Mantle (1974), Red Schoendienst (1989), George Davis (1998), Ozzie Smith (2002) and Eddie Murray (2003). Hall of Famer Miller Huggins was a switch-hitter, but he's in Cooperstown for managing the Yankees, not for his .265 career average. Conspicuously absent from the list is the all-time hits leader, Pete Rose.

OK, technically, three other switch-hitters are in the Hall of Fame, but they're pitchers — Mordecai "Three Finger" Brown, Early Wynn and Robin Roberts. Other switch-hitting pitchers include Pirates' flame-thrower Bob Veale, and the current unrelated Zambranos — Carlos of the Cubs, and Victor of the Mets. Then there's Vida Blue, answer to the ever-popular trivia question: Name the last switch-hitter to be named American League MVP.

Enough about switch-hitters. The rarest talent in baseball is to be a switch-thrower. The first person to pitch righty and lefty in the same game was Louisville's Tony Mullane in 1882, against Baltimore. In modern times, the ambidextrous pioneer was Greg Harris of the Montreal Expos, who in September 1995 threw an inning of relief against the Reds, pitching from both sides. Harris, wearing a reversible six-finger glove now displayed in the Hall of Fame, pitched right-handed to two batters and lefty to two others.

Rickey Henderson's career didn't go badly; he holds the career record for stolen bases (1,406) and runs (2,295), and is one of 26 players in history with at least 3,000 hits (3,055). But imagine what Henderson could have done as a switch-hitter. He is one of a handful of players in major-league history to throw left and hit right — making him two steps farther from first base. In his autobiography, "Off Base: Confessions of a Thief," written with John Shea, Henderson said he started hitting right-handed as a youngster to emulate his friends, and stuck with it. Rickey contemplated becoming a switch-hitter in the minor leagues, but according to the book, "They told me to forget it. Charlie Finley didn't want me switching anything in my game. My problem was simple: I hit too well as a right-hander for them to start experimenting with switch-hitting."

The Los Angeles Dodgers in 1965 had the distinction of fielding the only all-switch-hitting infield in history, with Wes Parker at first base, Jim Lefebvre at second, Maury Wills at shortstop and Jim Gilliam at third.

Another team that thrived on switch-hitting was Whitey Herzog's St. Louis Cardinals in the 1980s, which made maximum effect of the speed game on the Busch Stadium Astroturf. Their pennant-winning clubs of 1985 and '87 were filled with swift switch-hitters, including Ozzie Smith, Willie McGee, Terry Pendleton, Vince Coleman and Tommy Herr, with Jose Oquendo off the bench.

Colorado's Aaron Miles, on April 14, 2005, became the fifth player in history to hit his first two career home runs from different sides of the plate in the same game, according to research by David Vincent. The others to accomplish the feat were Johnny Lucadello of the St. Louis Browns in 1940, U.L. Washington of the Kansas City Royals in 1979, Bret Barberie of the Montreal Expos in 1991, and Brian Simmons of the Chicago White Sox in 1998. Lucadello, by the way, had just three more home runs in his career.

In a two-day span in 2003, two unlikely players made switch-hitting power history. On July 29, against the Texas Rangers, Boston third baseman Bill Mueller became the first player to hit grand slams from both sides of the plate in the same game. Mueller, hardly known as a slugger, was hitting eighth in the Red Sox lineup. The next day, White Sox shortstop Jose Valentin, mired in a 5-for-36 slump, blasted three homers against Kansas City, making him the first switch-hitter ever to have three-homer games in both the American and National Leagues.

An even more unlikely switch-hitting performance came on June 8, 1989, when Philadelphia's light-hitting shortstop, Steve Jeltz, homered from both sides of the plate against Pittsburgh. Jeltz, a career .210 hitter, had only five homers in his entire career in 1,749 at-bats.

Asked after the game against the Pirates if he had ever heard of Walter Mitty, the fictional character known for dreaming of performing amazing feats beyond his ability, Jeltz replied, "Nah, I've never heard of him. He's before my time. Who'd he play for?"

Against Toronto, on April 23, 2000, Bernie Williams and Jorge Posada of the Yankees became the first (and so far, only) teammates to homer from both sides of the plate in the same game. The king of that feat, however, is Hall of Famer Eddie Murray, who did it 11 times, one more than Mickey Mantle, Ken Caminiti and Chili Davis. Mantle, however, had done it 10 times before anyone else in history had done it three times.

The first player to homer from both sides in one game was the Philadelphia A's Wally Schang in 1916. Carlos Baerga of Cleveland holds the distinction of homering from both sides of the plate in the same inning in 1993, a feat matched by the Cubs' Mark Bellhorn in 2002.

Garry Templeton in 1979 became the first switch-hitter with 100 hits from each side of the plate in a season. 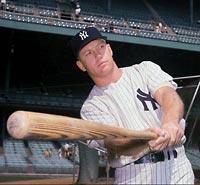 Mickey Mantle, a Hall of Famer with the New York Yankees, is among the most famous switch-hitters in history. Mantle homered from both sides of the plate in the same game 10 times in his career. ( AP, 1961)