MARTINDALE, Texas — Carlton Carl was a young man, fresh out of graduate school and just starting his political career as an aide to the late Democratic Gov. Preston Smith, when he began exploring little towns in central Texas.

He had grown up in big-city Houston, but was fascinated by small-town life and wondered what it would be like to get really involved in it. Better yet, what if he could own a town?

Maybe one such as this little place, where everyone knows everyone, where the big annual event is the Martindale Fun Fest in April. A place where July Fourth is celebrated with a parade of men riding their power lawn mowers down Main Street, followed by a community covered-dish picnic on the riverfront.

Today, Carl is a 60-year-old liberal Washington lobbyist whose dream has come true. He owns almost all of Main Street in Martindale, population about 950.

He found it — of course — on the Internet, and he bought it last year with the proceeds from the sale of his 900-square-foot Capitol Hill row house. He does not want to say how much the house sold for, but the sale financed most of the purchase.

Carl bought 36,000 square feet of dilapidated buildings, 16 seed silos, a seed elevator and 300 feet of overgrown frontage along the San Marcos River, hoping he can revive the 151-year-old town.

"I have more vaults than working toilets," Carl says as he leads a tour of what was once the cotton capital of central Texas. He has four vaults — two without doors — and three toilets, only one of which works, in the buildings he owns.

Right now, most of downtown Martindale looks like an abandoned Western movie set — which, in a way, it is. Portions of Clint Eastwood's "A Perfect World," Richard Linklater's "The Newton Boys" and the 2003 remake of "The Texas Chainsaw Massacre" were filmed here.

Carl's buildings once housed a bank, several dry-goods stores, a warehouse, a small restaurant and what used to be the center of life here: a cottonseed weigh station. That was in the days when Martindale produced a majority of the state's hybrid seed corn and when cottonseed, used to make margarine and cooking oil, was one of the biggest cash crops in Texas.

But central Texas cotton farms began to disappear in the middle of the past century. The schools closed; the downtown merchants and businesses left; people moved away. Martindale's children now attend San Marcos public schools, while residents work, shop, bank, eat, launder their clothes, go to movies or see the doctor in San Marcos, Lockhart or Austin.

Carl hopes to change that, at least a little bit. He envisions artists' lofts and studios in the 19-foot-tall silos, an art gallery and a few boutiques. He's sure a small but full-fledged grocery store would work.

But first he must finish meeting the town's residents to get a feel for what they want. "A good washateria," a cafe and a grocery store seem to be on top of many wish lists.

Next, Carl needs to gauge what the mayor and City Council will support. Then he must turn his lobbying skills to pitching Martindale so he can lure the kind of income-producing, tourist-attracting businesses that will help finance the restoration of Main Street.

"There's hundreds of great little towns in central Texas, and half of them are dying or dead," Carl said. "I want to make Martindale a more viable community again." 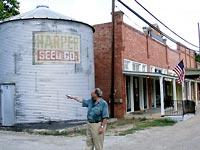 Lobbyist Carlton Carl gives a tour of his recent acquisition: most of Main Street in Martindale, Texas. (SYLVIA MORENO / THE WASHINGTON POST)