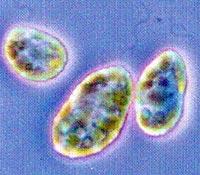 Heterosigma, a type of algae
By Ross Anderson
Special to The Seattle Times

As if Puget Sound salmon didn't have enough problems already, a deadly plankton "bloom" has killed thousands of fish around the Strait of Juan de Fuca, and has threatened to sweep down Puget Sound.

Scientists from Port Angeles to Seattle this week are nervously tracking a biological explosion of Heterosigma, a microscopic plankton that has multiplied to such numbers that last week they were easily visible from the air, long streaks of rust brown on the surface of the strait.

The outbreak eased a bit Monday, thanks to cooling weather and Sunday-night winds in the strait.

"But it isn't over until it's over," warned Jack Rensel, a scientist working on contract with state and federal officials to monitor the problem.

Over the past week, concentrations have been detected from the Strait of Georgia to Port Angeles Harbor, with smaller numbers in North Puget Sound. And thousands of fish, mostly in net pens, were killed at a fish farm on the shore of Cypress Island near Anacortes.

The bloom invaded with little or no warning, said Kevin Bright, a biologist with American Gold Seafoods in Anacortes. It also killed some wild salmon, especially juveniles, which were washing up on the beaches around Cypress Island, Bright said.

"Fish farms are the canary in the coal mine," he said. "Wild fish die as well, but they're more likely to sink or be scavenged by birds and seals."

Over the weekend, smaller concentrations of Heterosigma were detected around Port Townsend and in northern Puget Sound, and scientists feared that extreme tides and fresh water flowing out of the Fraser River in British Columbia could help wash the killer bloom around the corner into central Puget Sound.

Heterosigma is a single-celled organism, typically about 1/1000-inch wide. Seen through a microscope, it is oval-shaped, a mottled amber color. It also is equipped with a pair of flagella, hairlike appendages, that propel it through the water.

In the spring, the cells rise from ocean sediments and swim to the surface, where they gather nutrients and sunlight, much like a garden plant.

The organism is not toxic to humans and normally poses no hazard to fish and other sea life, scientists say. But occasionally, when summer weather arrives earlier than usual, Heterosigma goes crazy.

It multiplies at a phenomenal rate until it reaches concentrations that kill fish — especially salmon and other fish that are confined to net pens and wild fish that feed in shallow water such as river mouths and long inlets.

The outbreaks appear to be completely natural, not caused by pollution, Rensel says.

Heterosigma blooms have been observed around Puget Sound for at least 40 years. There was a large bloom around Lummi Island in the late 1960s, and there were fish kills in Puget Sound in 1989, 1991 and 1997.

How it kills is not fully understood. But Rensel says recent research has found that it produces hydrogen peroxide that affects gills of fish and shuts down their respiration.

Rensel and other scientists were not completely surprised by this month's outbreak. Conditions were ideal: warm, calm weather and a strong freshwater runoff from Northwest rivers, especially the Fraser.

Those conditions lead to "stratification," which means there are plenty of ocean nutrients for food with a layer of less-salty water at the surface, which breeds microscopic plankton. Cloudy, windy weather helps to mix the water and break up the blooms.

Because fish in net pens are especially vulnerable, fish farmers constantly watch the water, Rensel said. "They learn how to spot these blooms from the air," he said.

Still, scientists and fish farmers have advocated sophisticated warning devices, such as strategically located buoys to detect the harmful blooms before they become easily visible — and deadly.

The ocean is home

to thousands of species of phytoplankton: microscopic plants that drift with the currents and multiply rapidly in the spring and summer. These tiny organisms form the basis of the marine food chain, and their photosynthesis produces much of the world's oxygen. But a few species, including some common to local waters, can produce toxins that can kill sea life and even people who consume affected shellfish. For unknown reasons, West Coast marine toxins are particularly potent.

Heterosigma is a golden-brown type of algae, harmless in small numbers but lethal to fish during heavy summertime blooms such as those occurring now around the Strait of Juan de Fuca. Because the algae stay close to the surface, they pose a particular hazard to fish in floating net pens.

Paralytic shellfish poison (PSP) is produced by the microscopic Alexandrium catenella, a tiny, single-cell dinoflagellate. It's similar to Heterosigma, but forms chains. These are sometimes consumed by shellfish, and in large concentrations cause PSP outbreaks. Commercially grown shellfish are tested for this, however, and problems in Washington are extremely rare.

Domoic-acid poisoning is similar to PSP but is caused by even smaller diatoms called Pseudo-nitzschia. During serious blooms, the organisms are consumed by mussels, clams and other shellfish, which concentrate the toxins. Some can hold enough poison that eating just one or two shellfish could kill a normal adult.