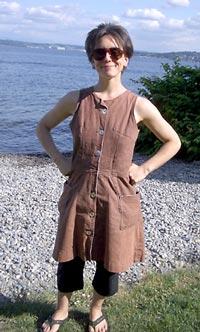 Alex Martin is about to change her clothes. Not a big deal for most of us — some of us do it several times a day. But for this local choreographer, the occasion is momentous. Because Alex Martin has been wearing the same dress every day for the last year.

Part performance art, part personal challenge, part political statement, Martin donned what she calls the "little brown dress" on July 7, 2005, and will hang it up for good this evening (not coincidentally her 30th birthday) after a commemorative public event.

On her Web site (www.littlebrowndress.com), Martin summarizes the project in her typically no-nonsense style: "So, here's the deal — I made this dress and I'm wearing it every day for a year. I'll throw snowballs in it (wearing additional clothing layers in cold weather for health and safety), garden in it, rehearse in it, travel in it, dance in it, cook in it, prune my pear trees in it, drink wine in it, sing my baby to sleep in it."

Far more often than "Why?" the first question Martin's project spawns is, "Do you wash it?" After being asked about her hygiene countless times, she's decided, "People want to know how many societal rules I'm breaking — it's a way to ask me if I'm normal." The answer is yes, about as often as you'd wash any regular clothes item.

On her Web site she explains she had no intention of doing a "second-skin project," in which case she'd never take the dress off, even for sleeping and bathing.

What she did intend was to make "one small, personal attempt to confront consumerism." Martin was troubled by sweatshops, over-consumption and the modern American penchant for disposable items. And she was irritated by the societal pressure on women to buy into, literally and figuratively, what's considered fashionable. She was also facing the financially daunting prospect of raising a baby on an artist's income.

"It was never my intention to be preachy," she says. "I just wanted to do it for me. I'm so image-conscious, I wanted to give myself a personal challenge."

Martin has been tracing the challenges, surprises and revelations of wearing the little brown dress in her remarkably candid blog, which — thanks to other bloggers' mentions — has caused an Internet wildfire of late.

"It didn't occur to me it'd take on a life of its own," she says of the lively online discussion her journal has inspired, "but it gives the project a sort of intellectual life."

For the most part, the cyberspace response has been enthusiastic, and the chatter has turned out to be Martin's most treasured part of the experience.

"It's amazing to get responses from all over the world. I've had great conversations. It seems like people are looking for a reason to talk about the decisions they can make with their pocketbooks."

She adds that as a choreographer for Better Biscuit Dance, the reaction is of an entirely different sort than she's used to. "I've never had people say they're inspired to behave a certain way after one of my dance performances."

Online critiques of the project often come in the form of accusing Martin of "not really doing it" because she takes off the dress to sleep and bathe. "People seem to get caught up in whether I'm breaking the rules," she says. "But it's my project!"

Which is not to say that Martin hasn't done her own questioning of the little brown dress idea. "Looking back at some of the reasons I originally listed for doing the project makes me cringe now," she says. She specifically notes a comparison she made to people in developing countries who may only have one thing to wear.

"But the only reason I can do this project is because of privilege and my place in society," she realized. "I have my own business, I'm an artist, people are OK with me being kooky [and] I don't have to wear a uniform at a job every day."

Over the course of the year Martin had many such revelations, including how she could employ the "sustainability" mindset of the dress to aspects of her life beyond fashion. For this reason she's grateful she stuck it out the 365 days. "I wouldn't have gained these insights if I had only done it a few months."

As for how the dress held up over the year, it's a testament to quality craftswomanship. While Martin wasn't sure it would last (in the beginning she told herself, "If it ends up a ratty shred, I'll wear it every day as a scarf"), the dress is in impressive condition.

A talented seamstress and costumer, Martin put a lot of thought into the simple, self-designed pattern. "What could take me through a year — gardening, biking, dancing and having a baby boy?" she asked herself. She tried to think like a pioneer woman, emphasizing self-reliance, using materials at hand and trying to make something that would endure. She came up with a solution that manages to be nondescript, practical and terribly cute all at once — sort of like a Brownie uniform.

The sleeveless, trim bodice with a slightly A-line skirt allows her to move freely, and add warmer layers over and under when needed. The 100 percent cotton, brown denim fabric — now faded and soft from so much washing and wearing — has proven both sturdy and stain camouflaging.

She's replaced several broken shell buttons, but when she ran out she decided a safety pin would do the job just fine. To her delight, she recently realized that due to its natural components, the dress is technically biodegradable.

Which raises the question: What will become of the little brown dress when Martin takes it off for the last time tonight?

"I feel sorry for the dress," she says. "I feel like it's tired. I've asked it to perform way more than most items of clothing ever do. I want to let it rest, so I'm going to wash it and hang it up for a while."

As for how Martin feels about the un-dressing, she's somewhat torn. "I have a sort of armor on, and I'll lose that," she says, her sentiment reinforced by the frequency with which she calls the garment her shell. "But it'll be nice to wear another shape. A long skirt would be a nice sensation. Maybe a stretchy top. Denim is a pretty stiff fabric."

But perhaps of more pressing importance: What is she going to wear tonight? After she performs the solo dance she choreographed specifically for the project, Martin will slip out of the little brown dress and into ... well, she's not quite sure. It will definitely be something she's made herself (stay tuned for next year's project), but beyond that, she's a bit befuddled. "Once you take away the options, you don't have to worry about that anymore. With this dress I got to delete all that concern about not looking right — am I overdressed or underdressed? — so that internal dialogue has been absent for a year," she explains. "I'm just sticking my toe back into that pond and it's a little weird."

Brangien Davis is a frequent contributor to The Seattle Times: brangiendavis@yahoo.com.

Keeping with the momentous nature of the project, Martin will take off the dress in a "brown dress solo" dance performance that coincides with her 30th birthday celebration today. (THOMAS JAMES HURST / THE SEATTLE TIMES)

Throughout the year, Alex Martin's brown dress has undergone many changes: missing buttons, a higher hemline, fading fabric and a little curl at the collar. She views these changes as additions to the dress's character, similar to the changes she herself has undergone over the year. (THOMAS JAMES HURST / THE SEATTLE TIMES) 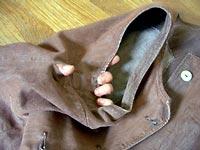 From Alex Martin's Web diary, May 29, 2006: The hole! A split in the side seam of the bodice, just below my right arm ... just my thumb fits through. Now that it's finally arrived, I am so shocked &#8212; surprised by where it started, wondering if it was there for several days before I noticed. And also I'm delighted! It's nice to have change, feels like progress of some sort. (From Alex Martin's Web diary, littlebrowndress.com) 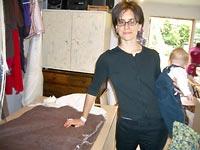 Martin had to consider many factors when designing the dress, including caring for a baby. (COURTESY OF ALEX MARTIN) 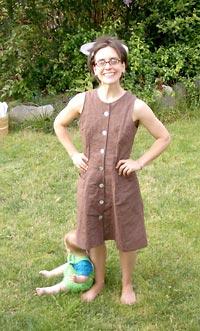 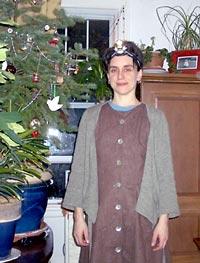