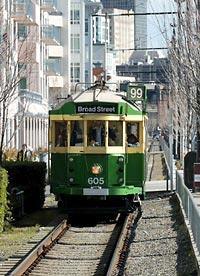 Plans for a new waterfront trolley-maintenance barn in Seattle's Pioneer Square have gone off track, putting the future of the vintage streetcar line in question.

Developer Greg Smith, who was to build the barn as part of a larger condo project, says he's pulling out of a deal with the city, county and port "for now." Smith says the city has waited too long to give him a height variance for the project and he has fallen behind other developers in the race to build condos in the city.

Construction costs also have increased, and Smith fears the project will cost more than he budgeted when he struck a tentative deal with government officials last summer.

Smith's change of mind doesn't mean the project is dead. He said he's willing to renegotiate.

"I'm happy to sit back down with the county and city to talk about opportunities of putting a maintenance base on the site, but it needs to reflect the current market. Development is a high-risk game, and a lot has changed over the last year," Smith said.

King County, which operates the trolley, does not have an alternative plan for the maintenance shed.

"There isn't a Plan B on the shelf we can just dust off," said Sandeep Kaushik, spokesman for King County Executive Ron Sims.

Seattle Deputy Mayor Tim Ceis said he would work with the county to salvage the project.

The waterfront trolley stopped running in November because the Seattle Art Museum is building a sculpture park on the waterfront where the trolley's old maintenance barn was located.

Sims, Smith and Mayor Greg Nickels announced a plan last summer to revive trolley service in the summer of 2007. That plan called for a new barn just east of Pioneer Square's Occidental Park, on a parking lot co-owned by Smith.

Under the agreement, Smith would build the barn and retail space at street level and add parking and about 150 condos above it.

The county would pay him $7 million, and the city and the Port of Seattle would each kick in $1 million. The city would also give Smith a variance so his building could be 130 feet tall, instead of the 100 feet currently allowed. Because the trolley barn occupies valuable space at street level and below, Smith says he needs the added height to make the project profitable.

Nickels sent a zoning proposal to the council in December. But the council's urban-planning committee, chaired by Peter Steinbrueck, has yet to take up the zoning request.

Last week, the Pioneer Square Community Association sent Steinbrueck a letter encouraging him to give Smith a variance. The group says Pioneer Square needs more housing to support its merchants and change its rowdy image.

Ceis blames Steinbrueck for the delay.

Steinbrueck counters that his committee has been busy with complex issues, such as the mayor's proposals to allow dramatically taller buildings downtown, and says he will not "rubber stamp" legislation concerning Pioneer Square's historic district.

Steinbrueck said he asked Smith in January for a model of the project, to show how it would fit "in the context of nearby historic buildings." Smith didn't provide the model and only recently said it was available.

Craig Montgomery, executive director of the Pioneer Square Association, does not believe a rivalry between Steinbrueck and Nickels contributed to the delay, as some have suggested.

"I truly believe it's an issue of a packed agenda [before committee members] and then a backlog they had to address, and then a legitimate concern by Councilman Steinbrueck of how that building is going to fit into the historic district," Montgomery said.