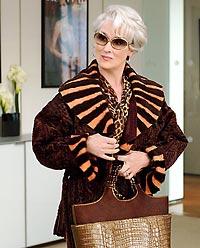 This Nancy Gonzales handbag carried by Meryl Streep in "The Devil Wears Prada" is among the film pieces being auctioned on eBay. (20TH CENTURY FOX)
By Samantha Critchell
The Associated Press

The hundreds of outfits and accessories in the film "The Devil Wears Prada," which opens Friday, surely will inspire some moviegoers to spruce up their own wardrobes, and 20th Century Fox and several fashion-industry partners couldn't pass up an opportunity to help. There are several tie-ins to the movie, including charity auctions of costumes worn by stars Meryl Streep and Anne Hathaway.

Hathaway says auctioning off the wardrobe — Streep's idea — prevented catfights among the cast and crew. But there was one vintage green coat she really didn't want to part with, so her boyfriend bought it for her as a gift. "I was like, 'OK, you're off the hook for my birthday,' " she says.

Some items were reserved for an eBay auction that benefits Dress for Success, an organization that helps prepare low-income women for career development.

Likely the hottest items in the auction, though, are shoes, including some Christian Louboutins and a pair of Azzedine Alaia maroon and black suede pumps.

EBay's White says the allure of buying items specifically chosen by Pat Field, who also was the costume designer on "Sex and the City," should draw a lot of people to the site. "I'd love to have Pat Field dress me every day," she says.

Amazon.com has launched a "boutique" dedicated to the film on its Web site, featuring a handbag created by Field. It's a shoulder bag in brown distressed faux leather with a tassel and metallic embellishment.

Beauty retailer Sephora teamed with Prada, New York-based hairstylist Oscar Blandi (who counts Katie Holmes and Jennifer Garner as clients) and Christian Dior for a series of products based on the movie that Sephora beauty editor Julie Redfern promises will "bring out the movie star in all of us."

"The fashion, hair and makeup from the film is so chic and glamorous," she says.