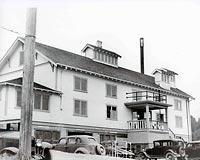 The cannery was built in 1936; it closed in 2001. (CITY OF KIRKLAND)
By Lisa Chiu
Seattle Times Eastside bureau

Ever since it was built in the Great Depression, the gray, two-story clapboard cannery on Eighth Avenue has come to the aid of Kirkland residents.

"People were needy. In 1938, it [the cannery] helped 10,000 people, it gave them food," said Bob Burke, president of the Kirkland Heritage Society.

As a project under Franklin Roosevelt's Works Progress Administration, the cannery was built in 1936 for families to preserve fruits and vegetables at a time food was scarce.

The building was used communally and was the only cannery in the country where people could go to can their home-grown goods. Other canneries were run more like businesses where people dropped off food and picked it up canned, Burke said.

The Pound family took over the cannery in 1947 and ran it as a business where residents still went to can fruits and vegetables, and later, fish. The cannery closed in 2001, when the Pounds sold the business to a California company that did not choose to use the Kirland location.

But if city officials, residents and property owner Thad Pound get their wish, it won't be long before the cannery serves the community once more.

Kirkland hopes to either purchase or assist in a private purchase of the building from Pound, have it modernized and turned into something for community use.

The question is, what?

At an open house at the cannery this month, residents eagerly listed ideas:

An art gallery and studio. A winery. A rental space for weddings. A hardware store. A community center. A food co-op. A wellness community. A cooking school. Even a new cannery.

Kylie Hansen has lived next to the building for two years and loves its period architecture.

"It's so unique. There's nothing like it left anymore," said Hansen, who likes the idea of turning it into a cooperative with an arts market such as Pike Place Market, or a winery with events such as crushing grapes to make your own wine.

Whatever the building's future use, she said, she hopes it's communal and economically viable.

The main canning room houses a huge metal smoker and a large cooler. The sun beams through two large skylights, one of the inspirations for the art-studio option.

There are two smaller adjacent canning rooms along with space the Pounds have converted into their apartment.

In the basement, about 16 pilasters support the top floor, each column squared from a single piece of dark brown lumber.

All the packaging for canned shipments took place in the basement, and stencil signs for the Pounds' old company name, Kirkland Custom Cannery, sit along with large wire canning baskets and unused labels.

All cannery trucks were parked downstairs, said Thad Pound's son Michael, who worked for his father's business throughout high school and college.

On a tour of the cannery's basement during this month's open house, Michael Pound, 38, shows a hardware closet, what he calls the scariest place in the cannery — at least for a young child.

"If there were ever a ghost here, it would be in here," he said, pointing to a shadowy room with a dirt floor.

"There was no heat or insulation," Michael Pound said. "In the summer it was hot, and in the winter, the frozen fish bay — now that was cold."

Thad Pound said he hopes to live in the cannery for two to four more years. By then he and his wife, Gail, hope to move to a house in Kirkland.

"If I sell to the city, that's fine. If I sell to someone else, that's fine, too," he said. "But I've been here 59 of the 64 years of my life and ideally I would like to see the building remain and not be torn down. Used for the public good somehow."

If the city buys the building, there is a far greater chance it won't be torn down, he said.

The city is paying for a $10,000 structural assessment of the cannery to determine how much it would cost to renovate the building's shell, regardless of its future use.

That would include an overhaul of the heating and air-conditioning systems, making the building handicap-accessible, ensuring the foundation is cleared for seismic concerns and reinforcing the masonry, said senior city analyst Tracy Burrows.

The assessment, which will be completed in a few months, also will consider the cost of creating two yet-to-be-determined uses for the building, as examples. Purchasing the building alone could cost up to $2 million, Burrows said, but that doesn't include the work needed to fix it up.

The city is hoping to find a partner, such as a corporate sponsor or a nonprofit that would like to occupy the building to help raise money, Burrows said.

The city also is looking at aiding a private purchase of the cannery, provided the new owner is committed to preserving the building. Whatever happens, it will be a multimillion-dollar endeavor, she said.

Kirkland may also consider state historical designation for the cannery, although that could make it harder to find a private owner, said Pound, because there are greater restrictions on what can be done to a historic building.

During its early years, the cannery was run by King County, and for the first 10 years, no money changed hands.

Residents were only asked to give away one-third of what they brought in for more needy families. Petitioners supporting the cannery stated in 1936 that they wanted it to be "noncommercial" and "noncompetitive."

Kirkland took over ownership in 1946, and it was leased to Thad Pound's parents, Harvey and Ruth Pound. The Pounds continued to can fruits and vegetables residents brought in, charging per pint or quart canned.

They purchased the building in the late 1960s and switched to fish. Residents brought in fish and picked up their own canned or smoked catches until 1997. The Pounds also began producing canned seafood products before selling the business in 2001.

Burke of the Heritage Society said he hopes the building gets historical designation but cautioned that that doesn't preclude it from being torn down.

He said the cannery should be restored "so that it can provide a link to the past and people can understand what the community was about."

"Do you know anybody that cans anymore? It was a very different society; when you look at aerial photographs in the 1930s, Kirkland had one house per block, there was a lot of open space and a lot of places that people could grow things," Burke said. "Preserving food was much more a part of the way people lived."

Resident Cathy Bohlke said whatever happens to the cannery, she hopes its history is documented.

"I'd like to see it preserved in some way. This building is historical," she said. "It has a lot to say."

As a child, Thad Pound would play in his parent's cannery in Kirkland as fish, fruits and vegetables were packed for customers. Pound, 64, is working with the city to convert the cannery, built as a public-works project, to serve the community once more. (JOHN LOK / THE SEATTLE TIMES)