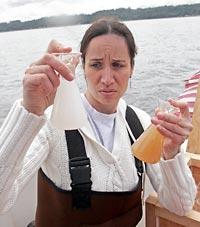 UNION, Mason County — It's been three years since the last major die-off in Hood Canal, when thousands of sharks, sculpins, sea stars, octopi and other creatures suffocated in Hood Canal from lack of oxygen.

But that's not to say it has been an uneventful period.

Eelgrass beds — nurseries for crab and salmon — have declined more here than in the rest of Puget Sound. Bottom-dwelling rockfish continue to disappear. Algae blooms, which suck oxygen from the canal's deep waters, have become more common. And annual "bubbles" of low oxygen are growing, lasting longer and showing up at unexpected times of the year.

Septic tanks and sewage have long been fingered as culprits. But lately scientists have been learning that the canal's deterioration may be far more complex than first thought.

A year into a three-year investigation, they are learning that the ways damaging nutrients flow into the fjord may be as important as the amount that does. They're questioning whether other changes, from the Skokomish River, with flows altered by the Cushman Dam, to deforestation and global warming, are adding to the problem.

And they're recognizing that just finding the exact sources of Hood Canal pollution is a far cry from figuring out how best to breathe new life into a waterway whose banks are now home to 50,000 people.

"Do we go after trying to deal with forest practices? Put in billion-dollar sewer systems? Work with river managers?" asked Jan Newton, a University of Washington scientist helping lead the investigation. "It's important to know which actions will be the most effective because we have limited dollars."

From a boat on Hood Canal recently, Lalena Amiotte, program coordinator for the Skokomish Tribe's natural-resources department, tested a vial of water from its most frequently distressed spot, Lynch Cove.

Scuba divers recently found a handful of dead crab and fish on the bottom nearby. Tribal shrimpers don't bother to fish in the cove anymore. Even so, Amiotte shook her head when her vial turned cloudy white, a sign the sample was nearly free of oxygen.

"We're going to have a tough summer," she said.

For years, scientists have had a basic understanding of Hood Canal's troubles: Marine water circulates poorly, so an oversupply of nutrients, typically nitrogen from human and farm waste, dead plants, animals or run-off, causes plankton to bloom. When the plankton dies, it decays, robbing water of oxygen.

Occasional fish die-offs have been recorded since the 1920s. But in three back-to-back incidents in 2002 and 2003, tens of thousands of perch and other fish washed up dead, and deep-water creatures such as lingcod and spot prawns were seen gasping in shallows.

The state Legislature and the federal government are spending millions to survey septic systems, monitor the canal and make new scientific reports. Computer models are expected next year to detail precisely how the canal works.

But the results so far have also highlighted how much scientists still don't know.

"We've made progress on figuring out how much [nitrogen] is coming from land," said Jeff Richey, a terrestrial oceanographer at UW. "What we're in the process of figuring out is what difference that makes to the water."

It's a complex system: A new federal study found that ocean water flowing into the canal helps flush stagnant water out. But that same ocean water also can bring more than 90 percent of the canal's nitrogen. So the pollution from the land around the canal provides only a fraction of the nitrogen that is messing up Hood Canal.

"The question is when and where and how does that get distributed?" said the UW's Newton. "Has it changed over time? We don't know."

Even so, that fraction of waste from septic tanks and elsewhere on land probably still does the most damage, because it flows onto the water's surface, where it mixes with sunlight and triggers algae blooms.

"That could be the tipping point that puts us over the edge," said Duane Fagergren, special-projects director with the state's Puget Sound Action Team.

Other factors may also contribute.

Logging in the Olympic Peninsula has transformed some forests from evergreens to alder, which draw nitrogen from the air and ground to their roots and releases it during heavy rains. And the Skokomish River, the state's most flood-prone, keeps washing suffocating sediment deeper into the canal, making it hard for shellfish, which help cleanse the canal through filter-feeding, to take root.

And there are complications: A little bit of nitrogen in the wrong place on the wrong sunny day can do more harm than a whole lot of it in another location.

"Where you put the nitrogen really impacts how it affects the biology," said Tony Paulson, a U.S. Geological Survey hydrologist. "And winds are a big factor, too."

Even before all the answers arrive, some changes are coming that promise improvements on Hood Canal.

The Skokomish Tribe is now composting tens of thousands of pounds of dead fish instead of dumping the carcasses into the water.

The city of Belfair is designing a new sewage-treatment plant, and Mason, Jefferson and Kitsap counties are fixing failing septic systems. Human-waste facilities are being upgraded at 10 state parks.

And a few Mason County farmers have turned to organic crops recently, which means fewer herbicides and other pollutants flushing into the canal.

Still, no one expects the turnaround will be easy.

"When it comes to big solutions ... I just don't know," Amiotte said. "But our entire culture is based on this water, so we're going to keep working." 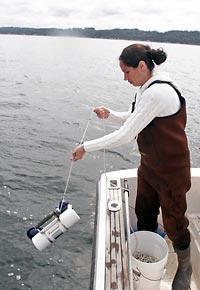