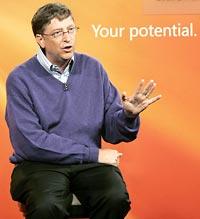 Microsoft Chairman Bill Gates announces Thursday in Redmond he will transition from day-to-day responsibilities at the company over the next two years to focus on the Bill & Melinda Gates Foundation. Behind him is part of a Microsoft slogan. (TED S. WARREN / AP)
By Benjamin J. Romano
Seattle Times technology reporter

The man who once aimed to put a computer on every desk and in every home will turn his full attention to something even more ambitious: the health and welfare of the world.

Microsoft Chairman Bill Gates, who dropped out of Harvard to build the world's largest software company and become the world's richest person, said Thursday he is stepping aside over the next two years to work full time at the Bill & Melinda Gates Foundation.

The world's largest charity, the Seattle foundation has a $29.1 billion endowment focused on fighting disease and improving education around the world.

The move comes at a critical time for Microsoft, which has brought tens of thousands of jobs to the Puget Sound area and created enormous wealth. But Gates, who has generated controversy over business practices, said in a Redmond news conference with his friend and business partner, Microsoft Chief Executive Steve Ballmer, that the company is as strong as ever.

"Of course, with the success of Microsoft, I've also been given the gift of great wealth," he said. "I believe that with great wealth comes great responsibility — a responsibility to give back to society and to see that those resources are put to work in the best possible way to help those most in need."

Gates said Microsoft had achieved much more than he and co-founder Paul Allen imagined.

"We talked about a computer on every desk and in every home. It's amazing to see so much of that dream become a reality and touch so many lives," Gates said. "I never imagined what an incredible and important company would spring from those original ideas."

Joined by Ballmer later in an interview, Gates said he came to the decision Tuesday after ensuring that a strong transition plan was in place and that the company "would not miss a beat."

He began by consulting with his wife, Melinda, the foundation's co-chairwoman. He then brought in Ballmer, and later other close advisers, including his father, William Gates Sr., and billionaire investor and famed Gates bridge partner Warren Buffett.

Gates showed some anguish in announcing his decision — especially in describing his long relationship with Ballmer.

For now, he said, he is ready to get back to work. When he thinks about what will happen when the change takes place in two years, "I'm sure that will be quite emotional, at least for me," Gates said.

"It's an amazing thing to get to work together and so I do choke up a little bit when I think about that, and ... I will in two years be giving up some of that," Gates said.

Under the transition plan detailed Thursday, Gates will assume the role of senior technical adviser at the company in July 2008, but he intends to continue his chairmanship of Microsoft's board for the foreseeable future.

Gates' announcement comes at a time of increased competition from Internet adversaries Yahoo! and especially Google, which has experienced the kind of growth once associated with Microsoft.

As more computer services migrate to the Internet, Microsoft's biggest money-makers — its Windows operating system and the software applications that run on it — could become less important to computer users.

"I think Microsoft has to reinvent themselves technically again as they did in 1995. It's a big challenge," said Mitchell Kapor, president and chairman of the Open Source Applications Foundation.

"When I talk to Internet entrepreneurs, they are all terrified of the competition from Google. Not a single one is worried that their entry would be blocked by Microsoft. It's such a change from a few years ago."

Kapor, founder of Lotus Development in 1982, was Ozzie's boss there. He said if anyone can help Microsoft catch Google and the other leaders in Internet services, it's Ozzie.

"The challenge is not about Microsoft's profitability or making money. They'll continue to make billions. Do they lead the future direction of information technology or not? That is slipping away," he said.

Gates said Ozzie, 50, who joined Microsoft just over a year ago, has the perfect résumé to take over as chief software architect, a title Gates has held since stepping down as CEO in 2000.

Gates said, "You couldn't write it better because [Ozzie] has personally led so many of the key things that happened in this industry."

Mundie, 56, takes the title of chief research and strategy officer and will also work with General Counsel Brad Smith on intellectual property and technology policy.

Mundie has wide-ranging international experience. Gates and Ballmer said in an interview that Mundie has probably met more world leaders than they have.

His selection as one of Gates' successors indicates Microsoft's focus on international issues, including its ongoing dispute with European Union regulators and issues around growth and intellectual property in Asia, said Laura DiDio, an analyst with the Yankee Group.

"It's going to be a very smooth transition," DiDio said. "I think it would be probably more jarring for Wall Street and a more immediate impact if we were talking about Ballmer stepping aside."

Allen, who left Microsoft in 1983, said Gates wouldn't move away from his day-to-day role at Microsoft "if he didn't believe he was leaving Microsoft in great hands."

"Bill is going to spend the two years of his transition putting his finishing touches on the overall company strategy for the long term," Allen added.

Thursday's news came as little surprise to longtime observers of Microsoft, who saw this as a potential plus for the company and its long-stagnant stock. Wall Street shaved 12 cents off Microsoft's share price in after-hours trading. The announcement was made just after 1:30 p.m., a half hour after the stock markets closed.

Microsoft's stock had gained 19 cents during the regular session Thursday, but has lost more than 17.2 percent this year.

Gates' transition may open the way for younger executive talent working in his shadow.

"[Microsoft] is not making 100 or 1,000 new millionaires every year, the way they were," DiDio said. "And the high-tech industry itself is maturing, so it's tougher to make an impact. New blood may be what you need."

Some observers were concerned the news could have an impact on company morale, which has appeared to be on the upswing of late with improved benefits and the repeal of a widely criticized employee-review system.

"Losing such a thought leader could temper morale in the short term, but will give a new generation of leaders ... a chance to step out of Bill's shadow," wrote Brent Thill, director of software research at Citigroup, in a note to investors.

Gates has always fine-tuned his role at Microsoft as the company has grown.

"In the early days, I liked to review every line of code and interview every job applicant," he said during the news conference. "Today, our products include millions of lines of code, and we hire thousands of people a year, so I've had to lighten up in both of those areas."

More recently, he's turned his focus outward and joined the elite ranks of business-statesmen, hosting world leaders, including the president of China, and sharing a magazine cover with U2's Bono, who was named Time magazine's person of the year with Melinda and himself.

Mark Anderson, a Friday Harbor technology analyst, said Gates was already in line for the title of "most generous and philanthropic person in the history of the planet, he and his wife both." Making the move to full-time philanthropy at this stage in his life will allow him to benefit as much as the recipients of his charity.

"I think he's smart to do it while he's young enough to enjoy it," Anderson said. "It will change his life in a very positive way."

Gates said he has not charted his course at the foundation yet. He is focused now on making a smooth transition. And his role in international affairs, either for Microsoft or the foundation, is unlikely to diminish.

Ballmer said, "Bill teased me earlier. He said, 'Anytime the president of China calls, feel free to give me a call and we'll have him over for dinner.' "