Mamma Melina's boys are at it again, adding their Italian accents to downtown's dining scene. Barolo Ristorante, the latest venture for brothers Salvio, Leo and Roberto Varchetta, is set to open next month in the Metropolitan Tower complex. (1940 Westlake Ave., Seattle; 206-770-9000).

It's been nearly 20 years since the Varchettas put their mark on the local dining scene with Mamma Melina (4759 Roosevelt Way N.E., Seattle, 206-632-2271), the Southern Italian U-District restaurant named after their mother. Since then, the family — individually and collectively — have owned and operated several now-defunct restaurants, including the more formal Leo Melina and Buongusto, a longtime favorite atop Queen Anne Hill.

In the interim, mamma Melina and papa Pasquale have happily retired to Formia, on the Italian coast, and their sons have since pooled their talents at their signature restaurant, where brother Roberto runs the kitchen. But the time has come, says Leo, to branch out once again.

"Barolo is a very earthy region," says Leo, "so the menu's emphasis will be on truffles, porcini mushrooms and house-made pastas." In addition, expect extensive antipasti offerings, filet of beef with Barolo and green peppercorns and such rustic fare as coda di bue in cassoeula con piselli — oven-baked oxtail with peas.

"We wanted to be downtown, and the idea is to have a restaurant that will really reflect the local flavors and ingredients of the Northwest but embrace an area of Italy — that hasn't been done much here."

To that end, the brothers Varchetta, who hail from Naples and will share oversight of the new restaurant, have hired two chefs de cuisine to execute the menu at Barolo. Michele Godina, late of Zeffirino Ristorante in Las Vegas and Galileo in Washington, D.C., and Riccardo Simeone, of Zeffirino and Il Fornaio, in Denver.

Barolo's interior design comes courtesy of Italian-American designer Denise Corso, and the 110-seat restaurant and bar will contrast the old with the new, says Leo. "It's a modern building, but we're putting in a lot of ornamental accents," he explains, describing contemporary chairs with antique-style chandeliers. In keeping with a popular trend, Barolo's dining room will house an 18-seat communal table. Barolo will be open for weekday lunch, nightly dinners and weekend brunch.

Pasta and a wine bar? Wine not?

The restaurant's name translates as "Why Not Pasta and Wine?" and certainly defines its mission. "It will be casual and easy, strictly pastas plus focaccia-style pizzas," says Lily, whose husband, David, has long been known for his special multicourse dinners and has apparently passed the cooking gene on to their son Christopher.

Chris is an accomplished young culinarian who ranked second, nationally, among high-school chef-competitors before heading off to college last year, says his justly proud mamma.

That said, Chris and his younger brother Alex, who work closely with their parents, won't be heading up the kitchen in the family's new restaurant quite yet. Their dad will organize and train the chefs at his new restaurant, splitting his time between the two locations.

Brothers Bret and Marc Chatalas are jumping into the expansion fray as well, something they've done slowly and carefully over the years. "We don't run before we can walk," says Bret, whose Mexican and Southwest-inspired Madison Park restaurant and bar, Cactus (4220 E. Madison St., Seattle; 206-324-4140; www.cactusrestaurants.com) has been a screaming success since it opened in 1990.

That success translated across Lake Washington in 2002 when he and his brother cloned Cactus in Kirkland (121 Park Lane, 425-893-9799). And opportunity recently struck again when the brothers leased a space for a third venue, set to open in late July at Alki Beach.

"Our restaurants are bursting at the seams, we can't expand at either place and this [Alki location] wouldn't cannibalize the others. Madison Park and Kirkland are waterside communities, so Alki is, in our opinion, a perfect fit," Bret says. The new 4,000-square foot restaurant and bar, under construction in West Seattle's former Alki Market (2820 Alki Ave. S.W.), will have a petite patio, a small parking lot and approximately 125 seats.

Eric Wright, head chef at the Kirkland store, has been named executive chef, with oversight of the kitchens at all three restaurants. Bret (who manages Madison Park) and Marc (who tends their Kirkland locale) have been busy hiring and training managers in their existing restaurants, with plans to move them into West Seattle ASAP.

Drop the jewels, and mind your Drey's and Qs!

Early this year, when last we discussed the restaurants Sapphire (with dual locations on Queen Anne Hill and in Madrona), new owners Rick Fox and Rob Smith had just taken over. They'd done a swift cosmetic makeover on Queen Anne, a more serious one in Madrona and — with the help of chef Steven Hazell, who heads up their other restaurant's kitchen at Fremont's Triangle Tavern — overhauled both menus.

Now those busy boys are at it again. They've ditched the Sapphire concept, the name and even the recently revamped menus to bring us two entirely "new" restaurants.

This neighborhood newbie (can I say that?) hopes to draw a wider audience with an "approachable" menu featuring everything from soft tacos ($8.50) to halibut fish 'n' chips ($10.25), hot pastrami sandwiches ($8.50) to grilled beef tenderloin with cheddar-mashed potatoes ($23).

Weeknight happy hour (from 4-7 p.m.) should help draw a crowd, and the kids will be happy to come to dinner what with old-fashioned handmade shakes (spiked for the grownups!) on the barman's agenda. Hours: dinner from 4 p.m. nightly, weekend brunch from 9 a.m. to 2 p.m. 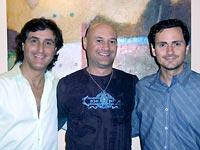