The backyard and exterior of Terry's home. (MIKE SIEGEL / THE SEATTLE TIMES)
By Lucy Mohl
Special to The Seattle Times

The Roland Terry house is up for sale.

Terry is an icon of a style associated with this region, and a leading force — along with Paul Hayden Kirk, Ralph Anderson, Wendell Lovett, Victor Steinbrueck and Fred Bassetti— behind the rise of modernist buildings in the postwar period and through the middle of the 20th century.

Rugged, harmonious with the landscape, elegant and exacting in detail, Terry spaces constitute some of the most breathtaking examples of indigenous design.

The homes he and his partners built, often with prominent civic names attached, are celebrated.

His commercial building projects, as well, are famous. The Queen Anne restaurant he designed for Peter Canlis in 1950 is one of the most beautiful in the country.

The future of his last home, however, is a question mark.

Terry died Thursday, and his longtime friend, Abdel Ageep, has decided to move out of the Mount Vernon home.

The 9.85-acre property on a quiet country road in Mount Vernon is in the heart of the Skagit Valley. The neighbors are tulip farmers, and the house, built in the 1920s, is one of the original homes of tulip families.

The house is a solid, simple structure and in many ways, a very modest place.

Terry and Ageep moved into the house 14 years ago, leaving behind a beautiful, grass-roofed home in the San Juan Islands. Terry was then 75, but they tore into the property, designing and rebuilding, doing the work themselves.

Unlike Terry's work for well-financed clients, this was done on a budget.

"We spent so many hours pulling nails out of this place," Ageep said.

Ageep recalled setting hundreds of bricks in sand in the curved brick courtyard to create a serene approach to what had been the back of the house.

They changed the garage into the main entry and living room, adding a metal-framed Dutch door and limestone fireplace.

An atrium connects to the original house, and what was once the exterior is now indoors.

The former living room became a den and dining area with hand-painted floors. The kitchen is the center of the house.

Outside, connected by a wisteria-covered trellis, they created one additional outbuilding for their most costly addition: an indoor swimming pool. The only space on the property that hasn't been altered substantially is the barn, which was ordered from the Sears catalog in the 1920s.

All the characteristic Terry qualities — the sense of balance, detail and openness and the new siting for the house — are present.

Terry was considered a complete designer, working out interior details and landscaping as well as the buildings themselves. He drew deeply from the Northwest environment, going so far as to bring washed-up timbers from Puget Sound into living rooms.

One of the more intriguing possibilities for the estate is its potential as a vineyard.

Ageep hopes that the barn will one day be a museum that houses Terry's collection of Northwest paintings, Ageep's designs, and a place where Roland Terry wine is sold.

"We had great times here," Ageep said. "His name will be a legacy."

Lucy Mohl is a producer for seattletimes.com. 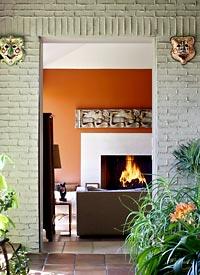 Architect Roland Terry's Mount Vernon home is on the market. The view here looks toward the fireplace and into the living room. Terry is now in a retirement home. (MIKE SIEGEL / THE SEATTLE TIMES) 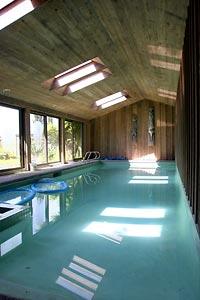 The swimming pool was built in 1992. (MIKE SIEGEL / THE SEATTLE TIMES) 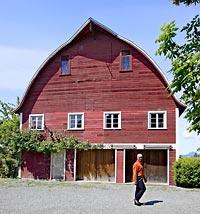 Abdel Ageep makes his way past the big reg barn, a landmark seen along Beaver Marsh Road in Mount Vernon and part of Terry's property. (MIKE SIEGEL / THE SEATTLE TIMES) 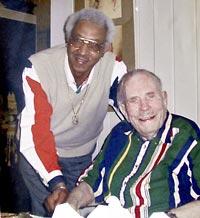 NW architect Roland Terry, right, and Abdel Ageep in 2003, in a photo courtesy of Ageep.
A look at Terry's home

Northwest architect Roland Terry completely renovated this home, bringing to it his own style.