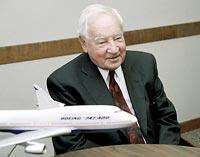 Joe Sutter grew up on Beacon Hill and went on to lead the 747 design team.
By John B. Saul
Special to The Seattle Times

If your grandfather sat down to tell you the story of his working life, he'd probably tell it in a straightforward manner, starting at the beginning and going to the end.

The language would probably be conversational, with little in the way of narrative tricks or literary fireworks. He might have a few things to get off his chest, or at least a need to set things straight to his way of thinking.

And the overall attraction of the story might depend on what your grandfather did. If he led the design team for Boeing's 747, the world's first wide-body jetliner, as Joe Sutter did, then the story would take on more importance, especially if you have an interest in The Boeing Co. and Seattle's link with the aircraft industry.

Sutter tells his story in "747: Creating the World's First Jumbo Jet and Other Adventures from a Life in Aviation" (Smithsonian Books, 265 pp., $26.95). The approach is what you would expect from an engineer now in his 80s looking back on a long and successful career.

It is told in a straightforward manner, from his boyhood on Beacon Hill watching planes take off from the Boeing factories down below to the design, building and launch of the 747 and beyond. There's nothing fancy about the writing, which tends toward the prosaic, but its simplicity is a blessing when it comes to Sutter's explanations of the engineering problems faced in creating the 747.

And he does have a few things to get off his chest.

It's clear that he often did not see eye-to-eye with Malcolm Stamper, the overall head of the 747 project and future president of Boeing.

Stamper wasn't the only higher-up Sutter butted heads with, but the book is hardly a "tell-all" mining of Boeing dirt. In several instances, Sutter omits names of those who failed to measure up to what Sutter confesses others have called his "hardnose" approach, which he prefers to see as principled.

Perhaps the overriding concern that Sutter hopes to address is his feeling "that what my design group actually achieved has never been fully understood or appreciated within Boeing."

When you realize that Sutter's team figured out in just 24 months how all that would go together, had to struggle for resources against the SST project — then considered the next big thing at Boeing — and that the 747 and its offspring are still going strong in today's aviation world, it's impossible not to marvel at this engineering feat performed on Seattle's home turf.

Joe Sutter will read from "747: Creating the World's First Jumbo Jet and Other Adventures from a Life in Aviation,"