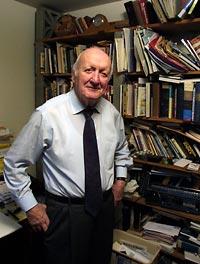 His wife of 58 years, Leone Turner, was at his bedside.

"It was very peaceful," said his son, Chuck Turner, a businessman in Shoreline. "He just slipped away."

Through his 24-year tenure at University Congregational United Church of Christ, his 22 years as a columnist and his speaking engagements around town, the Rev. Turner inspired thousands with his gentle humor and down-to-earth messages that spoke to life's important values and how to live by them.

"Be kind," he would say. "Everyone you meet is carrying a heavy burden."

The Rev. Turner inspired by example as well, exhibiting to friends, family and strangers the compassion he urged others to show.

Family members remember him as a kind and generous husband and father. Chuck Turner said his father showed him how to be concerned about others. "He always said: 'Love one another.' "

"He was always encouraging people to do the right thing," said close friend Ralph Swanson Sr. "He always spoke in a positive way."

The Rev. Turner grew up in Akron, Ohio, born to a Protestant mother and a Catholic father who taught their children to pray but didn't insist they go to church. The fifth of six children, he was a scrappy athlete who wrestled in high school and was an all-city football player.

He turned to religion at 17 when a traveling evangelist came to town. His religious views continued to develop at West Virginia Wesleyan College and Yale Divinity School.

After graduating from Yale in 1943, the Rev. Turner served at churches in Michigan and in Kansas. He met Leone, a church organist, in Michigan during his first ministerial job. After her husband was killed in World War II, they eventually fell in love and married, and he adopted her 6-year-old son, Greg.

In 1958, the Rev. Turner came to Seattle's University Congregational United Church of Christ, where he preached to some 1,500 each Sunday before retiring in 1982.

Congregants remember his sermons for their broad appeal, delivered from memory and sprinkled with poetry, gentle humor and common sense.

Longtime church member Barbara Beuschlein remembers the Rev. Turner pulling coins from behind his ears or performing other magic tricks when groups of children were present at church gatherings.

"I thought he had a great sense of humor," she said. "That was important, that he not take himself too seriously."

The Rev. Catherine Foote, a minister at University Congregational who joined the church about five years ago, recalled how the Rev. Turner welcomed her so warmly. "The first time I met him was like I'd known him for a while," she said. "He was just so easy to know."

Church members loved to tell her Dale Turner stories. "Warm and wonderful stories about him showing up the night a child broke his leg with a book to read and well wishes," or how he would always greet people — even those he'd barely met — by name. "He set a standard of ministry here that has just been stunning."

The Rev. Turner also felt the church had an obligation to take a stand on moral issues, and he spoke out in support of the civil-rights movement and gay rights, and in opposition to the Vietnam War — or any war.

The Rev. Sam McKinney, pastor emeritus at Mount Zion Baptist Church, once recalled that the Rev. Turner would send him a handwritten note during the civil-rights era "whenever I would do something he would consider significant."

The Rev. Turner, McKinney said, was "a steadying influence. ... not caught up in being glib, smooth, showy, but very articulate and to the point, bringing to bear all his intellectual strength in any situation that's in front of him."

Over the years, the Rev. Turner was pastor, adviser or friend to some of the city's most influential citizens, including Alan Mulally, chief executive of Boeing's commercial-airplane division.

Mulally, who grew up in the Rev. Turner's church in Lawrence, Kan., said that when he came to Seattle to work for Boeing around 1969, the minister took him on a tour of the city. Their first stop: several hospitals where Turner was visiting patients.

"He was a mentor and an inspiration," Mulally said.

Bruce Nordstrom, former chairman of Nordstrom's board, was part of a group that helped set up a retirement fund for Dale and Leone Turner.

"Dale is the dictionary definition of what a pastor to a flock should be," he said in an earlier interview. "He didn't charge for a lot of things he did — weddings, funerals. He'd just do them. ... He's the finest man I've ever met."

After the Rev. Turner's retirement from University Congregational, he began writing a weekly faith column for The Times. Readers from various faiths — and some who subscribed to no particular faith at all — embraced his writings. Many sent him personal cards and notes of appreciation, which he saved in boxes that eventually filled his office. To each correspondent, he replied with a handwritten note.

Alex MacLeod, former managing editor of The Times, who hired the Rev. Turner to write the column, edited and collected his columns into booklets and suggested naming the first one "Words of Wisdom."

"Dale clearly resisted that," said MacLeod. "He felt it was inappropriate for his writing to be perceived as wisdom. It was his basic humility."

MacLeod prevailed, though the Rev. Turner got to name most of the booklets that followed. "I felt a very gentle guiding hand from him all my life," said MacLeod, expressing admiration for "the intellect, heart, courage and persistence — just the goodness of the man."

When the Rev. Turner retired as a columnist in early 2005, letters poured in to the newspaper from readers who thanked him for helping them through an illness or divorce or the death of a loved one, or simply for having shared an inspirational message.

"Dale showed all of us how the power of the press could be used to enrich people's lives, to enlighten them, to build community and understanding," said David Boardman, Seattle Times managing editor. "His words brought grace and beauty to pages too often filled with despair. His legacy will endure at The Times."

Reader Rita Schaab of Mercer Island said the Rev. Turner's words comforted her during the death of a brother and while she was caring for a relative with mental illness. "He had a poem about having a smile on your face, and your life will be full of grace. That got me through some very sad times."

"I'm so sad he's gone," she said, "but he left so many wonderful words for people to still be able to share."

In addition to his wife and son Chuck Turner of Shoreline, the Rev. Turner is survived by sons Drew Turner of Mercer Island and the Rev. Greg Turner of Seattle; eight grandchildren and two great-grandchildren. Another son, Robert Turner, a graphic artist, died in 1994.

A public memorial service is scheduled for 2 p.m. June 17 at University Congregational United Church of Christ, 4515 16th Ave. N.E., Seattle 98105-4201. The Revs Don Mackenzie, Catherine Foote and Peter Ilgenfritz will preside. In lieu of flowers, contributions may be made to: The Dale Turner Legacy at the church address above.

A public memorial service is scheduled for 2 p.m. June 17 at University Congregational United Church of Christ, 4515 16th Ave. N.E., Seattle 98105-4201. The Revs Don Mackenzie, Catherine Foote and Peter Ilgenfritz will preside. In lieu of flowers, contributions may be made to: The Dale Turner Legacy at the church address above.