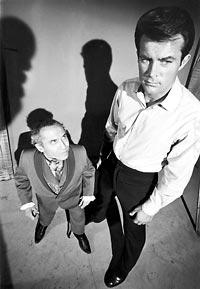 Pity the hayseed who associates "The Wild Wild West" with the 1999 Will Smith theatrical bomb.

With that dust settled, the long-anticipated first season of the original TV series starring Robert Conrad and Ross Martin finally busts out on a 40th anniversary DVD edition today (Paramount, $49.99). (It was ranked fifth at Amazon.com Tuesday.) Originally conceived as James Bond in the West, the show became an unforgettably stylized blend of Jules Verne-type fantasy, gadgets, humor and blazing, chair-shattering, donnybrook action.

To avoid overloading a single room with testosterone, I went a couple of rounds by phone with TV's greatest action star — who also led the "Black Sheep Squadron," went all Bobby Knight in "Battle of the Network Stars," and whose legendary commercial daring you to knock the battery off his shoulder is included as a DVD extra. The "semi-retired" Conrad, 71 and still pugnacious, spoke from his Thousand Oaks, Calif., home.

You'd have to be tough to wear that little outfit, right?

Or thin. You have to be tough to do those stunts.

The show's stunts — which you choreographed and performed — haven't been matched since.

No, I don't think so. What we did was, I took a group of men who were all qualified athletes. This group of stunt people would be in every episode, and we had a joke: We would cast the roles to fit the stunt men's wardrobe.

What did you think seeing them again 40 years later?

(Laughs.) That's what I think. I think they're very entertaining. I think seeing me in that role is amusing. It's funny. I laugh. I have a good time.

Martin was quite a Renaissance man.

Well, he was an attorney, and he gave up a law practice. He loved show business, and he spoke five languages fluently. And I had occasion to hear him speak French, Polish, German, Russian and Spanish, and it was a joy. People would come on the set from different countries because our show was all over the world. Ross would fall right into whatever it was they were speaking, and fluently. And he took his acting very seriously. He was on "The Tonight Show" and he said to Johnny Carson, "I do my own acting; Bob does his own stunts." Which I thought was a great cheap shot.

"Wild Wild West" had the best villain of all time: Dr. Miguelito Loveless.

Yeah, he used to stay at my house. He lived in New York and did nine shows, and he was sleeping in one of the guest bedrooms that we had, and my son came in the bedroom going, "Daddy, daddy!" I said, "What?" He said, "There's a little man in my bed!" I said, "Well take it easy. That's my friend Michael Dunn." He said, "But he's a little man!" He's not that little. He's 3-feet-8, weighed 78 pounds.

What kind of guy was he?

He was tough. We had these football games, full contact touch, every Saturday after a week of shooting. Michael got a golf cart and became the referee, and he'd go up and down the field in the golf cart with a stopwatch calling the shots. And we all went to the bar afterwards and had a couple of brewskies, and he had what was called a "Michael Dunn." It was three different shots of bourbon. He had to sit up at the bar like anyone else. He didn't want a little special chair. He didn't want to be called a midget. He was a dwarf. And I said, "What's the difference?" He said, "Our hands are man-sized, our head is, and so is our [expletive]."

In one version of the famous animated opening, West punches out a woman trying to stab him. In another, the woman just swoons. Why the change?

Jim West's pop-out sleeve gun has to be the most-wanted of all boy's toys.

Yeah, it was, and the one that was in the heel of my boot, too, they wanted.

Did you save any of that cool stuff?

No, I let it all go to auction. The last rodeo I did, there was a young boy who was limited, paralyzed below the waist, and I rode up to him on the horse in the arena and I took my hat off and I put it on his head. And then I rode out of the rodeo and that was the end of James West.

You accepted the Golden Turkey for the Will Smith movie. Can you sum up your feelings about it?

Do you think the badness of that movie kept your show from hitting DVD sooner?

I think it might have entered into it. The movie was — from what I've read, having not seen it — pathetic, and I think it sort of influenced the late sale of this. It's 40 years later, it's a nice 40th anniversary. The Will Smith movie has died out. Well, of course, it never got any momentum, anyway. You take a classic and then you ruin it. I don't want people to think that this DVD is the Will Smith movie. Please, God.

Does the show still have a lot of fans?

Not since last night in the men's room.

Wait a second! I think we have a disconnect here. What now?

My daughter took me to dinner at a delicatessen and I went in the men's room, and the guy says, "Hey, I loved you on 'Wild West.' Is that injury from doing stunts?" And I said, "No, it's a bed sore." I had surgery on my knee and they gave me a bed sore while I was in the hospital.

Have you been a lifelong Republican?

No. I was a Democrat until I reached the age of reason. Then I became a Republican.

That seems rare among actors. How has that affected you?

We are rare. There's a small group, and a lot of the Republican actors don't want to go public because there are so many liberal producers and directors who might in fact not hire them because of their politics. But I managed fortunately over the last — it'll be 50 years next June — to pretty well guide my career the way I wanted it to go. So subsequently it may have affected me, I may have lost some parts because I'm a staunch Republican.

Let's just say that, theoretically, I had a battery here on my shoulder. What would you want to do?

Well, I'd think you need help. I'd do whatever I could to see that you got help. 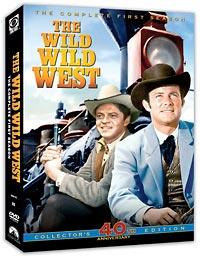