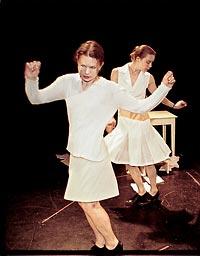 Dancing together is easier than dancing alone.

But after working side-by-side for a dozen years, Dayna Hanson and Gaelen Hanson are saying goodbye.

The multitalented duo founded 33 Fainting Spells in 1994. And although they're drawing the curtains on their dance-theater company, the two will continue on with solo careers.

After a period of "intense and sustained collaboration," Dayna said, "we both felt the time was right to open things up to the possibility to do independent projects."

The pair remain friends, but "as a company, I think that we've run our course," said Gaelen.

As co-artistic directors of 33 Fainting Spells, Gaelen and Dayna created highly conceptualized pieces that emphasized bold movements; celebrated theatricality; and, in their most recent productions, explored the interplay of dance, film and live performance.

Over the years, they've injected their daring vitality into Seattle's contemporary dance scene, and with each successive innovation, challenged audiences to stretch with them.

Dayna and Gaelen are not related.

Meticulous and organized, Dayna works on her laptop in a home office overlooking a residential street in Madrona. As a single mother with two adolescent boys and an ailing dog, she's a pro at multitasking.

Gaelen is soft-spoken and easy-going. She's wondering what it would have been like if her mother had been a country singer instead of an international relations professor at the University of Connecticut. And she's been writing songs with her boyfriend, who runs a wholesale native plant nursery on Vashon Island.

Gaelen's not quite sure how old she is without doing the math. "Dayna's the one to ask about dates," she said.

They met in 1993 at a choreography workshop where Gaelen was a participant and Dayna a facilitator. Gaelen had recently moved to Seattle. And Dayna had just given birth to her second child, Linus.

Sharing the same last name only added to "the enchanted circumstance of meeting," Dayna said. "It was part of the kismet, but not enough to call the company 'Hanson and Hanson.'"

With no formal training in dance, Dayna had already been pursuing a career in performance for seven years.

And Gaelen, who'd been studying dance ever since she can remember, had recently returned to the States after completing her graduate degree in dance theater at the European Dance Development Center in Arnhem, Netherlands.

Immediately drawn to each other by similar interests and complementary backgrounds, they began to dream.

"I have this vivid memory of being in Gaelen's living room on this gigantic dining table," Dayna said of their first collaborative brainstorm.

That session grew into an 11-minute duet.

Gaelen and Dayna performed "Tsigane" for the Northwest New Works Festival at On The Boards in 1994. The short piece was not only a big hit, but it also became the cornerstone of 33 Fainting Spell's signature piece — "The Uninvited," their first evening-length work, set to music by Ravel and others.

"The Uninvited" (1996), which premiered in Seattle, immediately opened the door for Dayna and Gaelen. They took the piece to Portland, Texas, Ohio, New York City and even to Frankfurt, Germany.

"There was this charmed beginning there," Dayna said. "It's kind of strange, within a year, to have an evening-length piece that goes on tour internationally. It just doesn't happen that often."

The success came so quickly, they had to scramble to find a name. 33 Fainting Spells — which refers to how many times Chekhov's heroines fainted in his plays — is the title of a production by Russian theater director Vsevolod Meyerhold. They admired his emphasis on dramatic physical movement that was so full of narrative, said Dayna.

Now that the artists had a name and a dance, all they needed was a company, which they formed in 1994.

"It felt pretty overwhelming at first," said Gaelen. "We had no support system in place. We had no administrative help. We didn't even have a regular rehearsal or office space."

Dayna remembers rehearsing with that big table. "I can't believe we actually dragged it from studio to studio," she said. "There was nothing stopping us at that point. We were young, and we were very passionate about what we were doing.

"We were nomadic at that time. It was a hardship that we didn't even question. I think it's an illustration of the determination that we had from the beginning. And then we just kind of got going."

They made six pieces over the next 11 years.

"It was quite a tenure," Dayna said. "It was very rich, and we challenged each other to think in different ways and consequently made work that neither of us could have imagined."

"We made lots of pieces and, in my mind, they were strikingly different," Gaelen said.

In 1997, the choreographers followed "The Uninvited" with "Sorrow's Sister," a World War II tragedy.

"In the next work, we wanted to abandon the idea of a linear narrative simply to see what the other side of the coin would be like," Gaelen said. " 'Maria the Storm Cloud' was very episodic," she said of the 1998 dance, "a bunch of different situations revolving around a theme."

"We kind of killed ourselves doing it," Dayna said of the production, which played at the Moore Theatre in Seattle. "It was a real high because we had sold-out audiences, and we reached more people than we ever had before, but there was something kind of uptight about the piece."

A fish was at fault. As part of each performance, a dancer had to fry a trout.

So every stop required trout-shopping.

"We were enslaved to our props," Dayna said.

They abandoned stressful logistics in "Dirty Work," the 2002 piece about age, regret and performance.

"It was messy," Gaelen said. "We were interested in exposing the seams, exposing what normally would be kept from the audience."

The group's final tour, of "Our Little Sunbeam," ended last March in Miami. This 2004 work imagined what would happen if Chekov's "Ivanov" had met the U.S. space program.

Lane Czaplinski, artistic director of On The Boards, admits that he's been a 33 Fainting Spells groupie since he caught his first performance eight years ago.

"They cleverly used choreography, both modern and pedestrian movements, as well as text and music in very low-fi, yet tremendously effective ways, " he said.

But they've also contributed to the field in other ways, Czaplinski said. "33 has served as a tremendous role model for how artists can live outside of New York and achieve national and international reputations."

Gaelen Hanson's name has replaced 33 Fainting Spells' in the directory at Odd Fellows Building, the four-story structure on Capitol Hill that's home to a bevy of arts groups.

Although 33 Fainting Spells will formally disband at the end of this year, Dayna and Gaelen have been creating pieces as individuals since "Our Little Sunbeam" wrapped.

It seems natural that both of them are making movies (the two founded New Dance Cinema, a festival for contemporary dance film, in 1999). Each of the artists premiered a short at the Seattle International Film Festival last week ("Diesel Engine" is an experimental dance film by Dayna, and "Your Lights Are Out or Burning Badly," a dance film inspired by a solo from "Our Little Sunbeam," by Gaelen). Dayna also produced the documentary "Walking to Werner."

Gaelen's been writing country-music songs and preparing for the premiere of the dance/theater/mockumentary performance "Betty Crump: Know Her, Love Her" for this year's Northwest New Works Festival.

In October, the choreographer begins a two-month Alpert/MacDowell fellowship in New Hampshire, then dances in another new piece, "Mountain," at On The Boards in April 2007.

"I'm enjoying the feeling of having less strapped to my back," said Gaelen, who's 38. "I have more freedom, more flexibility with the choices I'm going to make about when I'm going to do what."

And Dayna, who just won the Guggenheim Fellowship last month, is finishing her first screenplay, "The Woman, the Kid and the Guy." In November, she'll be unveiling "We Never Like Talking About the End" at On The Boards. Both pieces incorporate the research that she's been doing about near-death experiences.

"It's an appropriate time for me to be more ambitious than I have been. I'm 42, and I feel that there are some big things that I want to do."

It's a new journey, Dayna said. "I basically feel very psyched and scared, too. Ultimately, it's confidence and faith and vision. We're not starting from scratch, and I'm keenly aware of that." 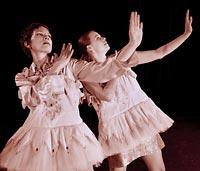 In 2002's "Dirty Work," which explored the themes of age, regret and the art of performance. (PETER MUMFORD)
On the Web

For more information, including photos and videos of 33 Fainting Spells, go to www.33faintingspells.org.