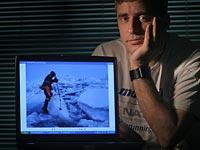 Kieffer in his Seattle condo after his 14-day walk from Alaska to Russia. (ELLEN M. BANNER / THE SEATTLE TIMES)
By Susan Gilmore
Seattle Times staff reporter

He walked to the music of movie soundtracks, mile after mile over — and through — the frozen waters of the Bering Strait.

Sometimes he swam; sometimes he skied. He never gave up hope he and his partner would reach Russia and become the first people in modern times to cross from Alaska into Russia by foot.

After 14 grueling days, Dimitri Kieffer and Karl Bushby reached their goal, but their visit to Russia lasted far longer than they'd anticipated. The pair were detained for 54 days after they were apprehended for visa violations.

Kieffer is now back home in Seattle. He limps because of an infection he picked up in Russia, and the middle finger on his left hand is shrunken from frostbite. But he's already planning his next adventure, a 400-mile kayak trip from Whitehorse to Dawson City in the Canadian Yukon later this month.

"I enjoy this part of my life, and I want to keep it going for a while," said Kieffer, 40, a retired Microsoft manager who has traveled the world in search of adventures.

"There were a lot of points where we thought we wouldn't make it," he said of his Arctic trip. "Until the very end it was much suspense. It was a lot of fun, but it was a lot of work."

Kieffer met Bushby in 2005 when Kieffer was doing the 1,100-mile Iditarod race, from Anchorage to Nome, by foot. Bushby, a British citizen who is trying to walk across the world, was walking toward the Bering Sea from Fairbanks.

When Bushby told Kieffer he planned to walk across the Bering Sea into Russia, they realized he shouldn't do it alone, and Kieffer agreed to accompany him.

It took about a year before they embarked on their trip, leaving Nome on March 17. They took enough food for 15 days, and they arranged for food to be dropped by the Russian border if the trek took longer than expected.

While it's only 56 miles across the Bering Strait, Kieffer said he and Bushby — often riding on moving ice — traveled 200 circuitous miles.

Once, they ran into trouble when they pitched their tent on a block of ice and awoke to find the ice had broken free in a storm. They drifted for 36 hours until rescued by a helicopter they called in with their satellite phone.

Kieffer went to Nome to be treated for frostbite and later reconnected with Bushby to continue their walk to Russia. He said they had to swim five days through the slushy ice, wearing dry suits. Bushby later told the British press that twice he feared he would die.

Born in France, Kieffer visited Seattle as an exchange student and graduated from Puyallup High School and later the University of Washington. Last year he obtained his American citizenship.

At Microsoft, Kieffer negotiated contracts with countries in the Middle East and Asia. He left in 2004 to become a full-time adventure traveler.

Picking their route across the Bering sea, in temperatures that reached 30 degrees below zero, wasn't easy. Kieffer and Bushby pulled a 400-pound sled and would scramble onto blocks of moving ice that sometimes traveled as fast as 5 mph, not knowing where the ice would land. Kieffer said he wouldn't swim unless they could see the next block of ice, and they sometimes had to use ice axes to traverse the ice blocks.

The scariest day, he said, was the night they pitched their tent and the ice broke apart under it. They had to scramble to stay out of the water.

With the Russian coast still 20 miles away, the pair believed their food might not last. So they began ditching food and equipment, about $8,000 worth, so they could move faster. They dropped one of their two guns and the next day saw two polar bears.

Because they had sponsors, Kieffer said he spent only about $5,000 on the trip.

When Kieffer and Bushby landed in Russia they saw an antenna and worried they'd stumbled into a Russian military base. They hadn't, but they were still in trouble.

Kieffer said the visa he obtained before he left Seattle only allowed him to enter the country through Moscow, which he didn't know. Instead they landed at the tiny village of Uelen, near the point where the Bering Sea meets the Chukchi Sea.

They were detained for 54 days, threatened with deportation. Kieffer had never been arrested; he didn't want a mark on his record. So they fought the deportation order and won, catching a flight from Russia to Nome on May 24.

The authorities returned all their gear, except pictures they'd taken of Russian border guards.

As for his future plans, Kieffer, who said he is one-quarter Russian, wants to return to Russia from the point where he left and bicycle to France.

"The reason I did all this stuff is I loved the outdoors," he said. He left Microsoft because holding a job and running across Africa were not compatible.

That's not to say he's retired forever. He said he'd like to work for a volunteer organization, but he figured he only had so many years left for adventures. "There's no way I could train and prepare with a real job," he said.

Eventually, Kieffer said, he may write a book about his adventures.

Kieffer said that when he was in the Alaskan town of Wales, a villager bet him $100 that he couldn't make the crossing. "I'm not planning on collecting the debt," he said. "But I would have paid if I hadn't made it." 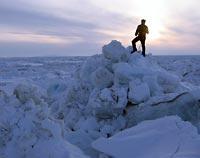 Seattle resident Dimitri Kieffer stands atop a mound of ice and surveys the miles left to travel across the Bering Strait. (KARL BUSHBY)

The retired Microsoft manager had to swim through ice fields on his trek across the Bering Strait. (KARL BUSHBY) 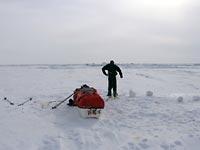 Dimitri Kieffer pulls a 400-pound sled across the Bering Strait. When the Russian coast was 20 miles away, Kieffer and his traveling partner believed their food might not last. So they began ditching food and equipment so they could move faster. (KARL BUSHBY)