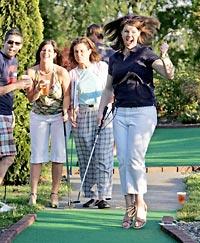 Some golf shots zip, soar, arc or zoom, but that one Dede Abood just hit with a blue-headed putter might be described as "meandering."

The pumpkin-orange ball weaves to the right, then left, then right again on this second hole at Interbay Golf Center's putting course.

And just when it seems to be running out of steam, it disappears. Right into the cup. For a hole-in-one.

"Yessss!" shouts Abood. "Yessss!" echo her teammates, celebrating with high fives, partly because the shot wins Abood her next glass of beer.

This is an Underdog moment.

They're happening all over Seattle. On beaches. In parks. On football fields and softball diamonds.

Sure, they'd like to win. Who wouldn't? But the true Underdog looks for camaraderie first, competition second.

This year, more than 6,500 Seattle-area residents — up from about 5,000 last year — are expected play in at least one of the "laid-back leagues for everyday players" organized by Underdog Sports Leagues.

"It's doing something that's like a childhood activity, like kickball or putt-putt or dodgeball, but actually doing it in a league. It's hilarious," said Abood. "It's the funniest thing when my dad asks me how my putt-putt team is doing."

The eight sports offered range from the casual (not many calories are shed on the putting course, especially with that bar in the middle of the layout) to the vigorous (yes, that's real sweat on the brows of the volleyball players). And the typical Underdog plays more than one.

Abood joined a kickball team last year and expanded into miniature golf this year. While some Underdogs are sports novices, Abood, a "40-ish" event planner, has school or summer-camp experience in swimming, archery, hockey, tennis and softball.

At Alki Beach one evening last week, Morgan Hellar, 28, an office manager, said she plays Underdog volleyball because "people are out here to have fun. They're not trying to prove they're the best and can hit it the hardest. They're here to get away from the TV, to go outside in the evening and do something that's active."

And when an errant shot slipped off her wrists and spun into the sand, she identified what may be the essence of the Underdog experience: "What's nice," she said, "is that nobody gets mad if you miss."

So just who are these Underdogs?

They are Craig Soucy, 38, a firefighter, who saw the golf posters at the Interbay driving range and put together a team including his fiancée, a neighbor couple and some friends.

They are Kate Sullivan, 25, a financial portfolio manager, who started with Underdog volleyball last year and has expanded into soccer, bowling and flag football. "We don't really have positions in football. I just run around and try to make as many catches as I can."

And they are Robert Ludwig, 36, a financial consultant, and Lani McLauchlin, 24, an account-relations manager, who've been dating since they met in the volleyball league last year.

Behind all this activity is Shawn Madden, 28, the creator of Underdog Sports Leagues, whose business card identifies him as its "Ambassador of Fun."

They way Madden sees it, 30 percent of adults just aren't into sports, while 20 percent are so intensely competitive they demand a lot of themselves and their teammates. That leaves 50 percent as potential Underdogs, "people who enjoy sports and doing something athletic, but don't want to take it too seriously."

Underdogs range in age from 21 (the minimum allowed) to a 61-year-old kick-baller, with the bulk of players between 24 and 40.

What attracted Sullivan, who heard about Underdog volleyball from a co-worker, is that people who don't have their own team can sign up as individuals and get placed on an "indy" team.

"It was a little intimidating, but everybody is so welcoming you get over it really quickly," she said.

The price varies with the sport. Volleyball, for example, is $350 for a team, $75 for an individual. The league arranges for use of the parks, sets up the equipment, staffs the games and posts the results on its Web site.

Among Underdog's biggest successes is kickball, enjoying a nationwide revival. It's grown from 20 teams in 2003 to a projected 234 this year.

Miniature golf, also booming, has grown from 19 teams to a projected 122 teams in the same period.

If meeting new people is a big part of the draw, is this all one big singles' party?

Connections do happen, says Madden, who attended the wedding of a couple who met at Underdog bowling, but he insists he's not in the matchmaking business.

"People who have come into the league in the past with that expectation have often been really disappointed," he said.

All Underdog sports are coed, except flag football, which has both an all-male and a coed league.

Madden started the company in 2001 after a local sports league went out of business leaving its players looking for referees, a structure and an organization.

And it wouldn't still fit, anyway: last year, the company started leagues in Portland, where it offers bowling, kickball and mini-golf.

Madden has also expanded into corporate tournaments and private events. He now has a full-time staff of seven and about 40 part-time referees and league supervisors.

But Madden says the league also rewards teams for other achievements, posting their photos on the league's Web site for the best name or most interesting outfits.

"We'll always have champs in our leagues and they get cards saying they're champs. But most people — I wouldn't say they want to lose, but they don't mind if they don't win," Madden said.

Some Underdogs have split personalities. Eric Zenoni, 33, is an architect who plays volleyball twice a week. On Monday, he's in an Underdog league and on Thursday, he's in a more competition-driven Jet City Sports league.

"It's actually nice to be in two leagues that focus on two different things," he said. "On Thursdays, I'm there to win. We want to win the championship and we play as hard as possible. On Mondays, it's more to enjoy the people and just have fun."

Shawn Madden started Underdog Sports Leagues for people who like sports "but don't want to take it too seriously." (JIM BATES / THE SEATTLE TIMES)
Who's an Underdog?

Signs that you are probably an Underdog:

Your pre-game preparation consists of remembering where you left your glove and cleats.

You remember half the lines from "Office Space" and "Caddy Shack" but often forget what your team record is.

Whenever you move to a new apartment you always have at least two or three cardboard boxes marked "Sports Trophies 1997-99" on the outside.

You often run late to games because negotiations between your agent and a major sports apparel company in Oregon ran longer than expected.

Your response to a teammate dropping a big pass is to make a notation on your clipboard that they run extra sprints during your next scheduled team practice — at 6:30 a.m.

On tap for Underdogs

Resuming in the fall: Bowling, dodgeball and indoor volleyball.