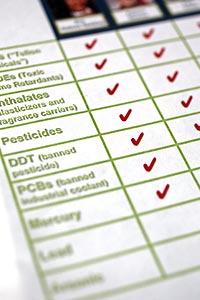 A handout shows some of the substances found in the blood, hair and urine of study participants. (JOHN LOK / THE SEATTLE TIMES)
By Warren Cornwall
Seattle Times staff reporter

A state senator stopped using his nonstick cookware. A Seattle surgeon started insisting that people take off their shoes when entering her home. A local environmentalist is drastically reducing his consumption of halibut and tuna.

Each had their own way of responding to news that their body contained traces of toxic chemicals and metals.

A new study released Tuesday by environmental and health groups calling themselves the Toxic-Free Legacy Coalition found the fingerprints of industrial life inside 10 participants. The residues included plastic compounds, fire retardants, mercury and pesticides — all of which are suspected of causing health problems at high-enough doses.

The results aren't surprising, given a host of other studies that have documented man-made chemicals in the bodies of Americans. Many of the chemicals are found in common household items such as shampoos, computers and produce. The chemical industry says that just because the substances are in people's bodies doesn't mean they're harmful.

But people who agreed to be tested for the study found the results had turned an abstract idea very personal. Responses varied, but many shared a common frustration: Their bodies harbor unwanted chemicals that they didn't know they were ingesting.

"I know on the one hand that there are toxins that persist, but I certainly wasn't obsessing about whether I had these toxins in there," said Dr. Patricia Dawson, a breast-cancer surgeon with the Swedish Cancer Institute. "But when I got the results, it was surprising."

Now she is getting strict about people taking off shoes when they enter her house to keep from tracking in contaminants.

The groups behind the report are hoping it will spur efforts to pressure industries to use safer chemicals. Erika Schreder of the Washington Toxics Coalition said the state should require manufacturers to disclose the chemicals they use and their health effects.

Sarah Brozena of the American Chemistry Council said calls for such new regulations were "misplaced." There are already plenty of laws to monitor chemicals, she noted.

But state Sen. Bill Finkbeiner, a Kirkland Republican who participated in the study, said he thinks there ought to be a "more systematic approach."

He said he stopped cooking with a nonstick pan after learning his blood contained high levels of a potentially cancer-causing chemical used to make nonstick cookware.

Nonetheless, Finkbeiner won't pursue the issue in the Legislature next year. He's not seeking re-election.

Even before the test, Allyson Schrier had taken steps to limit her chemical exposure.

The children's-book writer and environmental activist installed an expensive filter on the well at her home outside Fall City to screen out arsenic. Her family eats mostly organic food. Recently, she quit using a skin lotion she had used since she was a teenager out of concern that it might have phthalates, a common ingredient in cosmetics.

And yet the study found mercury in her hair, fire retardants in her blood and phthalates in her urine.

Sometimes it can seem overwhelming, Schrier said. The other night, she was reading the toxics report in bed and thinking about the chemicals that might have been in the bag of microwave popcorn she had given to her kids, and the possibility that toxic flame retardants are in her mattress.

"You can make yourself crazy," she said.

Denis Hayes, president of Seattle's Bullitt Foundation and one of the organizers of the first Earth Day, said he has cut back on halibut, tuna and shrimp after the test found he had mercury levels far higher than any of the other participants.

People need to keep in mind that health effects depend on how big a dose a person gets, cautioned David Eaton, a University of Washington toxicologist who was not involved in the report.

Much is known about the health effects of mercury, arsenic or PCBs. But there's less certainty about the safety of other chemicals such as the phthalates and fire retardants, Eaton said.

"It's sort of prudence without paranoia," he said.

"You can hurt yourself a lot more just with the stress of the worry than the injury from the chemicals themselves."

Dr. Patricia Dawson has become stricter about not allowing shoes to be worn in her Seward Park home, hoping to reduce contaminants after tests found toxic chemicals in her body. (JOHN LOK / THE SEATTLE TIMES)
Test participants