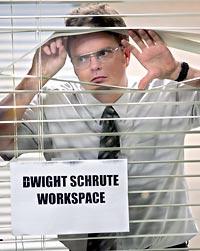 Wilson, now 38, won the part of innocent Arthur after playing one of the show's signature stiffs at the opening of an episode in season one.

"Then I auditioned for one of the choir members" — fans will remember that David Fisher was a proud member of the L.A. Gay Men's Chorus — "and when I saw they were auditioning Arthur, too, asked if I could audition."

After he landed the role, Wilson's manager said, "Your whole life could change."

And then it did.

On "The Office," he plays either "Assistant Manager" Dwight Schrute (Dwight's words), or "assistant to the manager," which his smarmy boss, Michael Scott (Steve Carell), calls him.

"I used the central aspect of Mackenzie's character — that pompousness, self-superior-ness, the love of hierarchy, the way his mind could be so mind-bogglingly dull in some ways and brilliant in others — and I just ran with it."

Wilson, a fan of the English series, said the cast believed the U.S. version "needed to be faster, funnier and more American, while holding onto the brilliant comic premise." The show, created by Ricky Gervais (who played ludicrous boss David Brent in the U.K.), is, Wilson says, "a mix of tragedy and comedy and pathos and absurdity with the beautiful use of the awkward pause as a defining comic moment."

Where Rainn comes from

Born at the University of Washington Medical Center, Wilson says even his first name was influenced by his Northwest roots.

"My dad wanted to name me Rainer after Rainer Maria Rilke, the famous German poet, but thought that having Mount Rainier so nearby would confuse things, so he went for Rainn. God only knows why he added the extra 'n.' 'Rain' was probably too hippie-ish, even for him."

He grew up in Lake Forest Park and attended Shorecrest High School until he was 16. His devout Baha'i parents got jobs in Chicago at the Baha'i National Headquarters. (Wilson also is a follower: "I give a big Baha'i shout-out to my Seattle Baha'i peeps!") He then returned to the University of Washington, where he graduated with a degree in drama in 1986.

Wilson's parents soon followed their only child back to Seattle, where his uncle owns "a Seattle institution, Jim Dandy Sewer company, where my dad has worked for 20 years."

It was at the UW that Wilson met his wife, writer Holiday Reinhorn ("Big Cats"), who grew up in Portland. They moved to New York, where Wilson matriculated in the graduate program at NYU and the couple performed in theatrical productions.

Eleven years ago, the couple married at the base of Mount St. Helens, and in 2004, their son, Walter Mckenzie, was born.

In his mind, Wilson says, "Walter is intertwined with 'The Office.' He was born during the 'Hot Girl' episode, and he always visits the set. I tell you, this kid is a natural performer. I am generally dead set against that, but he may be destined to be an actor. He's always doing things to make people laugh."

The family's annual Pacific Northwest visits include stopping by the Pike Place Market, where Wilson's mother sells handcrafted silver pins and earrings at her shop, Jewelry by Kristin, in the North Arcade.

Even little Walter has his favorite Seattle spots: "We always go to Gas Works Park, which is very near my mom's house. We love Green Lake, and our old stomping grounds, Wallingford, Fremont, the University District."

Wilson also has a soft spot for 13 Coins, the campy 24-hour restaurant that is "right out of 1962. I keep expecting to run into Sammy Davis Jr. there. It's full of fisherman who've come back from Alaska after five months with a bunch of money in their pocket, wanting to blow it all on fettuccini Alfredo, steaks and martinis."

It began with Schroeder

Wilson's acting interests date back to his childhood here. "My very first play was at Lake Forest Park Elementary School ... The play was 'You're a Good Man, Charlie Brown,' and I played Schroeder. I was riding my bike home from school, fell and broke several bones in my hand. The play was that night, and it was a one-night-only affair, and I walked into the auditorium in the middle of the second act, with a giant cast on my hand, to great applause, and I was hooked ever since. I felt like I saved the day."

Up next for Wilson is "Super Ex-Girlfriend," starring Luke Wilson and Uma Thurman. In the Ivan Reitman-directed film, due in late July, "I play [Wilson's] best friend and most unlikely adviser in love, sex and women."

He and Reinhorn have often talked about working together, most notably on a screenplay she's written for children.

"Holly and I have years to work together," he says. "We want to see the direction her novel goes in. I edit all her stories. She helps me on all of my auditions. We have a very collaborative relationship. I'm a good actor and OK writer, and she's an OK actor and good writer."

They're also looking to eventually buy land in central Oregon: "We're keeping our roots in the Pacific Northwest."

Terry Estudillo is a freelance writer based in Los Angeles.