Michael Moore leans on a wood and plastic prototype of one of nine doors the Seattle Opera set design team has been hired to construct for the Seattle monorail. (JIM BATES / THE SEATTLE TIMES)
By Mike Lindblom
Seattle Times staff reporter

When managers of Seattle's mangled monorail wanted nine new doors in a hurry, they didn't hire the big-time manufacturer from Europe. They called the Seattle Opera.

The decision saved three to six months — allowing the city to stick to its plan to restart the 1-mile line before the Bumbershoot festival at Seattle Center begins Sept. 2.

The opera team has tackled more epic jobs than this.

For "Macbeth," which closes Saturday night, the team built a retracting door, as part of a three-story metal wall that oozes blood. For "Parsifal," six gears lifted a stage platform like a drawbridge.

"We're used to building for safety," opera spokeswoman Rosemary Jones said. "Most of the things we build, people have to stand on them and sing. We don't want them plunging."

Eight doors on the monorail's Red Train and one on its twin Blue Train were wrecked when the trains sideswiped over Thanksgiving weekend.

Inside the opera's Renton warehouse, scenic-studios manager Michael Moore showed off the wood and plastic prototypes, in a spot once occupied by a 3-ton dragon. A few steps away are fake rocks and bloody panels, as if to symbolize the wounding of the railcars, he joked.

The 1962 monorail has provided some drama lately. It caught fire in 2004 and has stalled three times since 2002, forcing evacuations. An attempt to build a 14-mile monorail from Ballard to West Seattle has reached an anticlimax, as officials sell off station sites that will never be used.

New aluminum doors for the old monorail are expected to cost about $15,000 each, said Perry Cooper, spokesman for Seattle Center, which owns the line.

Seattle Monorail Services, which operates the trains, contacted IFE, a worldwide door supplier from Austria, but the tiny nine-door order would have been stuck in a backlog. Seattle-based Pacifica Marine, lead contractor for the $3 million-plus monorail repair project, was busy with other tasks, and an open-bid competition "would have killed our schedule," SMS Executive Director Tom Albro said.

A Center employee suggested the opera. 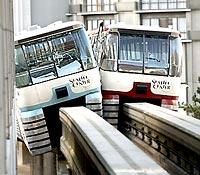