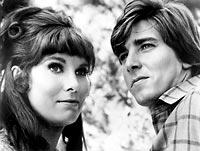 "Grey's Anatomy" may be the biggest current TV show set in Seattle, but where's the catchy theme song?

Baby boomers will be torturing their kids to the jaunty tune of "Seattle" with today's DVD release of "Here Come the Brides — The Complete First Season" (Sony, $49.95). Set in 1860s Seattle, when housing was affordable, the 1968-70 series starred alpha male Robert Brown, teen idol Bobby Sherman and pre-Starsky David Soul as the logging Bolt Brothers.

Not quite a comedy or a drama or a Western, the show had a memorable premise: To keep their workers on the job, the Bolts bring 100 marriageable women from New England, but there's a catch: The brides have to stay for a year, or conniving sawmill owner Aaron Stempel (Mark Lenard), who bankrolled the trip, takes possession of the Bolts' mountain.

For the show that put Seattle on the pop-culture map, I took a muddy stroll down memory lane with its leading lady, Bridget Hanley. Now 65 and living in Los Angeles, Hanley grew up in Edmonds and graduated from the University of Washington. As Candy Pruitt, she spoke for the brides, perpetually flustered the Bolts with petitions and became the envy of countless groupies as Sherman's love interest.

You grew up in the Seattle area, and then you went on to do a show about Seattle. There was no escape for you.

No, there wasn't, except that I had to fight to get that part. I was under contract with Screen Gems, who did it, and I had read the script and I went "Oh my gosh, I want to do this." And they just were testing everybody in town, and I kept knocking on everybody's door. "I'm here, I'm under contract, and I want to do this part. I'm from Seattle. I bite my nails. Who could be better?"

I'm not admitting anything here, but I'm guessing that, theoretically, a lot of guys who grew up with the show had crushes on you. Theoretically.

Well, but the girls all had crushes on Bobby, and the fact is that they were very wise not to marry us off during those first two seasons.

Candy Pruitt had some big hair. What was her secret?

Ohhh, the big hair. And the second year was even bigger hair. (Laughs.) With the curling iron every day, my hair was breaking off. So we then got a three-quarter wig and a little what they call a postiche. And we put all my other hair up under those. The second season I think they added two other postiches, and it saved my life, actually.

My stunt double didn't show up. And I had to drive a double-team wagon. So I drove this double team of horses and tried to hit the mark, and the horses kept freaking, and kept running around. By the third time around, I tried to brake even harder, because you can brake the wagon with reins. But the horses were so strong that they pulled me and the reins up, and I fell over the driver's side of the wagon right on my head. And if it hadn't been for those two postiches, I'd be a dead Candy Pruitt now.

The Bolt brothers — that's a name with testosterone. They had a year to accomplish their mission or lose their mountain. How did the show last two years?

Well, because they got their job done, kind of, and they wanted to see what would happen! (Trails off laughing.) And people wanted to know if Candy and Jeremy were going to get married. And it ended on a bad note. I cannot tell you how many scripts have been written by fans.

There is just a huge fan base. And they all e-mail each other. They all get together. They've been to New Bedford, Mass. They came up to Seattle. They went to Edmonds. They have been everywhere.

Bobby Sherman was prettier than most of the women in the cast.

(Giggling.) He was pretty damn good-looking.

Did he ever tell you why he retired from acting to become a paramedic?

I think he felt he had such success, and I'm not sure, because we never really talked about how it affected him. He felt that he needed to, I guess, give back. And my goodness, he has. And in fact he actually saved a fan.

There was some charity thing going on that I went to, and one of the fans of "Here Come the Brides," because I knew him and I knew her, I introduced them, and she kind of had a fainting spell. And he tended to her and did it just so gentlemanly.

The history with Robert is that he and my late husband went to The New School in New York together, and they had known each other since they were 18 years old. In fact, he was the one who told my husband, "You'd better marry her, kiddo, or you're going to lose her."

We still see each other, and he is married to a wonderful artist, and he lives in Ojai [Calif.], and he was doing a lot of voice-over. He really didn't want to be on camera anymore.

Oh, you mean like cozying up? Well, David [Soul] married Karen Carlson ["Mary Ellen"] after the pilot. Of course, Henry Beckman — Capt. Clancy — he was married to the same wonderful woman until she passed away. He now lives in Spain.

Was there as much drinking off-camera as there was on?

You know I can't tell you about that.

No, I can't. I have to be really honest with you. It would be so minor compared with everything that's going on now. I must tell you that we would have a little party at the end of every show, and we'd all tip a few and toast each other, and our wonderful cinematographer who was just our best buddy. I mean it was like a giant love-in. I don't know how else to explain it.

I think my very favorite is the pilot, because it was the beginning. And I just love my part — I just loved Candy because she had spirit and spunk.

What are you up to these days?

I do a lot of theater. I am auditioning for voice-overs all the time and stuff. I just finished a run of "The Lion in Winter," and I had gotten a part in a movie that was being shot in Japan and I couldn't go because of the play. I did a pilot a couple of years ago that didn't go. And mostly I don't want to do one-line parts. Does that make sense?

The thing is, I keep thinking that I've had such a wonderful life, a wonderful marriage, wonderful kids. I have one married daughter and another one — here comes another bride in October. I've really had a wonderful run. And I figure that when my hair goes completely white, I'll have another round of a career, I think. 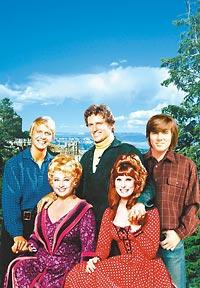